'Fastback' aside, here's how the Porsche Cayenne Coupé differs

At long last Porsche has an official player in a division it may have unofficially invented: the sport-utility-vehicle-cum-coupe 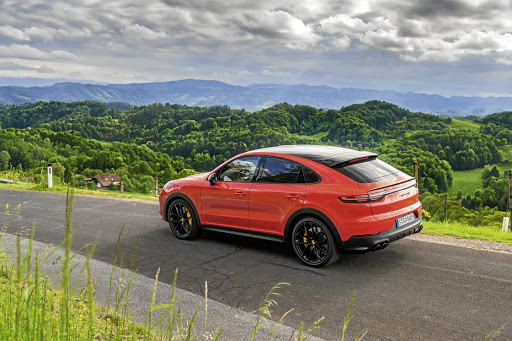 Porsche is shamefully tardy in entering the now ubiquitous sport-utility-vehicle-cum-coupe fray. Or is it a case of fashionable lateness? This (admittedly obvious) notion strikes me while driving through the Gréolières region in an arcane part of France, at the helm of the other latest model to wear the iconic golden crest.

An italicised other, because media interactions with the Taycan, their first production electric vehicle, were taking place in Germany concurrently.

The topography of the road before us resembled the electrocardiogram results of a smoker, with pointy hairpins and tricky kinks. A setting that put one in mind of Chapman's Peak Drive in Cape Town, albeit with the volume turned up to 15.

In other words, an ideal environment in which to sample a product from one of the most pedigreed performance brands on the planet. Even if they were beaten to the curve in this category by the likes of the BMW X6, Mercedes-Benz GLE-Class and more recently, the Audi Q8.

But there is an interesting counterpoint to be entertained. What if we asserted that Porsche was the first to get the jump on the niche, well before it became a thing?

Allow us to reference the 1984 Paris-Dakar rally and the rugged 953 that took first place overall. The extensively fettled contender - based on the 911 of the time - could be regarded as the literal embodiment of the sport-utility vehicle and coupe tenets. It was equal parts of both, in the truest sense. In fact, the brand fielded its sporting wares in competitive off-road exploits as far back as the 1960s.

Think of the Cayenne Coupe as a regular Cayenne that an elephant used as an ottoman, leaving it with a flatter, sloping, fastback rear

Back to the present day where a week from now South African customers will be able to consider a sleeker version of the popular, do-it-all Cayenne. Meet the Cayenne Coupe. Think of it as a regular Cayenne that an elephant used as an ottoman, leaving it with a flatter, sloping, fastback rear.

Reducing it to that simplicity in entirety would be unfair, of course, because the model also represents an intelligent business case for the bean counters - spinning a bit extra off a single yarn - in addition to offering shoppers more variety.

Porsche representatives reiterated that this is a variant to complement the line, not a standalone model. In the same vein as the Sport Turismo estate iteration of the Panamera saloon.

The aesthetic differences from the outside are glaringly clear from the side and hind perspectives. Only eagle-eyed aficionados will be able to distinguish it from the standard car when viewed face-on. The giveaway is a shallower windscreen and A-pillar position, thanks to the front roof edge being lower by 20mm.

Redesigned doors and rear wings have added 18mm to the girth. Sounds negligible, but those narrow streets of the Alpes-Maritimes accentuated the larger waistline. You would be sucking in your tummy for good measure while negotiating similarly tapered Parisian walkways.

Two spoilers are on duty on the tail. The first is fixed and the second extends when travelling at speeds upwards of 90km/h to aid downforce.

The culmination of the aesthetic rework is a package that is striking, especially in the Lava Orange signature hue, a lurid shade that is bound to have the Oros man clamouring for ambassadorship.

That said, would it have hurt to include doors with frameless windows, possibly adding even more credence to that Coupe suffix?

A trade-off with headroom would be expected, given the slanted ceiling. To remedy that, rear passengers are seated 30mm lower than in the regular Cayenne.

Luggage space is comparatively less, at 625l versus 770l. Folding the seats, however, makes way for 1,540l of capacity.

For the driver, there is very little to reinforce the distinction between default and Coupe, save for the fitment of a standard panoramic glass roof, alleviating the onset of claustrophobia.

And the same observation could be made about the way the model behaves on the road, since its technical constitution is nigh-on identical to that of its ordinary counterpart. Which is not a criticism in the slightest, as the Cayenne itself is lauded for its dynamic competencies with good reason.

The starter model is motivated by a force-fed, 2,995cc, six-cylinder (250kW and 450Nm) which promises to dispatch the 0-100km/h dash in an expedient six seconds.

Next up, the S packs a 2,894cc displacement with two turbochargers and a claimed sprint time of five seconds, with an output of 324kW and 550Nm.

A twin-turbocharged, 3,996cc V8 does duty in the Turbo, shoving out 404kW and 770Nm. It will break into that important three-digit barrier in 3.9 seconds. The Turbo S E-Hybrid uses the same heart, supplemented by an electric setup making for a combined output of 500kW and 900Nm, trimming 0.1 of a second off the acceleration time.

How much does it cost?

We drove the entry-level model and the Turbo. Our stint began in the latter and, mindful of the impressive technical highlights, it thrilled as expected.

The boisterous nature of that eight-cylinder, and the bounty of torque it proffered with the mere stretching of a big toe, made negotiating those European mountain-side roads an intense affair. Docility was not a strong suit - the Turbo never seemed to ease at the leash.

Which was where the least powerful choice endeared. This lighter, more civilised concoction proved more pleasant, especially once the novelties of hard-and-fast momentum had waned. That is not to say it faltered when a more exuberant approach was employed. The average person will find that it offers a fine balance of plushness and pace for normal commuting activities.

And perhaps the slower car is the one to pick from the Cayenne Coupe range: it will allow others more time to appreciate the style statement. Which is the essence of the experience - else you would have gone for the conventional equivalent.

FIRST DRIVE | 2019 Porsche Cayenne Coupe is made for keen drivers