Potato-power your life, say US scientists ... but watch the wind 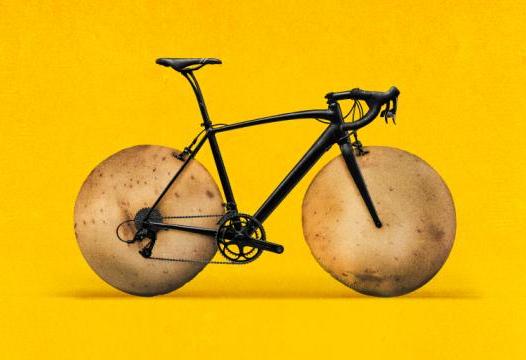 A new study of keen cyclists in the US found the carbohydrate boost from potatoes during exercise was just as effective as a sweetened carbohydrate gel.
Image: Michael Vincent

The quest for beach bodies is in full swing as spring temperatures soar, and carbohydrate gels are being tucked into pockets of amateur athletes countryside.

They’re used to sustain blood glucose levels and improve performance, but at around R55 for 60ml — enough to last an hour — they don’t come cheap.

The good news is that mashed potato works just as well, according to scientists in the US.

“Potatoes are a promising alternative for athletes because they represent a cost-effective, nutrient-dense and whole-food source of carbohydrates,” researchers from the University of Illinois reported in the Journal of Applied Physiology.

“Furthermore, they serve as a savoury race fuel option when compared [with] the high sweetness of [carbohydrate] gels.”

A team led by kinesiologist Nicholas Burd was funded by the Alliance for Potato Research & Education, and recruited 12 cyclists who averaged 267km a week.

To qualify for the trial, the cyclists had to reach a specific threshold for aerobic fitness and complete a 120-minute cycling challenge followed by a time trial.

Participants were randomly assigned to consume water alone, a carbohydrate gel or an equivalent amount of carbohydrates from potatoes.

“We found no differences between the performance of cyclists who got their carbohydrates by ingesting potatoes or gels at recommended amounts of about 60g per hour during the experiments,” Burd said.

“Both groups saw a significant boost in performance that those consuming only water did not achieve.”

Those eating potatoes experienced significantly more gastrointestinal bloating, pain and flatulence than the other groups, probably because of the volume of potato needed to supply the same carbohydrates as the gel.

Buy the best: we put supermarket potato salads to the taste test

Our judges have spoken: here's where to head to pick up a delicious ready-made side dish for your next braai
Lifestyle
2 years ago

Mbali Dlamini did not sit back when she noticed that overweight girls in her neighbourhood did not play sport because of low self-esteem and a lack ...
News
2 years ago