As a child, people couldn't look at me. It broke my heart, admits Nataniël

Now, at the height of his brilliant career, they can’t stop looking, writes Michele Magwood, who spoke to the acclaimed performer about his first full-length memoir 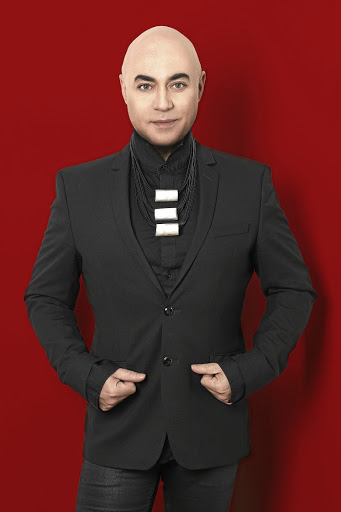 On the cover of Nataniël's new book is a photograph of a young boy in a wonky crown, brandishing a sword. The collar of his kamerjas (dressing gown) is cotton wool, the crown is cardboard. The boy believes he is a king. He'd rather have been the queen. This is the young Nataniël in his very first show.

"It's a miracle that they didn't smother me," he says. "My father said to me before he died that one of the best things he did was not kill me when he had the chance because I looked after him for the second part of his life."

Nataniël has made a career out of deadpan. His laconic, distinctive voice is slightly sibilant and runs on swiftly, swerving past punctuation. His stories are a combination of hurt and hilarity and behind the strictly constructed mask and navy eyes seethes a tart intelligence.

In a time of lookalike ubiquity he is utterly original. His Kaalkop brand is brilliant, his costumes so awing that last year there was a coffee table book dedicated to them. His live performances are always sold out, his cooking shows draw countless viewers.

What many people don't realise is that Nataniël is a superb writer. Over the years he has quietly published volumes of exceptional short stories. He writes like a bruised angel.

His new book and first full-length memoir, Look At Me, is several things: it is an affectionate memoir of an "unusual" child growing up in the Western Cape; it is a love letter to that child's grandmother; a hilarious portrait of small-town life; and, not to put too fine a point on it, a study of the nascence of artistic genius.

Nataniël's new book takes you inside his flamboyant wardrobe

'Closet' beautifully documents many of the remarkable costumes Nataniël has worn over the years. He tells us more
Lifestyle
4 years ago

The book begins, of all places, in a sandpit in a Swartland town. The small Nataniēl is sommer sitting there. "In front of me are two fat little legs with dimpled knees. They lie straight, like a doll's. These are my legs. (He sits like the dead! Grandmother always said.)"

This is the dawning of a child's self-awareness but Nataniël will remember it as just heat, sand and cat shit. "Old sand with old poo makes for a smell that I will still recognise in designer gardens forty years later."

There, in Riebeek Kasteel, he was "still in a bubble", doted on, with a little brother. His father was the town mechanic, his mother a housewife. "My problems started when I had to dress the same as the other children."

He writes about the "Big Grey" that lived in his school bag, a feeling that followed him around. It is simplistic to assume the greyness was depression. No, he says, "it was a very quiet panic. The knowledge that your spaceship landed somewhere where you don't belong and they've left, and you're still here."

Only his grandmother could banish the Big Grey. She was a doughty woman, plain and God-fearing, yet she encouraged her fey grandson, buying him paper dolls and magazines, letting him wear her jewellery. She was, he writes, "unpredictable, energetic, hospitable and unique, exactly how I would like to be remembered".

She was a critical influence on him, as was the place she and Nataniël's grandfather lived. His grandfather was what he calls the "factotum" of Hugenote Kollege in Wellington. They lived in an apartment in the rather grand old building that was one of the residences, Huis Samuel, and in the holidays Nataniël would stay with them for weeks on end, happy to escape the sports days and braais at home. 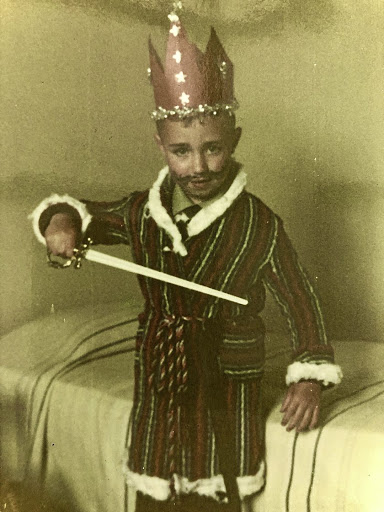 The young Nataniël ready for the throne in his very first show.
Image: Supplied

The hostel was empty at that time of the year, so he had a castle all to himself. "A bell tower, a ballroom with a grand piano, a hallway that went on longer than a sermon, with the highest ceilings a child could ever see."

His grandmother was always busy in the huge industrial kitchen. "She cooked for the poor, the crazy, the hungry, the rich, the lonely. Anyone who came by."

His grandfather didn't know quite what to do with him. "I was always in his workshop, it was like Santa's workshop, making things and wearing them.

"He'd get a shock going to the bathroom at night. I'd be in the passage dancing with flowers on my head in a Spanish skirt. He would just have a fright and he never said anything, just go about his way."

To this day Nataniël loves empty, open, white rooms, and he is obsessed with the symmetry that he first witnessed in the structure and garden of Huis Samuel.

In one of those funny, not funny anecdotes, he tells of the Christmas concerts he would organise for the extended family. "I would be Jesus, Mary and Joseph, the wise men and the stars. It was this pink, fat, strange little child covered in glitter, singing Silent Night."

He would conjure costumes from his grandmother's cupboard, with Mary looking like Mata Hari or Joseph a Viking. The last concert he remembers as a highlight: "It was the world's first nativity scene with a mermaid."

"Isn't anybody going to put a stop to it? My mother asked every year.

"Let him be, Grandmother said. Have you ever seen a happier child?"

There were some relatives, he noticed, who wouldn't, who couldn't, look at him. "Even the non-smokers would go outside and grab a cigarette so as not to look."

On the street people would avert their eyes from him. "It broke my heart later when I understood it."

Mercifully the Fates had something else in store for Nataniël: he was a musical prodigy.

"Piano was the last thing I wanted to do on earth, but in a small town the first sound you hear in church is that enormous organ playing. It's the only portal you have to something else. It was rugby or athletics or piano. Nothing else."

He plugged grimly on with the lessons that his parents could ill afford. One teacher was so dour, her house so depressing, that he longed to get at her Pierneef paintings with his crayons.

I would throw the rugby ball to the enemy to stop them touching me. We were a legendary team because we always lost in the hundreds

Nataniël on playing rugby as a child

On the subject of rugby he is achingly funny. Needless to say, he loathed playing it. "I would throw the ball to the enemy to stop them touching me. People drove to other towns to see me - we were a legendary team because we always lost in the hundreds."

At halftime he saw the other team would be bunched together. "They'd be discussing tactics or something and I would lead a prayer meeting. 'Jesus! Please let this end and we can have our NikNaks on the bus.' NikNaks had just come out. It was the highlight of the day."

"If you're normal Christian people on the platteland what you see here is not what you dream of as a first-born son."

Luckily, he says, their second son was sporty and an academic wonder. Another brother and a sister followed.

Nataniël developed a sharp eye for small-town life, for the old women called the Stoepsusters, the decrepit cinema with bursting seats, the old age home with its custard-coloured walls where he was welcomed or just ignored. No-one raised a questioning eyebrow, no-one raised a voice in command. He loved the old people. "They were irrepressible and timeless and inspired like Grandmother ... When I wasn't there I missed the things they knew." 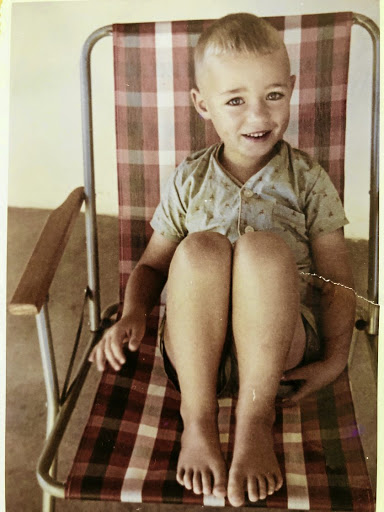 Nataniël's devoted grandmother refused to put a stop to his creativity, despite judgement from the community.
Image: Supplied

In one of the towns there was a roller-skating rink he calls the Slab of Intrigue. It was only a cafe with a stretch of cement, he says, but on Saturday evenings they played music, "not loud enough to upset the minister, just loud enough to attract awakening hormones from every block".

Only a few pale measles from the balding glitterball shimmered on the cafe wall. "A single wire with yellowish light bulbs lit the Slab. No beauty, no glory ... but here drama lurked and plots were hatched."

He was in the thrall of the touring theatre groups, the tired old divas and scuzzy revues that passed through. "These tacky circuses with one thin elephant and a lion whose legs won't work. And you'd go just for the smell of popcorn."

Nataniël, it is clear, was deeply, mortally struck by what Jean Cocteau named the "red and gold disease", the devotion to theatre.

Too soon, he ends this captivating story. Halfway through high school, before university, before his start on the stage, when he would make the scenery himself as if he was back in his grandfather's workshop.

Just as it began, so the book closes with an image of Nataniël sitting. Once again, it is an acute moment of self-awareness. He was at last coming into his own, musically, physically, intellectually. There was a new English teacher, "high cheekbones, square jaw, thick hair like a dubbed movie". He looks up at the man. "For now I remain sitting. My legs stretched out, my jacket open, my chin raised ... I'm giving you a moment. Look at me."

•'Look At Me: Recollections of a Childhood' (available in Afrikaans as 'Kyk na my') is published by Human & Rousseau, R280.

In his first and only official autobiography, published globally on October 15, music icon Elton John reveals the truth about his extraordinary life
Books
2 years ago

The stars of '#HETwo' have had some seriously strange experiences on planes. They tell us more about their travel highs and lows
Lifestyle
2 years ago