'The Morning Show' has been a great outlet for my anger: Jennifer Aniston

The A-lister seems energised since taking on her first recurring role since 'Friends', writes Margaret Gardiner 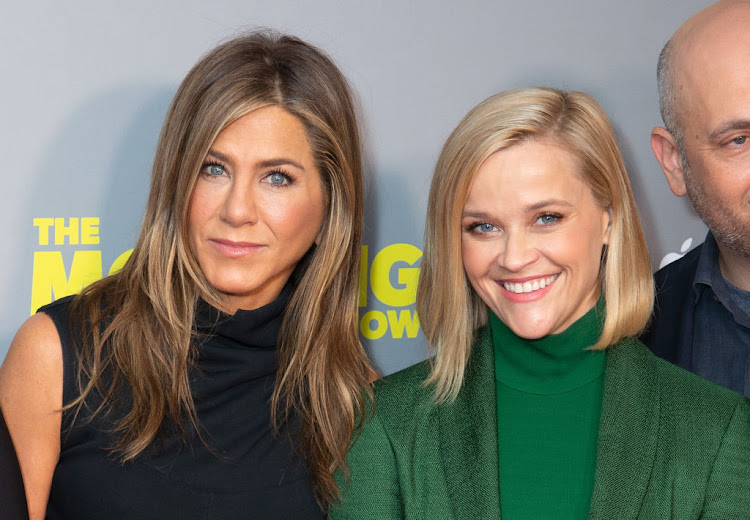 "I am powerful," asserts Jennifer Aniston. "I've learnt to fight for myself and that's not a bad thing. First you have to believe that you have something to fight for. That took a couple of years - gaining the confidence that I'm worth fighting for."

Aniston is immaculate in Maison Margiela wide-legged black pants, a Jacquemus top and Calvin Klein shoes. Her jewellery by Jillian Dempsey is like a punctuation point against her tan skin - specific, substantial, but subtle, as are the Cartier necklaces against her crew-neck T.

You get the feeling she talks to the press through layers of protection. Her hair a smooth helmet that barely moves, her face not traditionally beautiful, but attractive. Women identify with her.

Aniston's comedic timing is perfect. Her blue eyes piercing. She makes the best of what she has and she works hard. Watching what she does with a role, you know that you're watching something that isn't accidental.

You could say Aniston is back. Back on television, back working, back in the public eye.

Jennifer Aniston crashes Instagram with a little help from her 'Friends'

Jennifer Aniston literally broke the Internet when she joined Instagram on Tuesday.
Lifestyle
2 years ago

Apple is another new streaming service and The Morning Show is one of its first roll-outs. It comes with a pedigree - Reese Witherspoon co-producing and co-starring, Mimi Leder at the helm and Kerry Ehrin as the show's writer. These are powerful women with a specific viewpoint.

The show is awash in super-hit serum in the #MeToo era. A morning news show is rocked by sexual misconduct claims when the male anchor is swiftly fired and the female anchor is left to deliver the news to the US. It explores how women are judged differently and what some women will do when opportunities arise and the underdog becomes the top dog.

It's brilliantly written and allows viewers to plough a little deeper into the personality of the sphinx that was the most popular actor of the successful show Friends - a show that lives on in re-runs around the world.

Aniston seems energised. She's renewed her friendship with former husband Brad Pitt (he attended her 50th), since he parted ways with Angelina Jolie.

"I've been doing this for 30 years and I've been under the microscope for all of it," she says, referring to opinions about her and her work.

WATCH | The trailer for 'The Morning Show'

Aniston says she's not averse to occasionally googling herself.

"I do it when someone says, 'You've just had a hundred-million-dollar makeover'," she says dryly. "Then I'm like, 'Really?' That's a lot of money, I must have got an entirely new skeletal system.

"It's entertaining. I don't google myself regularly, but it's sort of interesting, the stories that come out.

"I long for the days when we didn't have iPhones and the internet. It was a simpler, more peaceful time. There were a lot of things happening in the world, but you weren't bombarded every second of the day. People wielded less power than they have access to now thanks to a few buttons."

Jennifer Aniston on the digital age

Aniston has been angry about the intrusion of the world into her life.

What does she do with her anger? She works.

"This show has been a great outlet for my anger," she says. "There have been scenes and moments in this show where I've had to go down into the dark dungeon of memories that I'd buried for a long time. I allowed the anger to be channelled in a way I wouldn't usually show.

"I don't normally lose my temper. I think that maybe it's because I grew up with raging tempers and it's not productive. It's a decision you make, you don't want to wake up the day after you've publicly exploded and see it all over YouTube."

She's a night owl who loves the quiet and stillness night time brings. Her mornings, on the other hand, start with interaction with her dogs and then meditation, followed by coffee and a workout ... and the day starts.

Aniston signed on for The Morning Show after reading a book called Top of the Morning.

"It came to Reese and me from Michael Ellenberg, our fellow producer. We decided to partner up, because Reese and I wanted to team up again."

Witherspoon played her younger sister on Friends in 2004.

The Morning Show, Aniston's first recurring role since Friends, is an examination of what goes on behind the scenes of the US morning talk shows.

"There always seemed to be a sort of a cutthroat quality about the people in the morning-show industry. It seemed like an interesting world to navigate. We sold the show and then, shortly afterwards, #MeToo happened. We had to go back to the drawing board because you couldn't not address what was going on directly," she says.

"It wrote itself in a strange way, because it was about being brave and having the conversation that no-one else was having. It revealed the private conversations that were going on behind the scenes," she says.

"Kerry Ehrin, our head writer, created these characters that are so human, so vulnerable and so raw."

•'The Morning Show' is available on Apple TV.

Princess Margaret said she was glad I got the role and told me to her smoking style right, the acclaimed British actress told Margaret Gardiner
Lifestyle
2 years ago

I wasn't sure I could pull off playing the Joker, says Joaquin Phoenix

The award-winning actor tells Margaret Gardiner that he has complex feelings about Arthur Fleck, the man who would become Batman's nemesis, the Joker
Lifestyle
2 years ago

If you want a career & a family choose your partner carefully, says Julianne Moore

The Oscar-winning actress talks to Margaret Gardiner about working with her husband on her latest film, 'After The Wedding'
Lifestyle
2 years ago