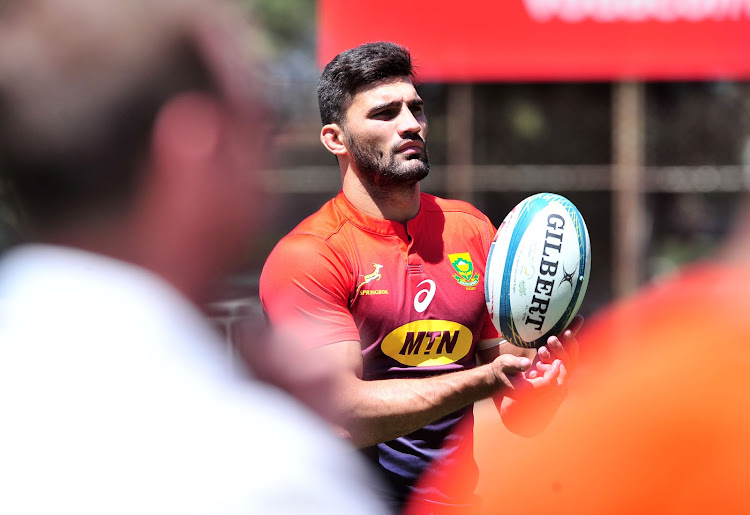 Damian de Allende of the Springboks has been voted one of the best-looking players in the world.
Image: Samuel Shivambu/BackpagePix

Springbok Damian de Allende has made the grade as one of the “hottest” rugby players in the world.

Liverugbytickets.co.uk, a premier website for rugby matches and news, asked audiences around the world to vote for their favourite rugby hotties.

De Allende has graced the covers and pages of magazines such as GQ, Men’s Health and L’Uomo Vogue.

“Excitement from the Rugby World Cup (RWC) has definitely increased interest in the sport. Not only from those wanting to learn the game, but those looking for a little eye-candy,” said LiveRugbyTickets.

“Italy’s Jayden Hayward has been voted hottest rugby player of all time — Jayden can take comfort in his team’s 12th place position in the World Cup, knowing he has won this contest,” said LiveRugbyTickets.

“George Ford claims second place with 77% of the votes — England’s flyhalf proves not only does he have the ability, but the looks too.

“New Zealand hooker Codie Taylor is third. The hunk has been chosen by 76%, proving he is no doubt pleasing on the eye to many.”

The Springboks won this year's RWC in Japan, beating England 32-12 on November 2.

Want a SA flag broek like Faf de Klerk? Well, sorry, they're all sold out ... for now

"FAF broke the internet and depleted our stock!"
Lifestyle
2 years ago

While their significant others were muddied and bloodied on the field, the wives and girlfriends of the Springbok rugby team were scoring points on ...
Lifestyle
2 years ago