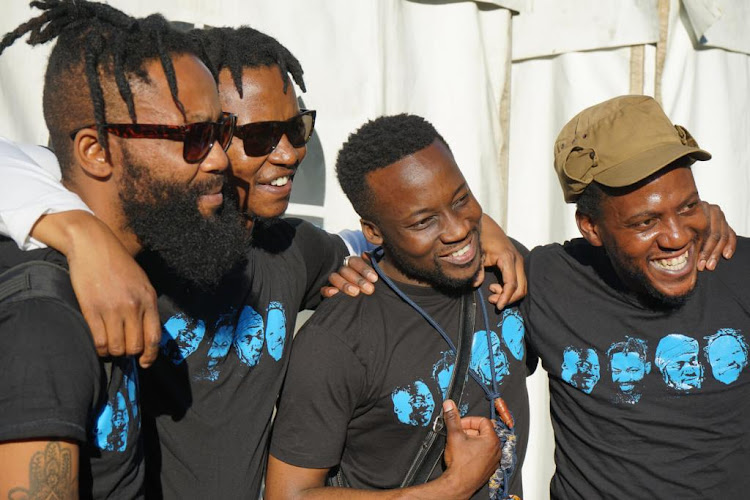 A still from the doccie, 'My Culture My Music', which is on at the Joburg Film Festival.
Image: Encounters South African International Documentary Festival

As the year winds down, it's time for local audiences to get a taste of the best of what's been happening in local and international cinema with a selection of more than 60 films offered by this year's Johannesburg Film Festival.

With so much to choose from and only six days to watch them, here's a taste of some of the feature films and documentaries on offer:

1. MY CULTURE MY MUSIC

Fanny Tsimong's documentary travels SA to find out how music has helped a wide variety of artists keep their traditions as a means of holding onto identities erased by brutal histories of colonialism and oppression while reinventing their sound for modern audiences.

Idris Elba makes his directorial debut with this bass-heavy period gangster drama set between 1970s Kingston and '80s Hackney. It's an evocative and personally inspired story that manages to evoke an all too under-represented subculture with all its violence, fashion and, of course, its glorious soundtrack.

WATCH | The trailer for 'Yardie'

Director Sophie Fiennes takes us behind the scenes of the life of one of pop culture's most intriguing larger-than-life characters - the one and only Grace Jones. It's a thoughtful and pleasantly meandering journey through the life of the singer in all her varied roles, from performer to mother and grandmother, that allows us to see her in a new light and paints her in a relatable palette of human contradictions and contrasts.

Julius Onah's film adaptation of the play by JC Lee asks difficult questions about the life of refugees living in adopted countries. Featuring a stellar ensemble that includes Naomi Watts, Tim Roth and Octavia Spencer, it's an atmospheric chamber piece that travels slowly but surely towards the difficult realisation that its characters must make about who they really are and how far they will go to maintain the façade of the reality they choose to believe.

5. WHERE ARE YOU, JOÃO GILBERTO?

Perhaps nobody did more to make Bossa Nova the soundtrack of the summer evenings of the 1950s and '60s than legendary Brazilian musician João Gilberto, who remained an elusive and reclusive figure for most of his life. He died this year. Director Georges Gachot takes a detective-thriller approach to his documentary, inspired by a book by German author Marc Fischer, in which various associates and experts attempt to track down Gilberto, who may or may not make his final appearance on camera.

WATCH | 'Where are you, João Gilberto?' trailer

When award-winning documentary filmmaker Rodney Evans discovers that he's losing his sight he decides to use this experience to investigate what it might mean to be a visually impaired artist. Beautifully shot and tenderly empathetic, this is a touching exploration of the world of the blind and their resilience in the face of what to many seems such an insurmountable obstacle to creative expression.

New Zealand comedy groundbreaker Taika Waititi stars in this irreverent, sometimes uncomfortable but enjoyably surreal take on the imaginary childhood friend genre. Waititi stars as Adolf Hitler, the mad imaginary friend of a young German boy in World War 2 whose life is thrown into turmoil when he discovers that his mother is hiding a Jewish girl in their attic.

James Mangold's epic drama of the true story of car designer Carroll Shelby (Matt Damon) and British driver Ken Miles (Christian Bale), who defied common sense and their corporate masters to design a car for the Ford Motor company to take on the mighty Enzo Ferrari at Le Mans in 1966. Full of fumes and plenty of burning rubber to keep petrolheads happy, it's also an engagingly dramatic story about two hot-headed men who manage to keep their eye on the prize in spite of their personality differences.

It's taken 37 years for this concert film of the late godmother of soul's brilliant gospel performance to reach the screen, but the resulting film is proof that good things come to those who wait and is a fitting tribute to one of Aretha Franklin's bestselling and best-loved albums and her gospel roots.

Director Jenna Bass provides an engaging and inventive contemporary feminist spin on the Western genre in this drama about a pair of South African women on the run from a female police officer in the harsh landscape of the Karoo. It's a timely and fascinating tale about what bands women together in an unforgiving and often physically and emotionally threatening environment.

An animated drama based on the book by legendary Polish reporter Ryszard Kapuscinski that melds fantasy and reality to create a gritty picture of Africa in the post-independence Cold War era.

WATCH | 'Another Day of Life' trailer

• The Johannesburg Film Festival takes place at venues across the city  from November 19 - 24. For more information, visit their website.

In 1972 Aretha Franklin took her huge talent back to where it all began - a Baptist church, with a choir - to record a remarkable set. Luckily for ...
Lifestyle
2 years ago

Five years ago, Johannesburg filmmaker Ulricho Grech-Cumbo had to learn about virtual reality in a hurry when a client commissioned a VR ...
Lifestyle
2 years ago