Not your usual sappy Santa story, the film showcases the importance of selflessness, generosity, friendship and overcoming differences 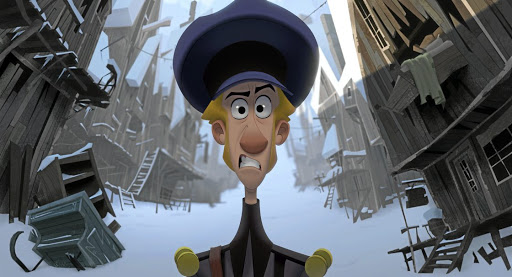 Spanish director Sergio Pablos has a long career in animation, where he's worked in various capacities on films such as Despicable Me, Rio and Small Foot. Now, thanks to Netflix, Pablos has brought his Christmas origins story, Klaus, to small screens around the globe ahead of the festive season.

As Pablos recalls, "I started working on the idea in 2010 and I looked around and saw there were a lot of origins stories being released and so I though it would be interesting to look for a fictional character whose mythology and legend could be updated, and I landed on Santa Claus."

Pablo wasn't interested in the traditional Christmas fare, a sappy story about Santa, but he was intrigued to discover through his research that while there are many different origin stories from various cultures, "there isn't one established origin myth for the story of Santa".

After pondering a variety of ways to make the story original and interesting, not only for himself but for audiences, Pablos hit upon the idea of making the world's most beloved annual present-delivery man and symbol of good cheer a secondary character in a story about the power of altruism.

'Tis the season to be jolly... or if you're really feeling lazy to curl up on the couch and watch a jolly-themed movie.
Lifestyle
2 years ago

Klaus is the story of a reluctant and rather useless postman named Jesper (voiced by Jason Schwartzman) who is banished to a small village in the Arctic circle after distinguishing himself as the worst student in the history of the postal academy. There he finds a town full of feuding locals who barely talk to each other and certainly seem to have no use for a postal service. Thanks to local schoolteacher Alva (Rashida Jones) Jesper hatches a plan to use the skills of the grouchy carpenter hermit Klaus (JK Simmons) to encourage a letter-writing-in-exchange-for-rewards programme that quickly transforms the town and the traditions of Christmas forever.

Pablos, who worked on a number of classic style 2-D animated features during his time at Disney, including Tarzan and The Hunchback of Notre Dame, decided to bring back that classic animation technique for his universal and charming tale. Thanks to new technologies and the backing of Netflix, Pablos and his large team were able "to ensure that the style retained its magic without having to sacrifice authenticity in aspects such as lighting and backgrounds".

After signing a production deal with Netflix in 2017, Pablos and his growing team of animators were able to utilise new technology to streamline the process while still retaining the charm of 2-D.

WATCH | The trailer for 'Klaus'

Pablos was also "blessed to get JK Simmons on board to play Klaus. The casting director had a list of names but when I saw his I said I wanted him and luckily enough when we approached him he agreed, so that was amazing and the rest of the cast fell into place from there."

Pablos hopes his film and its support from Netflix will allow for the platform to open up doors for original animated projects that don't fit the 3-D big-budget mode of much of the animated fare released through traditional distributors.

Mostly he hopes that "this will be a film that entertains audiences around the world and of all ages through a story that's about the importance of selflessness and generosity and the overcoming of differences".

This Christmas tell your children the real Santa Claus story

Behind today's mythical Santa Claus from the North Pole, is a real saint – St. Nicholas. How he came to be today's gift-giving jolly figure from the ...
Lifestyle
2 years ago

Once the turkey and trifle have been eaten this Christmas, many South African families will be sitting down to a game of Monopoly.
News
1 year ago
Next Article