Having kept her secret for 30 years, the former lead singer of Freshlyground is finally ready to unburden herself and share her story 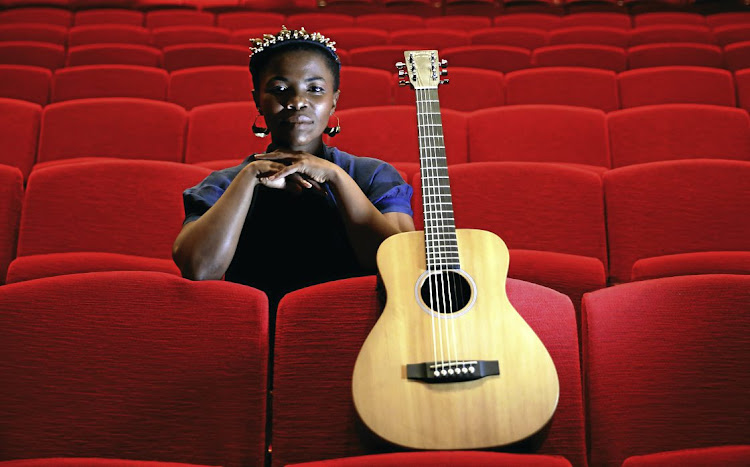 Zolani Mahola talks about of her one woman show entitled, 'The One Who Sings', at the Baxter Theatre, Cape Town.
Image: ESA ALEXANDER/SUNDAY TIMES

Purple eyeshadow is scattered across the dressing room counter at the Baxter Theatre where Zolani Mahola sits down to do her make up.

She has a secret to share, one she’s kept for 30 years. It’s only now, at the age of 38, that the former Freshlyground lead singer is ready to unburden herself and share her story.

She pauses deliberately, swivels in the chair, her hands covered in purple, and says: “I was sexually abused when I was eight.”

The moment is interrupted by a cleaner, who recognises her and begins singing It’s time for Africa, a line from the 2010 World Cup anthem. Around that time, while Mahola had reached the pinnacle of success, privately she was imploding.

When Mahola was six, her mother went into labour. There was excitement in the home. Her dad had just been promoted, the family had just moved from Kwazakhele in Port Elizabeth to New Brighton, a seemingly better township. But the excitement turned to tragedy when neither her mom nor the new baby returned from the hospital.

The lead singer of Freshly Ground, who's just announced she's going solo, tells us what's on her cultural radar
Lifestyle
2 years ago

By the time Mahola turned eight, her widowed dad had remarried and she found herself in the stereotypical stepmother narrative.

“That newness was intense. Then our father marries and at first it’s cool but then it becomes a very clichéd stepmother situation. It was not a very warm environment. It made me question myself a great deal … we started going to a multiracial Catholic school. Our two stepbrothers went to a government school so there was … resentment. I found myself in a situation where I was bullied at home,” Mahola says.

Then the sexual abuse, perpetrated by someone in her extended family circle, began, and continued for several years. It has taken her three decades to open up about it.

Two weeks ago, at her mother’s memorial in the Eastern Cape, she told her father and siblings for the first time. For years she felt that she couldn’t speak about it. It wasn’t until she’d reached rock bottom in 2013 that she decided to finally face her childhood demons.

The trauma of her childhood has resulted in gaps in her memory. What is clear is the moment she realised that what was happening to her was wrong. Mahola says she learnt from an early age how to escape from reality.

There weren’t many books in her home aside from the odd Dean Koontz and Stephen King novels, and the Bible. The preteen found herself drawn to the Bible, not for its religious message, but as a means to escape.

She was fascinated by the Old Testament and stories of a God who was to the point: “If you break his rules and laws you’re in hellfire and damnation.”

She was gripped by the Bible’s stories. “Some included stuff about incest. I was very small, so I didn’t understand ... but I started feeling like, ‘Oh my God, these things are happening, I’m going to go to hell.’ So, literally, the Word saved me.”

She was 11 years old when this realisation hit and she put a stop to the sexual abuse. The abuse may have stopped but the scars still linger. The first warning sign that all was not well came in 2010.

Mahola had conditioned herself to put up a façade because it wasn’t safe to share the hurt and tender part of herself with anybody. From a young age she learnt that food, television, books and later alcohol helped numb her pain.

In high school she discovered her gift and it led her towards the arts. She immersed herself in others’ stories, through acting, writing poetry and singing.

Years later her adolescent coping mechanisms would no longer help her in her adulthood.

Mahola had toxic relationships with men. There had always been a darkness around sex and she was angry, especially towards men. She’d find herself in one-sided affairs where her love was never reciprocated. The band’s 2004 hit song I’d Like, which she wrote, was about this feeling of longing for acceptance and validation, and an undying love for a boy who would never return her affection.

WATCH | The music video for Freshlyground's track 'I'd Like'

Still, there was no external evidence of the chaos brewing inside. It wasn’t until the 2010 World Cup that her internal pain began to show.

This was Mahola’s first warning that what was once an internal struggle was now an external problem. Her overeating and drinking were showing.

“This was before I had children, a big alarm bell started to sound there. I am short and I have a very delicate bone structure, but in 2010 I got to see myself and look at myself with the whole world and I was like, ‘No, do I look like that?’ It’s a crazy thing to feel like you’ve just behaved unconsciously to the point where it takes the World Cup for me to see what I looked like,” she says.

In 2013, when she was pregnant with her first son, the façade she’d spent nearly 30 years creating began to crack. At the height of her music career she felt unworthy and unloved.

“I’d been this public figure and I was very confident, but I was living with this underlying belief that I wasn’t worthy. First I had to admit that there was a problem, it wasn’t working.

“Then it was a willingness to sit with myself. That’s actually what I’d been running away from my whole life — from stopping and sitting down and feeling, instead of picking up my phone, putting on the TV, having that glass of wine, eating that meal, whatever thing to take me away from the moment,” she says.

She is still in the healing process, and this year has been a pivotal one. In August Mahola announced that she was going solo after 17 years of fronting the Afro-fusion band Freshlyground.

Accompanied only by a pulsating djembe drum and her guitar, she opened up about the death of her mother and how she went from knowing she was deeply loved and worthy to almost overnight feeling unloved and unworthy.

With a new body of work not quite suitable for the band, Freshlyground's Zolani Mahola is going it alone - with plans for motivational speaking and ...
Lifestyle
2 years ago

Now Mahola will take to the stage again, this time to share details of her sexual abuse.

In a one-woman play at the Baxter Theatre titled The One Who Sings she will take audiences on a personal journey against the backdrop of a changing South Africa .

I’m getting the story out in 2019, so that in 2020 it’s another new page and I go forward and people know this about me and it’s fine

"Then they can tell the next person that this thing happened to me but I survived it and you can too,” she says.

Years of therapy, 12-step programmes and deep introspection don’t mean she’s got it all figured out. Mahola still has bad days, when she lies in bed with a bag of chips, watching a TV series, to escape reality. The difference now is that she is conscious about what she’s doing.

Quoting the 13th-century Persian poet Rumi, she says: “The wound is the place where the light enters you.” Then, in her own words: “If there’s one thing that I’d like to get out of this play, and me sharing my wounds, is for it not to take the next girl or boy 30 years to say: ‘I was hurt in this way and it wasn’t my fault.’ To be able to say ‘I am loveable, I am worthy’, without feeling shame.”

She takes out her phone to read another quote, by Maya Angelou, the late American poet, civil rights activist and singer.

“There is no greater agony than bearing an untold story inside you.”

• 'The One Who Sings' is on at the Baxter Theatre in Cape Town until November 23. Tickets are R120 from Webtickets.

When women called in to her radio show to describe how they were hurt, bruised and battered in poisoned relationships, veteran journalist Iman ...
Lifestyle
2 years ago

LootLove sends love to women who've spoken out against abuse: We learn from your pain