Battle of the sporty convertibles: we test 3 of the best

We pit the Ford Mustang 2.3-litre EcoBoost , Mercedes-Benz C300 and Audi A5 TFSI Quattro against each other

The prospect of roofless motoring inspires all manner of idyllic notions. Wind lovingly tousling the hair and stimulating the facial pores. Smooth sounds of Jimmy Dludlu through the speakers. Gentle sunshine rays absorbed by the skin on their journey to becoming nourishing pockets of vitamin D. Indeed, manufacturers know that the (relatively) simple task of chopping the ceiling off a car that began life as coupe could open a new realm of possibilities for enthusiasts who relish al fresco driving.

Forget the trade-offs in structural rigidity for a second - easy cruising is what the category under examination is all about. We are zoning-in on the medium-sized cabriolet genre, offering accommodation for a quartet and their luggage (if they pack sensibly).

The number four appears to be a theme here, with our contenders packing engines with the same number of cylinders. In attendance are three of the foremost players in the ambit: the Ford Mustang 2.3-litre EcoBoost, Mercedes-Benz C300 and Audi A5 TFSI Quattro. One is rather conspicuous by its absence: the topless version of the BMW 4-Series. Attempts were made in vain to procure a unit.

Once upon a time there were others on the field. Lexus had the IS 250C, famously hated by my colleague, Thomas Falkiner. Fellow Japanese luxury brand Infiniti, now dormant in SA, sold the G35. And Volvo used to have the C70. Alas, times and fashions have changed - consider these remaining choices stalwarts of a waning niche.

Technically, the Ford Mustang is the newest of the lot, with our market having received the enhanced iteration of the model in July. But it feels the oldest.

The interior, while a slight improvement on the one before, remains downright low rent with its mix of hard plastics and cheap-feeling switchgear. Its infotainment system, the Ford SYNC3 system, while once at the frontline of innovation, is now outmoded.

But all these valid criticisms are eclipsed by the depth of charisma and mystique innate to the galloping horse insignia. Oh yes, everybody wants a Mustang - those wistful stares and chipper comments from admirers are a constant reminder. Once unclasped via a rather labour-intensive pull-and-twist handle, the fabric top is shed electronically. 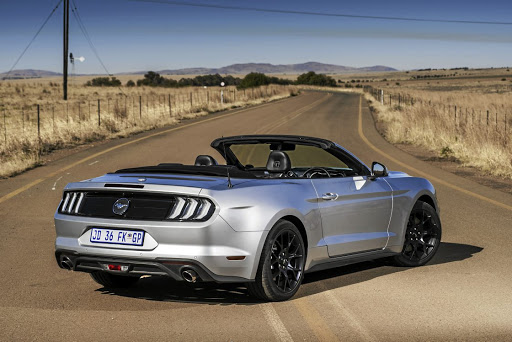 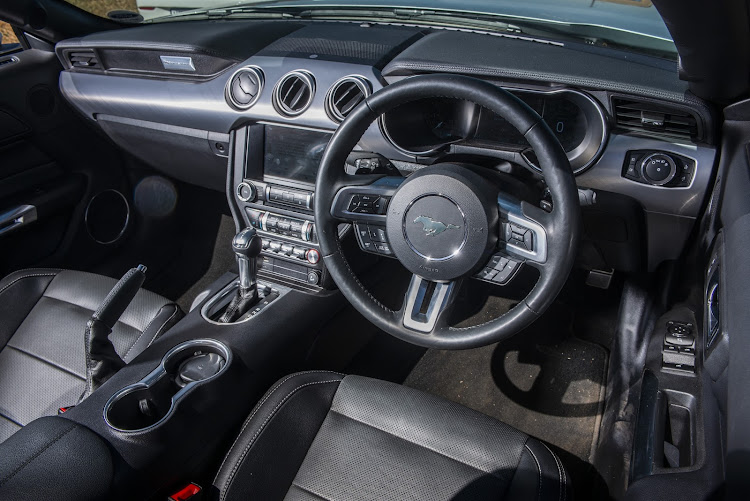 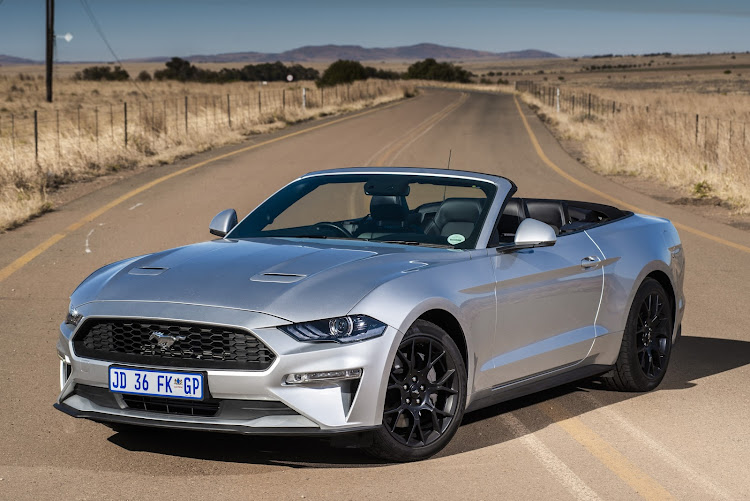 Mild sweeps and straight freeways are most flattering to the Mustang. Forget dynamic competencies: this pony is as poised and rigid as overcooked tagliatelle. You could probably tackle a mountain pass with more composure on actual horseback.

It is the most powerful here, with ample kick (213kW and 441Nm) courtesy of a 2261cc, boosted engine paired with a 10-speed automatic. And even if the acoustics are expectedly demure, the propensity to deliver big, smoky burnouts is very much an endearing feature.

The C300 cabriolet dripped glamour and pizzazz with its so-called diamond-grille option, bodywork jewelleries and swanky turbine alloys. And yet, the consensus was that despite this persona of volume-turned-up extravagance, it still managed to project a sense of purity. Perhaps the metallic white paint helped give it this sense of cleanliness, like a newly christened baby outfitted in fresh, frilly garb.

But what really took us aback was the athleticism and focus with which it went about its business. Its turbocharged 1991cc engine is good for 190kW and 370Nm, shifted through a nine-speed automatic to the rear wheels. Acceleration was dispatched with more vigour than expected. And the overall tautness of the package, following those necessary reinforcements, appeared to give it a near kinship with its fixed-head counterpart. 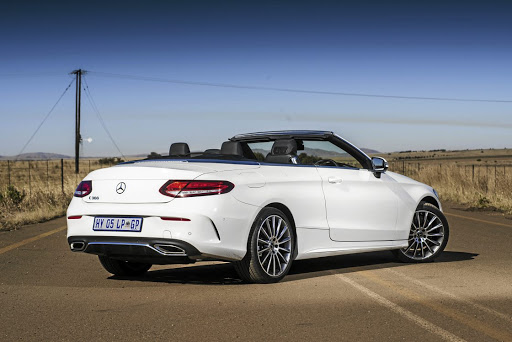 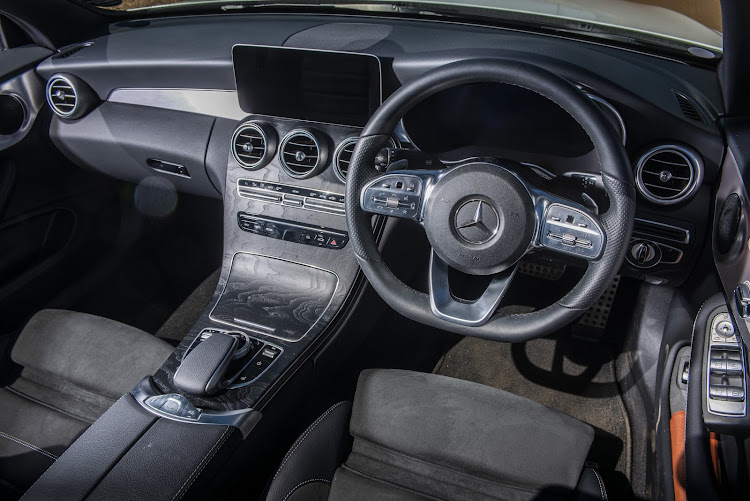 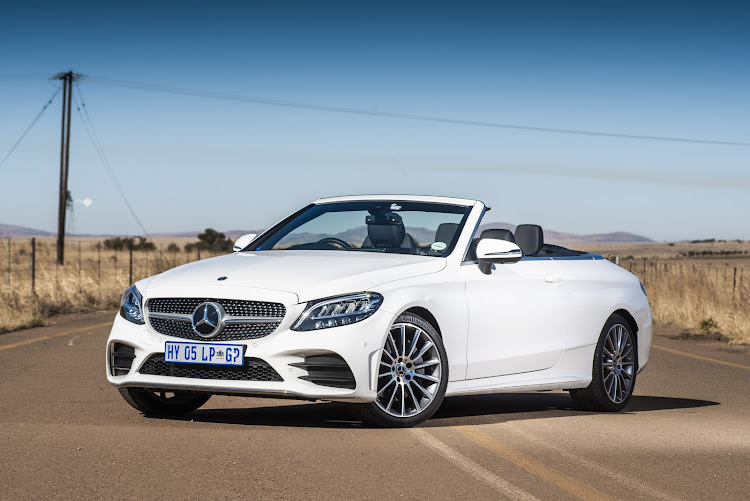 Great steering too, with a sharpness and feedback that had us relishing our countryside sojourn with serious enthusiasm.

As mirrored by the exterior, the cabin is appropriately plush, equipped with appointments that set it apart from an Avis-specification C-Class sedan. That includes the enticing air-scarf that channels warmth down a frigid neck. Handy for those stints at night or while powering through a temperamental Cape gale.

It seems to have the best wind protection too, with a deflector at the top of the windscreen frame that extends and retracts at the touch of a button.

Drawbacks? Well, it is the most expensive specimen here, with a base asking price of R940,799.

Where the competitor from Stuttgart comes in bejewelled and ready to inveigle, the folks from Ingolstadt take a subtler approach. In typical Audi fashion, the A5 cabriolet is a conservative piece of design.

Which is an observation rather than a criticism, because when you look closely, there are more than a few elements that would delight a self-styled connoisseur of automotive art. Note the assertive prow, the fine pleats on the hood and the "tornado" line running across the side.

Walter de Silva, who drew the 2007 original A5, notably said that it was the most beautiful car he had ever penned. Conceiving this follow-up would have been like trying to improve the Mona Lisa. 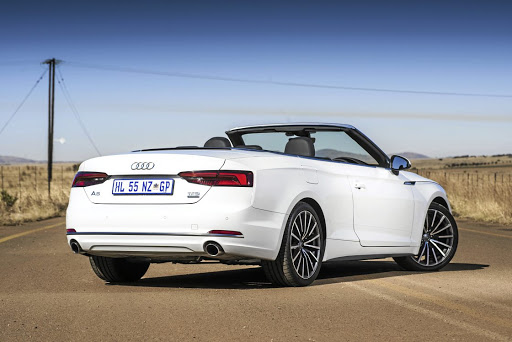 But it seems they have. Whether top up or down, the A5 is a fine thing indeed. Goes well too, with a texture erring more on the cosseting, tourer side of life rather than the sportiness so convincingly imbued in the Mercedes-Benz. But this could also be attributed to the basic specification of the unit supplied for our test. Plump tyre sidewalls made it supremely comfortable.

All-wheel drive ensured that the 185kW and 370Nm from its boosted 1984cc engine was transmitted dutifully in all conditions. No faults could be levelled at the seven-speed, dual-clutch automatic transmission on duty. And hands down, it has the best-quality interior here.

The Mustang is on many most-wanted lists for its personality and the allure held by such a powerful heritage.

The Mercedes-Benz stands out as the glamour leader of the pack, with the tangible prestigiousness to the overall experience - in addition to that unexpected dollop of dynamic we noted.

The Audi, meanwhile, is a wallflower at first glance. Its subtlety is underpinned by exceptional refinement in cruising capability as well as an interior of remarkable tactile quality.

This is obviously a tough conundrum. Is a conclusive winner even necessary in the evaluation of such a category? Whatever you decide, wear sunscreen.

FIRST DRIVE | The 2019 BMW M8 is one fiery driving package

When the Chevrolet Corvette Stingray debuted in the 1950s, it was only available as a convertible. Since then, the drop-top C8s have been exclusively ...
Motoring
9 months ago
Next Article