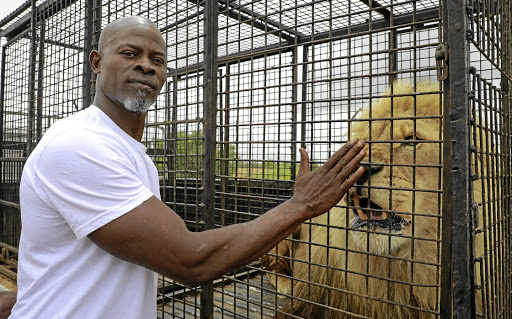 Actor Djimon Hounsou and his co-star Vayetse, who feature in a campaign on wildlife protection.
Image: Sebabatso Mosamo

But Djimon Hounsou's most recent role was by far the most nerve-racking: his co-star was a 200kg lion named Vayetse.

Hounsou, 55, was in SA to film a campaign about the plight of Africa's lions, whose population is estimated to have dwindled to 20,000 in the wild.

Lions are now being killed by poachers for their skeletons, a substitute for sought-after tiger bones in Asia.

"Lions play a significant role in balancing our natural world," Hounsou said. "It is imperative that we make sure that we don't extinguish our African animal heritage. They are on the brink of extinction. It is our inherent obligation to make sure that the lions are free and preserved for generations to come."

Hounsou was in SA as part of WildAid's project to stop illegal wildlife trade. The San Francisco-based environmental organisation believes that suppressing the demand for wildlife products, among them ivory, rhino horn and shark-fin soup, would support conservation.

And rather than preaching or using scare tactics, WildAid uses celebrities to convey its message: when the buying stops, the killing can too.

On set at the Kevin Richardson Wildlife Sanctuary in Cullinan near Pretoria, Hounsou looked the picture of a calm Hollywood action man as he waited in a black metal cage for his cue to appear with Vayetse.

The sanctuary belongs to Richardson, the "lion whisperer" who has attracted a global YouTube audience enthralled by his bonding with lions named Meg, Amy and Bobcat. He is regularly seen taking the lions on walks in online videos.

"I didn't realise it was Kevin that we were coming to see this morning," said Hounsou. "I thought: I know this face, wow, we are in the right place to be looking at and reporting on the lions."

In the scene being shot, which will form part of the WildAid campaign highlighting the plight of the lions and will be released next year, he was expected to say the line, "Because poaching steals from us all."

All the while, out of his line of sight, Vayetse looms behind his shoulder, with Richardson, who is armed with only a stick upon which he puts a chunk of meat to lure the lion, just out of camera shot.

With no fancy Hollywood CGI tricks employed, nerves of steel are needed as the lion comes within a ruler's length of the actor

With no fancy Hollywood CGI tricks employed, nerves of steel are needed as the lion comes within a ruler's length of the actor.

However, Hounsou puts his acting skill to good use, delivering the line before quickly escaping into the safety of the metal cage.

The actor said he felt comfortable placing his trust in Richardson for his safety. And rather than feeling threatened, he was in awe of the powerfully built cat.

"I kept thinking how clearly insignificant we really are in front of such a beautiful creature," said Hounsou.

'Sex and the City' star Kristin Davis spent time cosying up to elephants at a five-star safari lodge in Limpopo before filming began of the Netflix ...
Lifestyle
2 years ago

A video of a tourist getting out of his car to get closer to a pride of lions in the Kruger National Park has gone viral.
Lifestyle
2 years ago