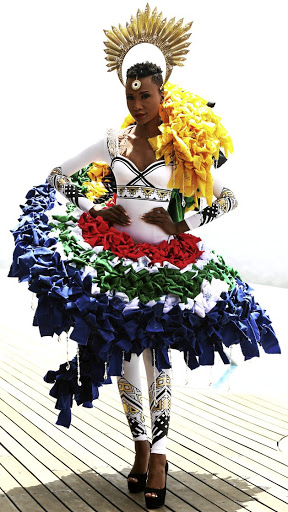 Before Miss SA struts her stuff at the Miss Universe pageant, she will have to assemble her four-piece national costume — with the help of a screwdriver and a how-to video.

In November, Zozibini Tunzi asked men to write love letters on ribbons to the women of SA as part of a UN campaign and her ongoing work against gender-based violence.

In support of her #HeForShe campaign, more than 2,000 of the ribbons have been woven into a bold Wave of Love costume for the Miss Universe gala event on December 5 in Atlanta, US, which precedes the pageant on December 8.

Miss SA creative director Werner Wessels said 93 contestants from all over the world will be wearing creations that represent their countries.

Tunzi said when she was asked on the night of the Miss SA finale what reason women had to keep smiling, she answered: "They don't have a reason to smile, because they are dying every day because of [gender-based violence]."

That was a genuine answer, she said, and she knew she had to do much more. "We have a long way to go before we bridge the gap between men and women, and gender-based violence is a social issue more than a societal issue.

"Perhaps this is the beginning of rewriting our narrative of violence towards women."

But, for the petite beauty, wearing the sizable creation will require a few favours from backstage helpers.

The ribbons are attached to 50m of recycled fabric, with about 40m of spring steel reinforcing the 10kg dress. Then the 1.5kg crown must be added.

"Zozi's body suit is corseted and incorporates traditional Xhosa, Zulu and Ndebele prints. It is simple and strong and keeps the focus on the ribbons," said Kandlin.

He said he was prepared for people to have mixed reactions to the design.

"Last year Miss Vietnam came dressed as a basket of bread. People shouldn't knock the outfit if they don't understand the context," he said.

"Last year I was woken up in Germany by a phone call where I was accused of making Tamaryn look like a rotisserie chicken," he laughed.

SNAPS | Zozibini Tunzi jets off to Miss Universe: I wish my gran was alive to see me now

Miss SA has revealed her National costume to be worn at the Miss Universe pageant on December 9.
Lifestyle
2 years ago