Acclaimed performance artist Steven Cohen has discovered a unique way of pinning down the transitory nature of his works, which he shares in a new Joburg exhibition 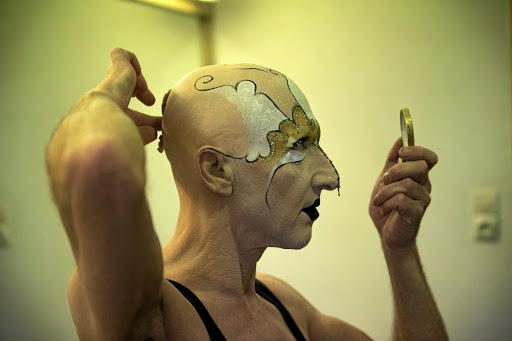 Steven Cohen applies the elaborate makeup he uses for his performance art. Afterwards, he will apply archival tape to his face to lift off a ‘print’ of it. The tapes have been reassembled to create works of their own.
Image: Pierre Planchenault

Performance artist Steven Cohen calls There's glitter in my soup!, his latest exhibition of new works, "almost a non-show". He's presented a series of artworks made from the residues of performances - strange images he creates by removing his make-up with strips of archival tape, and then reassembling the "face" he's stripped off to reconstitute a kind of inside-out self-portrait.

Johannesburg-born Cohen, who now lives in Lille, France, often stages his performances or interventions in public spaces, or sometimes in galleries and at art festivals. Broadly speaking, throughout his three-decade career (Cohen is 57 now), his work has dealt with themes relating to his body and identity as homosexual and Jewish, and he is not afraid of the radical, provocative and even the obscene.

His performances have seen him tottering through a squatter camp in towering heels dressed in a corset and chandelier, arrested for tethering a rooster to his penis and parading in front of the Eiffel Tower in Paris, drinking his own effluent, bathing in blood and ingesting the ashes of his beloved collaborator and life partner, choreographer Elu Kieser.

For his performances, Cohen goes to great lengths to create detailed and beautifully made costumes and elaborate makeup. 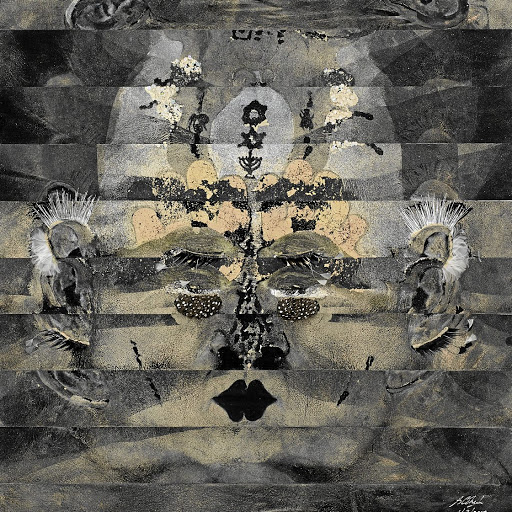 "I make for perfection," he says. "Theatre people often say to me, you're wasting your time because we don't see [the details]. But I'm more interested in what we feel than what we see, and I feel it .... It's part of the completion of the creation of a work for me."

His makeup often includes delicate butterflies' wings, glitter, tassels, Bedazzles and feathers. Making himself up is painstaking and laborious.

Perhaps one of the aspects of his work he battles with most, however, is its ephemeral nature. He once compared his intervention to burning paintings, and talks about art that "evaporates" or "vanishes in the moment".

"To me, the residue of performance is as critical as the ephemerality of performance," he says. "I want both. I want it to be instant, to disappear and consume itself. At the same time, I want it to last forever." This is the contradiction that charges these mask-like works.

Cohen says he first discovered his technique for removing makeup a decade ago at a dinner held at an art museum. It was after one of his performances and Cohen was in full regalia. Another guest, across the table from him, announced accusingly: "There's glitter in my soup!" (Hence the title of this exhibition.)

"It was kind of humiliating," says Cohen. "It was a chic dinner and it was a rebuke." He had a roll of tape with him - "It's a tradition in theatre to steal the dance-mat tape," he says - and there and then he used it to strip off his makeup, glitter and all. This makeup-removal technique worked so well, especially for removing glitter - "F*cking glitter gets everywhere, so I do it this way always," he says - that he began using it regularly. In the process, he also discovered that he could reconstitute the "tape faces" as he calls them, and would occasionally post images of them on social media, although he says he never saw their potential as art objects.

It wasn't until Lerato Bereng, an associate director at Stevenson, Cohen's gallery in SA, suggested that he formalise the idea and use proper archival tape that he considered their meaning more carefully.

"I think the power of them is what you can't see," he says. "It's the back of the makeup. The glitter is under the base now. It's all reversed." 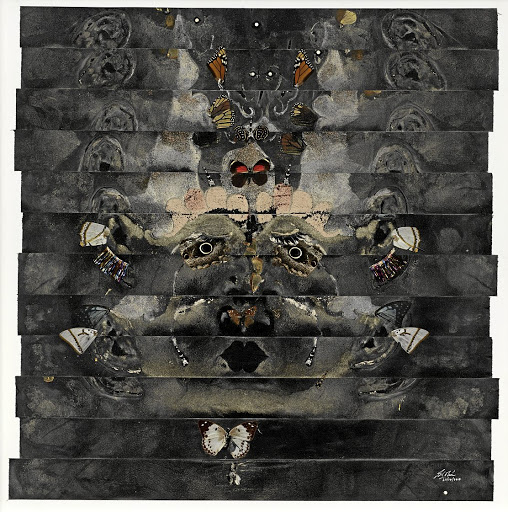 Steven Cohen's latest works are made from the residues of performances.
Image: Courtesy Stevenson Gallery

They represent a separation between artist and artwork. "I'm as surprised as anyone to see myself from the outside in," he says. "I have difficultly recognising myself in that."

This alienation from himself in performance opens up a gap between art and life that Cohen believes is essential to any artwork.

"As difficult as my performances are ... it's the moments between [when it is] difficult to live with myself," he says. "In the doing, everything is easy. I'm sure when you murder someone it's easy, and how do you live with yourself afterwards? Art is similar." 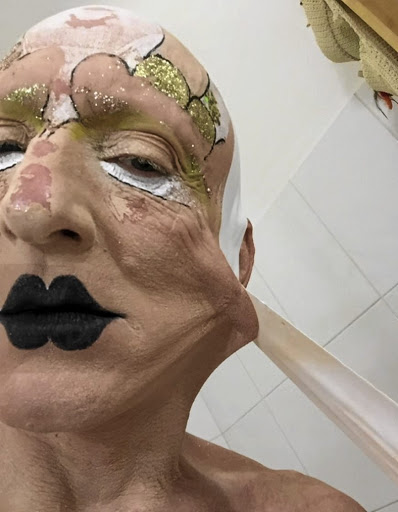 Steven Cohen's cellphone selfie of the process by which he creates his 'tape-faces'.
Image: Supplied

For the rest of us, when you stand in front of these works, they seem like an invitation to inhabit his position - to slip behind his face and experience a performance from his perspective. They evoke a strong sense of what Cohen calls "being-looked-at-ness".

This strange quality, Cohen muses, is for him the very essence of art - not the art object or the performance, not the viewer, but "the thing between".

"It's about what happens when we look at something," he says. "That's how I try to understand the value of looking at things." Not art for art's sake, but the transformative effect art has - its potential for changing consciousness. "It's always been for me about what the performance produces," he says.

Cohen's tape-faces have come to represent the impossibility of knowing exactly what it is that art produces, and at the same time conjure quite a tangible sense of the thing that happens between an artwork and a viewer.

The mysterious magnetism they have is not so much in the memory of a performance they embody so much as the way in which they bend the viewer's perspective around to the performer's point of view and in the process evoke an awareness of the space between the artwork or performance and the viewer in which artworks have their power.

When he calls this exhibition a "non-show", Cohen qualifies it by saying, "It's more of a showing." Despite their delicate, butterfly-like beauty and unsettling distortions, the real power of the tape-faces is in the way they open a gap in which we become aware of the transformative potential of looking and being looked at: the zone between, in which art becomes life.

• 'There's glitter in my soup!' is at Stevenson Johannesburg concurrently with an exhibition by Nelly Guambe until January 24. The gallery will be closed from December 13 until January 6.

A LOOK BACK AT COHEN'S OUTRAGEOUS CAREER

LIVING ART (1998) Cohen's performance debut, dressed as the very earliest incarnation of the "Ugly Girl" character he developed, flirted with Afrikaner homophobia during rugby matches and similarly charged masculine events. In related performances, such as Patriotic Drag in 1998, he attended an AWB rally at Fort Klapperkop commemorating the Great Trek.

TASTE (1999) In possibly still one of Cohen's most shocking and controversial performances, he "drinks his own douche", which he expelled into a Victorian bedpan during a performance to the soundtrack of To life (to life, l'chaim) from Fiddler on the Roof.

CHANDELIER (2001) Cohen, dressed in impossibly high heels and a corset rigged up with a chandelier to make a kind of tutu, tottered around a squatter camp under the M1 highway during a forced eviction. 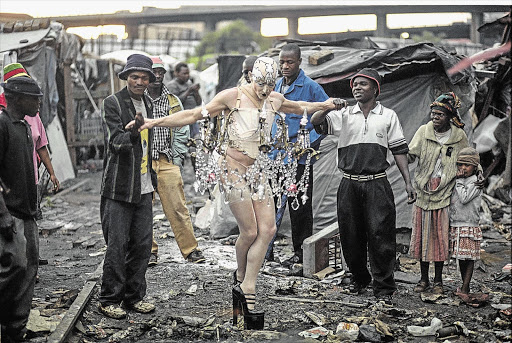 GOLGOTHA (2005) Wearing high heels made of real human skulls (found in a trendy décor store in New York's SoHo), this made-for-video performance shows Cohen walking through the streets of New York in a searing exploration of consumerism, mortality and grief after his brother's death by suicide.

COQ/COCK (2013) Cohen tied a live rooster to his penis and paraded, mimicking the movement of a chicken, in front of the Eiffel Tower dressed in a feather headdress. He was arrested and convicted for sexual exhibitionism.

ELU'S ASHES (2017) After the untimely death of Cohen's life partner and collaborator, choreographer Elu Kieser, during a performance Cohen ate some of Elu's ashes in an act of provocation and ritual mourning.

Baba Tjeko, whose work formed part of the inaugural arteBOTANICA event at the Nirox sculpture park in Krugersdorp last weekend, began his career as ...
Lifestyle
1 year ago

Ennock Mlangeni is preparing for his first-ever international exhibition.
Lifestyle
1 year ago

Indebted or in denial? A candid look at what it means to be white in SA today

Photographer Sydelle Willow Smith’s five-year-long project sets out to unsettle whiteness and its easy assumptions about how the world works, or ...
Lifestyle
1 year ago