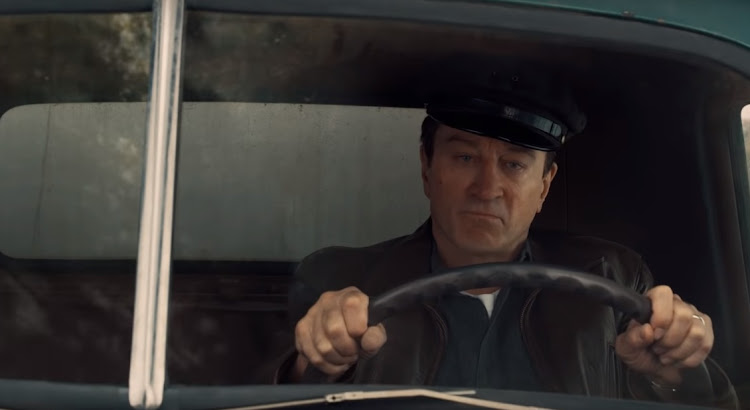 Thanks to new technology, Robert De Niro, 76, was able to look far younger on screen, as can be seen in this still from 'The Irishman'.
Image: Netflix/YouTube

Entering the darkened suite on the 53rd floor of the Conrad Hotel in New York and seeing Robert de Niro in a pool of television spotlights makes my brain pop a bit. He. Is. A. Legend of Hollywood. Also, he famously doesn't suffer fools, so I'm nervous when I shake his large hand and he reminds me that we've met before.

De Niro's face has appeared on our screens a hundred times, most recently in The Joker. He's one of the great actors of our generation and has always had a special relationship with director Martin Scorsese, one that's produced some classic films, like Raging Bull, Goodfellas and Mean Streets.

In their latest collaboration, The Irishman, Scorsese includes other favourite cast members: Joe Pesci (as crime boss Russell Bufalino) and Al Pacino (as Jimmy Hoffa). De Niro plays Frank Sheeran, a hustler who becomes a hitman for two "godfathers" - a crime boss and a Teamster. The choices he must make when the men's goals diverge are difficult. It's a film about compromise, loss, choices and the price we pay for the decisions we make.

WATCH | The trailer for 'The Irishman'

Scorsese uses digital enhancement to make his lead actors look young. De Niro says: "Originally, younger actors were going to portray the characters in their youth, but when Netflix came on, Marty pulled in Pablo Helman of ILM [Industrial Light & Magic]. We did tests and it was determined that using that technique [to make us digitally younger], we could be in our roles for the entire film." He pauses, then adds: "I joked that the technology added 30 years to my career."

De Niro, 76 years old, says he was delighted to have worked with Netflix. "We were lucky to have their backing. There were lots of scenes, a lot of changes, a lot of different time periods. We had the luxury of making the movie in a comfortable way. We had to keep moving, with a lot to cover, but, in the end, I was very happy with it."

Some critics have questioned the feasibility of some of the story arcs, a prompt that might rankle other big stars. Bob, as he is known, curves his mouth downward into the well-known grimace.

"I don't know if this is the actual story, exactly as it happened. As far as we were concerned, it was a story but a very plausible one . until there's a better explanation. Marty wanted to make a film with Joe and myself and Al - here it is. There's a good chance that it's true. A lot of it felt right to me."

De Niro is also an entrepreneur who loves to take his six kids to one of his 39 famous Japanese/Peruvian restaurants, Nobu (he also has eight luxury hotels). He says he recently tried Wagyu beef. "You can only have so much of it, it's rich, but great," he adds on a personal note before getting back to the film.

"Al and I have known each other since we were in our 20s," says De Niro. The two socialise. "As our situations changed, we could talk about stuff that's hard to talk about with other people."

You feel like you are on a tightrope, but that Marty is the net beneath you, which means you're always safe

No conversation with De Niro would be complete without exploring his relationship with Scorsese. "We've had a long and fortunate history working together, I've been lucky," he says. "The experience with Marty is as important as the results because that process, whatever it is, will result in something special that's respected. It will be unique. You feel like you are on a tightrope, but that Marty is the net beneath you, which means you're always safe."

I ask him, is there any chance he'll retire soon? Laughter fills his puppy-dog eyes. "What else am I going to do?" he asks. "It depends on what retiring means - slowing down in some ways? You're physically forced to do that. I like to keep going, keep busy, yet at times, you have to slow down just so you can focus on something properly that needs time. I'd like to think that I'll always be at my peak, until the end. I don't think of myself as the kind of character who would crawl away and die - but that might be one of my best scenes."

•'The Irishman' is available on Netflix.

Why 'The Irishman' is the most highly-anticipated flick of 2019

Directed by Martin Scorsese and starring Robert De Niro and Al Pacino, this mob movie is Netflix's most ambitious project yet
Lifestyle
2 years ago

Whether you have 3-hours or 10, these are the series and movies to add to your playlist
Lifestyle
1 year ago