Roger Ballen's eerie photos as you've never seen them before: in colour

After 50 years of shooting in black and white, the influential photographer has embraced colour in his work - and somehow this makes his distinctive images even more unsettling 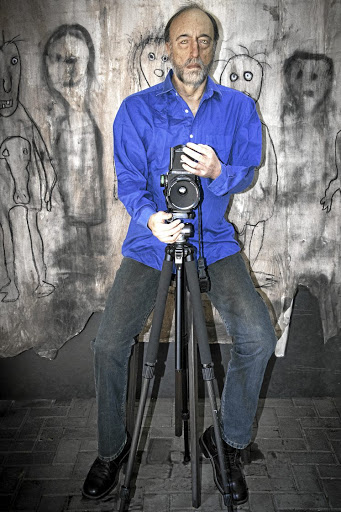 These days, if you manage to catch Roger Ballen in Joburg, he's likely to be returning from something in one country and preparing to leave for another.

When I visit him in Parktown, he's returned from the opening of his new show, The World According to Roger Ballen, and the launch of its accompanying book, at the Musée de la Halle Saint Pierre in Paris. He's about to return there before heading off to the opening of another show in Brussels.

Ballen jokes: "I'm one of South African Airways' better customers. I hope they don't go under because all that work will have been for nothing."

The Halle Saint Pierre is devoted to the showing of works of art brut or outsider art, popularised by the artist Jean Dubuffet who, in the wake of the world wars that decimated Europe, was suspicious of the establishment.

Art historian Colin Rhodes writes in The World According to Roger Ballen that "compliance with social dictates dims and extinguishes creative powers, so the only people who produce artworks in anything approaching a pure form are likely to be found in places situated outside, or in the margins of, the dominant culture".

Dubuffet found his examples of art brut in the productions of people with no artistic training, living on the periphery of society or excluded from it altogether, such as the inmates of psychiatric hospitals, spiritualists and mediums.

IN WITH THE OUTSIDERS

To those familiar with Ballen's work, the links between Dubuffet's search for outsiders and artistic expressions that were freer and less constrained by convention might seem obvious, but, as he's quick to remind me, "I'm not an outsider artist — I've got two PhDs and I'm not somebody who doesn't know about art. 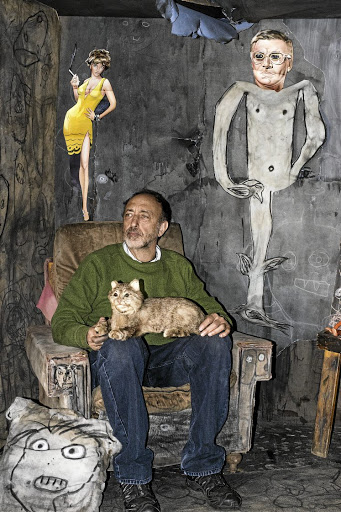 "If you look at the drawings in the photographs from the last 15 or 20 years you could say that they could have come from a Dubuffet painting or from some other art brut exhibitions. So there's a link in to the places that I work in, places of outsiders — not necessarily outsider artists but outsiders — and the type of drawing and painting that goes into the work."

The show consists of a downstairs presentation of 10 installation works and videos and an upstairs space devoted to a selection of Ballen's work divided into categories - "drawing, people, animals, real/unreal and apparitions".

There are images that will be familiar to viewers of Ballen's prolific output over the past two decades, but the show and the book include a significant number of colour pictures and pictures of Ballen at work, taken by his long-time assistant Marguerite Rossouw.

He describes the transition to digital colour as: "An easy transition but a major one."

The colour photographs are easily recognisable as Ballen creations with their absurdist juxtapositions of eerie objects, outsider characters and primitive drawings, but colour adds a quality that makes them more unsettling.

Black and white is more abstract - it's not the way we see. Colour softens the meaning of the picture. People can identify more easily with a colour world

As Ballen sees it, "There's something subtly different with colour but it depends on how you use it. Black and white is more abstract - it's not the way we see. Colour softens the meaning of the picture. People can identify more easily with a colour world. 99.9% of the pictures we see are in colour."

As to the pictures of the artist in situ or in poses that recreate some of his previous photos with Ballen inserted into the scenes, he says their inclusion is important because there's a side of what he does that people don't know much about.

Ballen has managed to successfully survive exclusively off his practice for the past decade and no longer has to rely on the work as a geologist that first brought him to SA from his native US, but he advises younger artists to be aware of the difficulty of being a South African artist: "It's a difficult environment. The collector and most of the market is outside of the country."

He adds, with a sly laugh, "It's not like everybody wants to buy a piece of art - it's not like my son Paul's homemade ice cream. I said to him, 'I wish I could sell art like you sell ice cream.' "

Though Ballen first made his name taking photographs of SA's rundown remote towns and the residents of the platteland, he has no desire to return to these places for further exploration.

"I wasn't necessarily interested in apartheid and the problem of white people in apartheid. That's not what motivated me. Journalists wrote about 'Roger Ballen's depiction of poor whites', but that wasn't what I was doing the work for. It's always been in my subconscious to find something about the human condition that people subconsciously relate to." 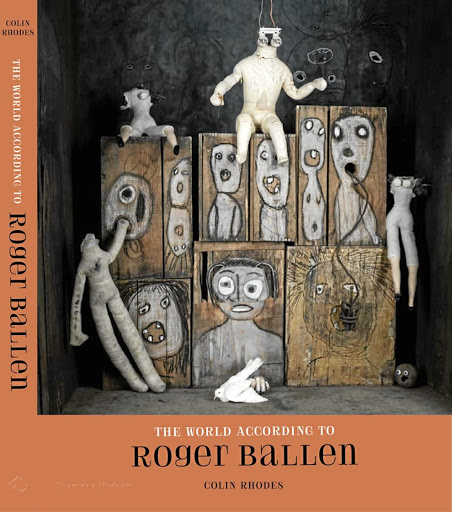 'The World According to Roger Ballen' is published by Thames & Hudson, R940.
Image: Supplied

As he approaches 70, Ballen has been thinking about his legacy. He has a foundation and a wing at the Zeitz Mocaa in Cape Town, but he's been feeling recently that he needs to find a place that will be a centre for him and for people interested his pictures - "a place to discuss what photography's about and to help expand people's notion of photography as an important aesthetic".

His centre, which he's building from the ground up at a site in Forest Town opposite the Holocaust centre, will be one of the first of its kind in Africa. Ballen says he hopes that when it opens next year it will make a contribution to the understanding of the aesthetics of photography. "I'd like the centre to be focused on African photography. I hope it contributes to that," he says.

One wonders when Ballen finds the time to make new work with all his travelling, but he says he's disciplined, organised and focussed. "I do my work while I'm here," he says. "It's a balancing act. I've being doing this for over 50 years. I know how to get good pictures. Some weeks are good and some are bad but I'm like a robot with this sort of stuff."

• 'The World According to Roger Ballen' is on at the Musée de la Halle Saint Pierre in Paris until July 2020. The book of the same name is published by Thames & Hudson, R940.

Famed photographer Roger Ballen, who has been producing dark portraits of his adoptive country for 36 years, has been honoured by Cape Town's newest ...
Lifestyle
3 years ago

Acclaimed performance artist Steven Cohen has discovered a unique way of pinning down the transitory nature of his works, which he shares in a new ...
Lifestyle
1 year ago

Photographic artist Roger Ballen has donated all of his published work to the Zeitz Museum of Contemporary Art Africa in Cape Town.
TshisaLIVE
3 years ago