Jodie Turner-Smith and Daniel Kaluuya star as an ill-fated couple whose first date turns into a nightmare flight from the law in 'Queen & Slim'.
Image: Supplied

Glibly described by many critics as a Bonnie and Clyde for the Black Lives Matter era, Queen & Slim stars Get Out star Daniel Kaluuya and newcomer Jodie Turner-Smith. They play a couple whose misguided Tinder date turns into a nightmare that sees them shoot a policeman in self-defence and embark on a whirlwind journey across the US. In their plight they become unwilling fugitives from the law and increasingly comfortable, if initially strange, bedfellows.

Part road-trip movie, part outlaws on the run film and part romantic drama, Queen & Slim is far more than a simple re-imagining of classic American cinema genres reflected through the lens of black characters. Rather, it's a unique, often bitterly funny and ultimately powerful examination of the lived realities of black people in Trump's America. It shifts easily in tone and genre styles while never losing sight of the fact that by simply putting the lives of its subjects on screen with an empathetic tone and a heartfelt ear for their lives, it is a deeply political piece of fresh and invigorating work.

It's creators, writer Lena Waithe and director Melina Matsoukas are, in their own ways, a pair of anti-establishment cinema outlaws who have cleverly used their power within an industry that's waking up to the need for the honest representation of black life to their advantage.

Waithe is an Emmy Award-winning writer and star of comedy smash hit Master of None and Matsoukas has a long and distinguished career as a ground-breaking Grammy-winning director of music videos for some of the biggest stars of the age, including Rihanna and Beyoncé. The story for what has become their debut feature film was brought to Waithe by everyone's favourite disgraced memoirist and novelist, James Frey (A Million Little Pieces).

Speaking by phone from London, Waithe describes how she went about taking the idea of a black outlaw road-trip couple and expanding it into a multi-genre, real-life centred film.

WATCH | The trailer for 'Queen & Slim'

Matsoukas, who had been looking around for a script to become her debut directorial project, says when Waithe gave her the script for Queen & Slim it was everything she wanted in a film.

"It was political, it had something to say, it felt necessary and it was also just a beautiful and entertaining love story. That's the best version of art - when you can have a strong perspective and a strong voice but also create something that's enjoyable to watch. It felt like something I had to do."

When it came to her approach to visualising what Waithe had put down on the page, Matsoukas says she was attracted to the story because it really defies all traditions and conventions and genres and navigates between being a romcom that suddenly shifts into a horror film and then becomes a beautiful love story that's wrapped up in humour and also tragedy and hope at the same time.

This kykNET film is bursting with minor details that add nuance to its depiction of an ultimately familiar tale of our country's painful past, writes ...
Lifestyle
1 year ago

"I feel like it's a reflection of how we walk through life," she said, adding that she loved that you couldn't put it in one box even if you wanted to. "It felt courageous in that way and so I tried to mimic that and parallel that visually as well. Sometimes I made choices that felt fantastical in order to show what it feels like to be in love and caught in somewhat of a dream.

"Sometimes it's deeply rooted in reality and sometimes it feels like a documentary. Their encounter with the police is deeply rooted in authenticity. I tried to mimic what Lena set out in the foundation of the script and so we were able to navigate through all these different genres and we didn't really have to live in one space."

For Waithe, who's also the successful creator of the multi-character social realist television drama, The Chi, there's still a magic to the process of seeing what she's put on paper brought to life on screen. She admits to always being blown away by it. 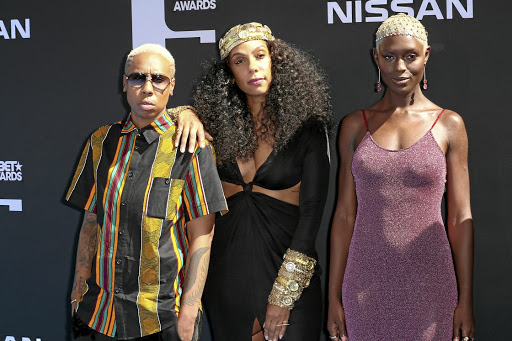 "I believe film happens in stages, so there's a stage where I'm by myself at the beginning, writing this stuff on the page and visualising it in my head and then there's a stage where I give it to Melina and she takes it and creates a visual style for it. That's when I feel it really starts to take shape. Then we have actors come in. In the edit we had this idea of having the words playing without the actors' mouths moving. For me the whole process is exciting because it shifts and grows and moves every time artistry touches it."

The success of films like Get Out and Black Panther have created a moment in which the mainstream is more accepting of stories that appeal to the overlooked black American audience. But Matsoukas still believes that there's an unfair burden that's put on black filmmakers and black films that they can't just exist and be.

"Why can't we just make a film that's about how we live? That's what I wanted to do. Because there are so few of our stories represented on screen, every time we make a film or series it feels like we have to represent the entire black experience. There's pressure to tell it in only one way. The truth is that we're not a monolithic group of people, we all have very different perspectives."

Queen & Slim has offered Matsoukas an entry into the mainstream for her distinctive style and culturally hybrid referential passions. Still, she hasn't lost sight of the fact that as a filmmaker she considers herself an activist.

"This is my weapon of choice - the camera. I'm representing our stories and giving voice to the unheard. I'm trying to represent people who are historically marginalised and discriminated against. I believe deeply in the power of cinema. It creates empathy and understanding for people and cultures. I grew up watching foreign films and they bring a global community together. I think cinema shows our commonalities and the power of our unity, support and love for one another."

SPONSORED | The SA-born director takes us behind the scenes of his gripping new movie, 'Official Secrets'
Lifestyle
1 year ago

Did the Academy get it right or were some people robbed of their awards? Our film critic weighs in
Lifestyle
1 year ago

We're back in a golden age of black horror films