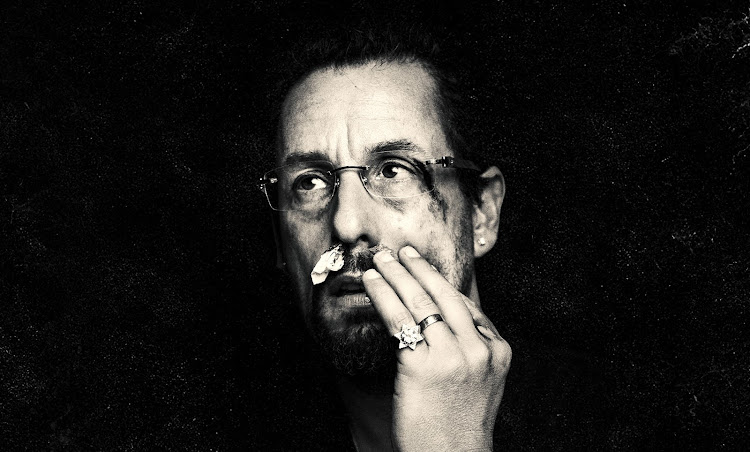 The Safdie brothers have established themselves as America’s most unnerving and psychologically intense present-day filmmakers. Their films are marked by situations in which characters, existing in the hustle of the underbelly of the brothers’ beloved New York streets, arrogantly believe they’re able to intuit more moves ahead than anyone else and are therefore immune to the follies of lesser men who end up being pinned down by the points of the arrows of outrageous fortune constantly slung at them by fate.

Their latest offering, a Netflix-funded, hard to watch, yet true to life, roller-coaster ride of unbearable emotional tension, delivers all the bittersweet satisfaction of a Shakespearian tragedy. This is thanks to a career-defining performance by Adam Sandler, singularly unnerving cinematography by Darius Khondji and a piercingly ominous score by Daniel Lopatin (known as Oneohtrix Point Never to serious electronica heads).

It’s the story of a week in 2012 in the life of nebbish New York diamond dealer Howard Ratner, who’s a relic of the old-school, New York schemer archetype being left behind by the flashy new money gentrification of the city. Yet he still tries to work the angles to make the best he can out of each situation he finds himself in. Howard, dressed in his uniform of outdated designer accessories, has a complicated life with many pots on the boil.

His increasingly strained relationship with his wife, Dinah (Idina Menzel), and their three kids who live in a Long Island mini-mansion must be balanced with a new romance with his store clerk, Julia (Julia Fox), and his prickly arrangement with jewel dealing hustler DeMany (LaKeith Stanfield), who helps Ratner connect with bling-loving sports dealers wanting to buy his glittering wares.

When Ratner sees a documentary on black Ethiopian Jews and the precious opals they mine, he decides to be at the forefront of a new trend and ship in a priceless gemstone from Africa. The precious cargo duly arrives and catches the attention of NBA star Kevin Garnett, who’s convinced that it will be his lucky charm in the upcoming play-off between the New York Knicks and the Boston Celtics. Garnett convinces Ratner to loan the uncut stone to him for the night.

Ratner, being a high-stakes gambling man, identifies a complicated series of moves that he thinks will secure him the windfall of a lifetime. He reluctantly agrees to loan the gem to the basketball player before shuffling down the street to smugly work on the increasingly frazzled nerves of his various bookies. When it comes time to collect, however, Howard’s world is thrown into an increasingly intense, neurotic and high-pressure maelstrom of chaos as he and DeMany set off to get his stone back.

Sandler has always had a unique mixture of bumbling simpleton charm and off-the-handle rage that have bubbled under the surface of his gross-out comedy schtick. Over the course of his 30-year-plus comedic career it’s been a characteristic that’s been mined by other directors including Paul Thomas Anderson (Punch Drunk Love), Judd Apatow (Funny People) and Noah Baumbach (The Meyerowitz Stories) to occasional good effect.

However, the Safdie’s unique ability to pile on scenes and plot twists that cause increasingly claustrophobic internal psychological strife brings out the best expression of this side of Sandler. As Ratner digs a deeper and ever more absurd hole for himself, Sandler relishes in the about-turns in personality that these situations allow him to express, and while it’s definitely not an easy to watch experience, it’s one that provides relatable if sometimes heartbreaking rewards.

You may not like him but it’s hard not to empathise with Ratner, finding yourself desperately rooting for his success. Whether or not you feel the outcome the Safdies have carefully orchestrated for him is fair on Ratner is left up to you and how cynical you feel about the ability of the world to deliver poetic, if unbearable, justice to people who play it too hard to their advantage.

Like Ratner’s life, Uncut Gems ultimately feels infuriatingly and uncontrollably chaotic — destined for explosion while also demonstrating the careful control and cinematic artistry of its creators’ bleak but honest vision of a mad world. It’s a world in which our deepest personal ambitions make us always prone to manipulation and false hope.

Mob movie 'The Irishman' is an instant classic

'Pain and Glory' may be Pedro Almodóvar's most personal work yet

With an excellent lead performance from Antonia Banderas, the movie shows the famed Spanish director is still capable of delivering provocative ...
Lifestyle
1 year ago