Were your parents thinking of a rice cake or a chocolate truffle when they named you? 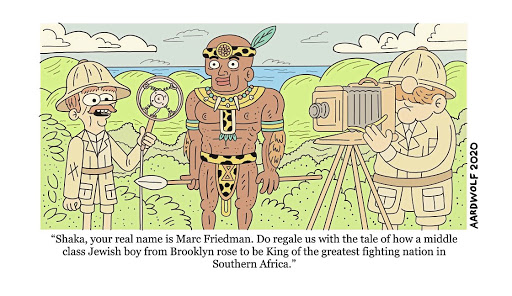 I have been toying with the idea of changing my name. Yes, I mean going to home affairs and formally changing it. The way I figure, "Ndumiso Ngcobo" has taken me this far and I'm not sure it can take me any further.

Take my elder brother. My father named him Mazwendoda. That means "The words of a real man". The background story goes that when my mom started dating him, "a mere, ordinary teacher", some of her family members pooh-poohed the notion that the union would go anywhere. A doctor, yes. Maybe a lawyer, even. But certainly not some "ruralitarian" chalk pusher. So when they got hitched 50 years ago, the country bumpkin took a swipe at the doubting Thomases, wryly remarking, "Sekuya ngamazwi endoda ke." (The words of a real man are coming to fruition.)

I think this is a freakin awesome story. It annoys me to no end, therefore, that by the time I was born some 14 months later, my dad had lost his sarcastic bone. Ndumiso means "praise". How spectacularly lame. Mazwendoda conjures up a Zulu regiment stomping menacingly towards the enemy chanting, "The words of a real man are here, suckers!" Ndumiso triggers images of a bunch of nuns holding rosary beads. If there'd been justice in the world, I would have been named Yaphindindoda ("The real man has done it again").

One of the pet peeves of middle- class "clever blacks" is that when we introduce ourselves to white people, we often get, "Interesting name. What does it mean?" Many times I've wanted to tell white folks that Ndumiso means "One who strangles people who ask annoying questions" before asking, "And what does your name mean, Traci with an i?"

But in all fairness it's a justified question. Black folks generally do tend to give their kids names that are pregnant with meaning.

Look, it's not lost upon me that Charmaine, Michael or even Koos have some historical meaning. However, in the year of our Lord 2020, the original meaning has lost any significance in the hundreds or thousands of years they've been passed on from generation to generation. I doubt too many parents name their kids Michael because they're asking "Who is like God?, according to the original Hebrew meaning. In the words of Bruce Willis in Pulp Fiction, "I'm American, honey, our names don't mean sh*t."

I feel strongly that the naming of a child is an opportunity to enrich human history with a story - good or bad. I know a trio of siblings named Mizamo, Kuyakhanya and Siphumelele. The direct translations are "Our efforts", "We see the light" and "We've made it", signifying the three phases of that family's history. Indeed, by the time "Siphumelele" came along, the family had moved from a mud house to a mansion.

Deeper meanings of names aside, I also don't think too many people give any consideration to how their kids will go through life with their names. Imagine that you're unfortunate enough to be born to a family with a mass-produced, cardboard surname like Smith. Or Mkhize. Or Naidoo. I think our offspring should reserve the right to hold public hearings to quiz their parents about their names. I think all parents who named their kids Mary Smith or John Smith have a case to answer. The same goes for Sipho Mkhize. Or Ravi Naidoo. I should know.

By far the most creative demographic insofar as naming children is country folks in polygamous arrangements. The competition, the jostling for power and influence, the skulduggery! These are just the perfect ingredients for the spiciest, most salacious and creative naming of children in the world.

In my former life as a high school teacher, I came across some of the best names under the sun. I taught a Bangifunani ("What do they want from me?"). I had a Sbangani ("What are we really fighting about?") There was a Jabhisa ("Depress them").

When I put the topic of names from polygamous settings to my Facebook friends, they did not disappoint. I received in excess of 100 submissions. There was a Phuthaliyenzeka ("Mistakes happen"). A Velubazibe ("Just ignore them"). A Sizwabesho ("Hearsay"). The list is endless. And I love it.

Most people in SA have rubbish jobs

If they're even lucky enough to have one, that is
Lifestyle
1 year ago

How do I love thee? Let me count the foreskins of these guys I slew

From Prince Harry to Henry V111, King Shaka's grandfather to King David: the things my species is prepared to do for love are nothing short of ...
Lifestyle
1 year ago

No coronavirus blues for this non-hypochondriac