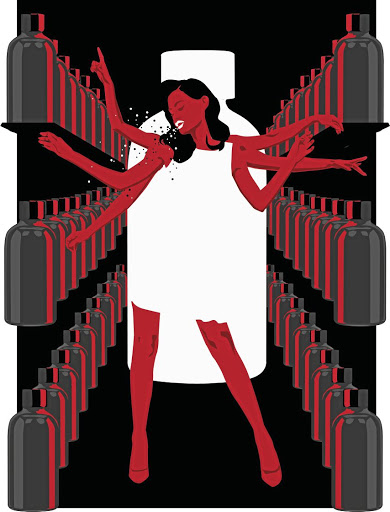 Karina M Szczurek is a writer, editor and literary critic. Most recently she released 'The Fifth Mrs Brink', a memoir, 'You Make Me Possible: The Love Letters of Karina M Szczurek and Andre Brink', and published 'Hair: Weaving and Unpicking Stories of Identity'.

In this short story, titled 'Toni's Touch', she imagines how the coronavirus pandemic will play out:

Time out of time. That is how she remembers it, the descent into chaos.

Toni thinks it was the woman in the white dress, buying a bottle of massage oil after a treatment. Her own personal patient zero. The way she'd touched everything and insisted on Toni's assistance, invading her space, trying out all the samples. She coughed, quite a few times, and did not cover her mouth, her face all red and glowing around her nose after the facial.

"Customer is queen!" said the sign her boss had put up at the spa's front desk. Even so, Toni didn't want to be rude, despite all the instructions from the authorities. She lost her job soon after anyway. They all did. The place had to close down.

The world got on with it.

"The survival instincts of the human spirit cannot be underestimated," Dr Dube told her after the shutdown when she became the receptionist for a family doctors' practice. They had the new vaccine. She felt strangely safe working there, knowing that, no matter what, she'd be needed, would be taken care of.

It had been rough and lonely in those weeks of isolation. Although Toni had been better off than most with only mild symptoms and her grandma's small inheritance in her savings account.

"For a rainy day," Grandma had told Toni when she was finalising her will in the last few months of her illness. Lung fibrosis. She got it a year before the pandemic and passed away before the virus wreaked havoc in the old age home where she'd lived.

The respected author imagines the very moment a man contracts the corona virus in his story, 'Open Wide and Speak, Memory'
Lifestyle
1 year ago

Much later, Toni thought of it as a mercy, that they could still bury and mourn her grandma according to her wishes. She had a proper funeral, with all who knew her attending the memorial mass without any restrictions, any fears. Just their grief.

Only a few months later, Mrs Jacobson, Toni's next-door neighbour at the complex, hadn't been so lucky. Her funeral was postponed; her family and friends had to grieve in isolation.

When it was allowed for them to gather again, Mrs Jacobson's son invited Toni to the service, thanking her for being such a good neighbour in the time of need, but she couldn't face going.

It is impossible to look at her hands without suspicion, without remembering the woman in the white dress

Toni recognises the everyday again. People, traffic, markets, impossible pace, greed, indifference. But she can't help obsessing about ordinary gestures. Everyone touching. The patients in their practice sitting in close proximity. The doctors shaking their hands in greeting. Her friends hugging her in abandon. Their laughter. She is overwhelmed by the return of tactile oblivion all around her.

It is impossible to look at her hands without suspicion, without remembering the woman in the white dress and the few days that followed when she wasn't showing any signs of illness and assisting wherever she could when they were getting ready for the shutdown.

She wishes she could be certain that Mrs Jacobson didn't die because of her.

The accomplished author puts a face to the masses of medical professionals who are having to leave their families in order to save yours in his ...
Lifestyle
1 year ago