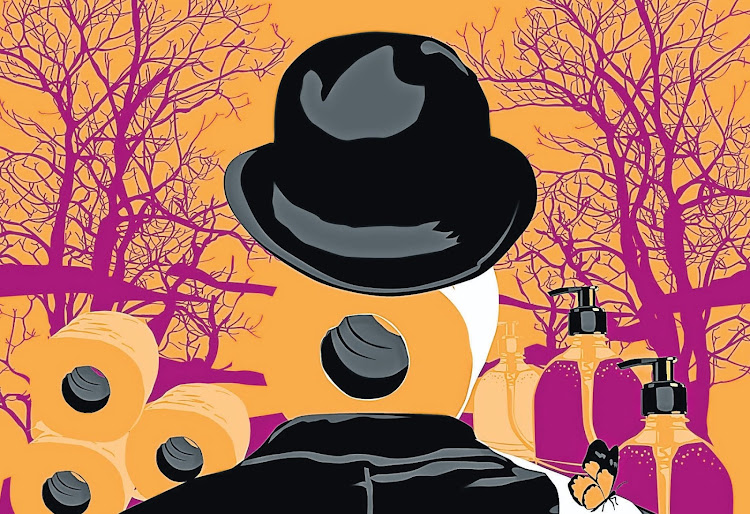 "'Tourism,' they said. 'You'll never go wrong with tourism.' ... Nobody ever said anything about hand sanitiser or toilet paper."
Image: Keith Tamkei

Mark Winkler has published several acclaimed novels including 'The Safest Place You Know', 'An Exceptionally Simple Theory of Absolutely Everything', 'Wasted' and 'Theo & Flora'.

In this short story, titled 'Waiting for the Bounce', he imagines how the coronavirus pandemic will play out in South Africa:

Vladimir sits on a low mound. One of his boots lies in the dirt next to him; he struggles to pull off the other.

Estragon stands by, his trousers around his knees. He has a bloody gash on a cheekbone and a black and swollen eye.

Vladimir: Not long ago I was a wealthy man.

Estragon: You and everyone else.

Vladimir: No, I really was. Until the Arabs did their thing.

The respected author imagines the very moment a man contracts the corona virus in his story, 'Open Wide and Speak, Memory'
Lifestyle
1 year ago

Estragon: Aren't you forgetting something?

Vladimir: "Oil," everyone said. "Put it into oil. You can never go wrong with that."

Estragon: So that little pandemic had nothing to do with it?

I really miss the small things. The skiing trips. The house in Plett. Crayfish Thermidor

Estragon: You know what wiped out the Aztecs?

Vladimir: Nobody ever said anything about hand sanitiser or toilet paper.

Vladimir: I really miss the small things. The skiing trips. The house in Plett. Crayfish Thermidor.

Vladimir: "Don't panic, it will bounce back," they said. "Sit tight — it always bounces back."

Estragon: Viruses, all. But it was people, really, wasn't it?

Vladimir: (gives up on his boot, looks up at Estragon for the first time). Did they beat you up again?

Estragon: Of course they did.

Vladimir: You sneezed, didn't you?

Vladimir: I suppose it's to be expected (he sneezes violently).

Estragon: There you go.

Vladimir: (starts trying to remove his boot again). I wish. I wish we would go somewhere. Anywhere.

Estragon: Well, anywhere's not going to help. We should go to The Tree - you know that.

Estragon: Apparently it's not that far away.

Vladimir: In the old days we could have taken the Audi.

Estragon: Repossession is a bugger, isn't it?

Vladimir: (gives up on the boot again, looks tearfully at Estragon). We were all supposed to die, weren't we? The young and the old first, and then the rest of us in the middle?

Estragon: A few of us did, to be fair.

Vladimir: And yet, here we are. Scratching in the dirt and waiting for the bounce.

Estragon: Here we are, scratching in the dirt.

Vladimir: I'm starving. Is there any of that pangolin sandwich left?

Estragon: (looks around). No. Shall we go?

Vladimir: (starts pulling on his other boot). Want to do your trousers up so long?

Estragon: No, not really.

Vladimir: Probably be easier to walk if you did.

Estragon: Where are we going?

Vladimir: I don't know. You said we had to go.

Estragon: Maybe we should just wait.

Vladimir: Yes. For the bounce. It would be terrible if we missed it. How would we know it's all back to business as usual, otherwise?

Estragon: We could just hang ourselves, you know. Just for shits and giggles.

Estragon: Brilliant. It'll be something to do, at least.

(With apologies to Samuel Beckett)

The acclaimed author imagines how the coronavirus pandemic will play out in her story, 'Toni's Touch'
Lifestyle
1 year ago