Musical duo lighten up lockdown with RooftopTune: '21 songs for 21 days' 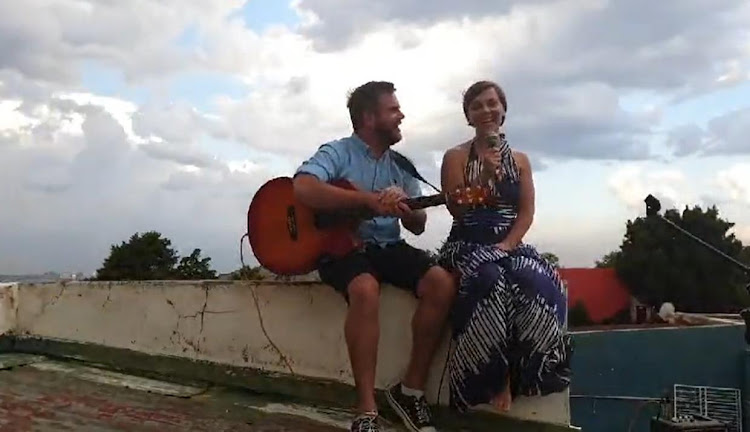 Armed with a microphone and ukulele, musical duo Eloise Clasen and Tiaan Rautenbach are staging #RooftopTune sessions from their Johannesburg suburb during the lockdown.

Inspired by the balcony singers in Italy, this duo has been performing one song each evening from the roof of their home since the beginning of the national lockdown.

“This is our South African rendition of singing to each other from balcony to balcony,” said Clasen.

As performers who are directly affected by the lockdown, they needed something to keep them sane while uplifting the community.

“All we want is for people to understand the gravity of being performers and what the industry does to uplift people in trying times,” she said.

Ons #DagDakDeuntjie of #RooftopTune everyday at 17:30. Which one would you like to hear? Let us know. Oooor sing your own one on the roof... Tiaan Rautenbach Neels Clasen

Going live on Facebook every evening has allowed their performances to reach a wider pool of people, including some international viewers.

“The love of my life, Neels Clasen, is the third person involved. He records us and sings along sometimes,” she said.

Along with positive feedback from the community the duo has also been receiving requests.

“Thanks! Could you do Here comes the Sun?," said one of the viewers, Gerhard Prinsloo.

Silvia Hildebrand described the performances as entertaining and relaxing, while Desiree Marnewecke said the performances now form part of her daily entertainment. “Recently, we’ve noticed some cheering after a song. It definitely makes for a feeling of community,” she said.

Day 6: Sitting on my steps watching the rain water my garden listening to Eloise Clasen and Tiaan doing there Rooftoptunes and have a cup of Ginger and orang tea.

Committed to giving the community 21 songs in 21 days the duo has also pledged to continue to perform after the lockdown has been lifted.

In an effort to create a movement around the initiative, the duo is encouraging others to follow suit.

“People can choose a time and day and do the same. If they can’t get on their roof, they can be innovative,” said Clasen.

All performances that use the hashtag #DagDakDeuntjie and or #RooftopTune will be posted on a Facebook page that Clasen plans to create.

For many performers and vendors, the coronavirus pandemic has meant an immediate cut in their income.
News
1 year ago

South African born tenor, Pierre van der Westhuizen, made waves this week after a video of him performing classical songs to his local community went ...
News
1 year ago

WATCH | Don't be a victim of Covid-19, leaders sing to Africa

Past and present African heads of state have joined together with Nobel prize laureates and musicians from across the continent to share a message of ...
News
1 year ago