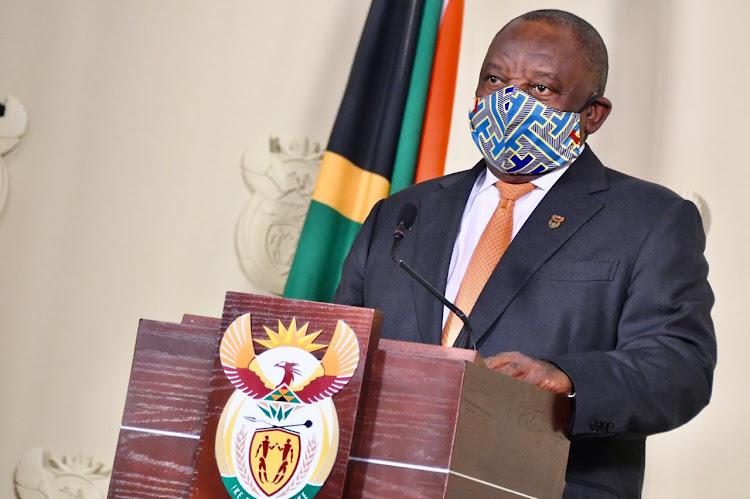 President Cyril Ramaphosa had social media chuckling after he fumbled with his face mask after giving a televised speech on April 23 2020.
Image: Siyabulela Duda/GCIS

As usual President Cyril Ramaphosa was a tad unpunctual as he appeared on TV to give an update on the state of the Covid-19 pandemic in the country. But as always, he was eloquent and oh so dignified as he delivered his speech — right up until the very end that is.

As Ramaphosa bid Mzansi goodnight, he did what all responsible South Africans should be doing right now: he masked up — or at least he attempted to. Aiming to cover his mouth and nose with a fabric mask, the president ended up donning it like an airplane sleep mask instead.

It was only a second or two before the president correctly adjusted his mask, but social media users were quick off the mark — cue the #maskchallenge!

Twitter has since been flooded with snaps of people sporting masks 'Ramaphosa-style'. Some are improvising and using everything from ice trays to condoms as blindfolds-cum-masks.

One user kindly excused Ramaphosa's blunder saying, “Mara guys it was nerves lol ... He's still the best president SA has had in a long time.”

No Corona virus formed against me shall Proper #maskchallenge pic.twitter.com/2YJJw31caL

Ramaphosa was never ready for the mask battle.
News
11 months ago

IN PICS | From Linda Mtoba to Liesl Laurie: celebs are loving the #PillowcaseChallenge

SA's celebs may be on lockdown, but this hasn't stopped them from dressing up — even if it means using their pillows as high-end couture.
Lifestyle
1 year ago

14 funny memes about life in lockdown only fashionistas will get

13 funny coronavirus memes only stressed-out parents will get