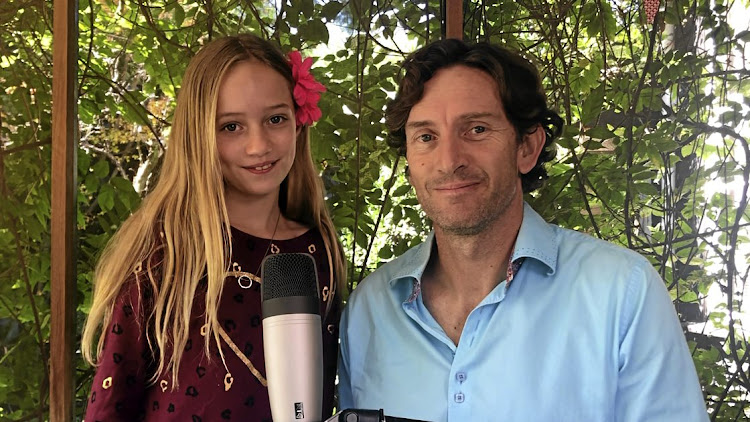 Emma and her father Adrian Galliard sing duets that are being shared around the world by 6-million viewers on social media.
Image: Supplied

It was supposed to be something to help pass the time in lockdown. Instead, a bit of amateur sound recording has launched a previously unknown Johannesburg father and daughter into the online hit parade — with 6-million views of one of their duets on one Facebook page alone.

Adrian and Kirsty Galliard knew their 11-year-old daughter Emma was a talented singer — she once belted out a Disney movie theme song in church — and helped her buy her first audio recorder shortly before lockdown. They never imagined that she would soon have an international fan base and invitations to perform live to a global cyber-audience.

“Emma didn’t have a huge amount of time until lockdown,” Kirsty told the Sunday Times. “We started playing around with the recording system.”

Emma was assisted by her father, also a singer, who helped pick out a challenging song for them to tackle together — a Celine Dion/Andrea Bocelli hit, The Prayer. Kirsty, a film producer, took care of the video and provided social media expertise.

“I uploaded it to my Facebook page at about 11am and then went off to cook lunch,” Kirsty said. “After lunch I happened to glance at my phone and saw it had 17,000 views. By the next day it had gone up to about 25,000. We couldn’t believe it.”

But that was nothing compared with the avalanche of views after the story was picked up by The Music Man website in the UK — as of Saturday, the video had been viewed more than 6-million times on his site’s Facebook page. “What we thought were good views … suddenly turned into millions of views once The Music Man picked it up,” said Adrian. “We’re getting messages from all over the world.”

The internet fairy tale couldn’t have come at a better time for Adrian, whose business has suffered as a result of the Covid-19 lockdown. “This lockdown felt like the end of the world, but in so many ways it has been a real blessing. I have been forced to relook at the music side of things, and have been able to connect with my children,” he said.

Now the plan is to carry on recording and grow their fan base, partly via live-streaming concerts — a musical feature of the global lockdown — and partly by taking up whatever other opportunities come their way.

Adrian said internet fame was an opportunity to do good by raising funds for charity. “It also gives us a wonderful sense of purpose that we can touch people’s lives and do something meaningful.”

Emma, who counts rock group Bon Jovi and UK operatic soprano Katherine Jenkins among her main musical influences, said social media fame had come as a major surprise. “I was really bored and didn’t know what to do. It has just been such a pleasure. I do get nervous but I like singing to the audience. Whenever I sing it makes me feel very happy.”

Before lockdown she, her older brother Chris and two cousins treated everyone to impromptu performances at the weekly family braai, making “Friday special” videos they sent to their grandparents.

Emma, who writes her own songs and enjoys acting and ballet, wants to be a TV actress and a singer.