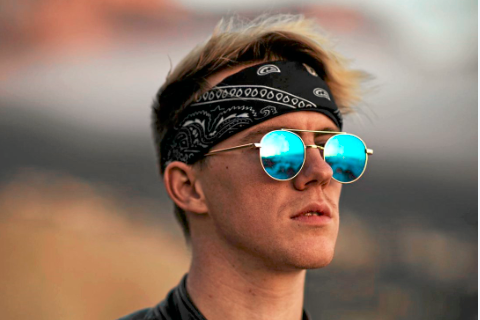 In the middle of a global health crisis, how do you get the attention of minister Nkosazana Dlamini-Zuma? Poke fun at her in a song.

That was the experience of Cape Town DJ and music producer Max Hurrell, 24, after he released his track Zol, which loops remarks of hers about why she thinks it’s not safe to smoke during the Covid-19 pandemic.

Hurrell told the Sunday Times he was initially nervous when the minister of co-operative governance & traditional affairs said on Twitter she wanted to discuss the track — but it turns out she has a sense of humour.

Instead of complaining, she sent him a direct message on Twitter on Thursday encouraging him to keep up the good work. The two then had an exchange about his music

“She said she was perfectly fine with it,” Hurrell said.

“She encouraged me to keep spreading positivity and laughter through this difficult time.”

Hurrell has made a few tracks based on gaffes by politicians and immediately saw the potential in Dlamini-Zuma’s comments about the government’s U-turn on the ban on the sale of cigarettes during lockdown.

“When people zol, they put saliva on the paper and then they share that zol,” she said, trying to explain why she thought smoking posed a contagion risk.

Her words immediately launched a flood of videos and memes. Little did Hurrell realise his song — dubbed SA’s “lockdown anthem” — would quickly ignite social media platforms and put him on the minister’s radar.

Within two weeks his track had garnered millions of views and hundreds of thousands of shares, and is climbing the Apple Music charts.

The former health minister, whose anti-tobacco stance led to tough legislation in the 1990s, drew the wrath of smokers again late last month when she quashed their hopes that the lockdown cigarette ban was about to be lifted.

President Cyril Ramaphosa himself announced it would be, as the country moved from level 5 to level 4 restrictions, but days later Dlamini-Zuma said the decision had been reversed.

She denied speculation that she and Ramaphosa were at odds, saying there was nothing sinister “in a change of position following a consultative process”.

On her official Twitter account on Wednesday, Dlamini-Zuma tweeted: “Who is this Max Hurrell fellow? We just need to talk.”

One Twitter user said in response: “Quite worrying that you would respond to this but not to the really important tweets and questions on your timeline.”

Her spokesperson, Lungi Mtshali, told the Sunday Times that the minister found the track funny.

“There is nothing serious here. The minister does not really have a comment on it, it’s just something she found funny at the time.”

Hurrell said after Dlamini-Zuma tweeted on Wednesday, he responded and sent her his mobile number in a direct message.

The next day the minister followed him back on Twitter and messaged him privately.

“Our entire conversation was on Twitter. I can’t go into what she said, but she didn’t ask for a retraction.”

Hurrell described the song as a “monster”.

“Imagine how upset people would be if the government took away the song after taking away people’s smokes. It was all tongue-in-cheek, no offence was intended.”

He believes the song took off because of its timing and the subject.

“I’m just glad it’s making people laugh, we could all do with a laugh at this time,” said Hurrell.

Comedian Tumi Morake, who is stuck in the US with her family, told the Sunday Times she was amused by Zol.

“It’s a funny song. It’s an upbeat song. Laughter is the best medicine even for the vile stuff we disagree with. If we don’t laugh during this billion-car pile-up that is Covid-19, we’ll lose our minds. It’s the best medicine, in addition to soap and masks.”

Loved the 'Zol' song? There is more coming!

Max Hurrell is ready for more but won't rush to release another track just for the sake of it. It must be quality - just like 'Zol'.
News
1 year ago

She now follows the music producer on Twitter, and he wants her to star in the song's music video.
News
1 year ago