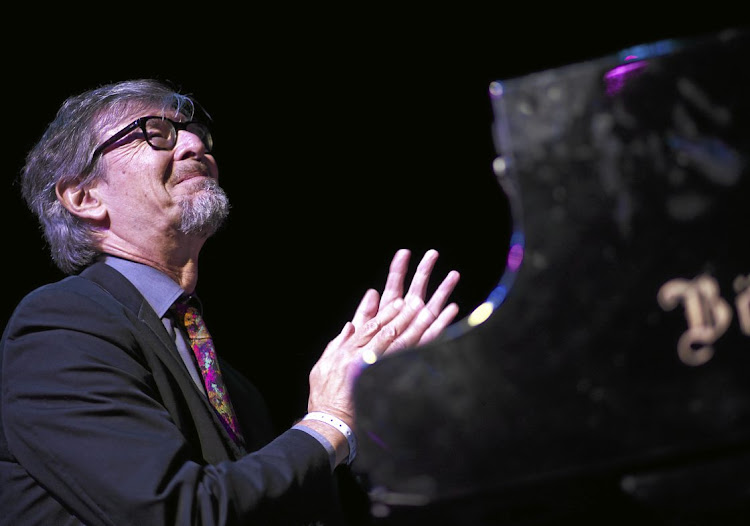 Darius Brubeck at a UK jazz festival in 2012. After a month in hospital in the UK battling Covid-19, he is back home and regaining his strength as musicians prepare for a thanksgiving concert in aid of the homeless in Durban.
Image: Alan John Ainsworth/Getty Image

As acclaimed jazz musician and academic professor Darius Brubeck waged a month-long battle against Covid-19 in the ICU of a hospital in the UK, it was not death he feared most but the thought of never seeing his beloved South Africa-born wife, Catherine, again.

The 73-year-old American pianist and composer, who co-founded the University of KwaZulu-Natal’s Centre for Jazz and Popular Music with her in the 1980s and still has strong ties to SA, was given a slim chance of survival by doctors after testing positive for the deadly virus in March.

Brubeck is the son of acclaimed US jazz pianist Dave Brubeck, regarded as one of the pioneers of cool jazz and best known for the jazz standard Take Five.

Now, as Brubeck slowly regains his strength at the home he shares with Catherine in Rye, East Sussex, she too is on a healing journey, recovering from post-traumatic stress disorder (PTSD) after nearly losing her husband.

SA has seen more than 20,000 Covid-19 cases, of which nearly 400 had resulted in death, the health ministry said on Friday.
News
2 years ago

His recovery has inspired the Piano Passion Project — a collective of pianists mainly with piano lineage to Brubeck — to host a virtual thanksgiving concert on Wednesday.

About 20 pianists in SA, the UK, the Netherlands and the US, who he either taught, lectured with or mentored, are set to perform at the concert. It will benefit the Denis Hurley Centre, which feeds and cares for Durban’s homeless.

Brubeck doesn’t know when or how he contracted the virus, but suspects it was while he was on tour in the UK with his two musician brothers, Chris and Dan, and saxophonist Dave O’Higgins.

“A good guess is at Ronnie Scott’s Jazz Club in London, where we played seven sold-out shows in five days beginning on March 3,” he told Sunday Times from his home in the UK.

By the end of the tour on March 13, Brubeck was ill. His brothers, who later also tested positive, flew back to the US. Dan was admitted to an ICU in the US, and Chris displayed mild symptoms and self-isolated.

“I resisted going to hospital for six days despite having a high fever and a persistent cough. Big mistake,” said Brubeck.

Brubeck eventually relented and was taken by ambulance to hospital, where he was tested and given a “50/50” chance of survival.

Despite being on a ventilator, the terrifying experience is imprinted in Brubeck’s memory, which he is unpacking by writing about it.

“I recall all of this in vivid, horrifying detail, which I will not share now but will at some point. What frightened me most was not the possibility of dying but the thought of never seeing Cathy again and the rather paranoid notion that she wouldn’t know what had happened to me.

“I really didn’t know what was going on for a lot of this time, but I kept my sanity by repeating, actually mentally singing, ‘Love is stronger than death’ over and over. This was the last line of the piece Chris wrote that we performed with an orchestra and chorus in Fribourg, Switzerland,” Brubeck recalled.

“We are now literally recovering together as she is diagnosed with [PTSD] while I am trying to regain full physical functionality.”

A Chatsworth man, believed to be the first person to have tested positive for Covid-19 in the sprawling south Durban township, has died nearly two ...
News
2 years ago

Covid-19 recoveries on the rise along with infections in Gauteng

Gauteng has more than 1,700 Covid-19 recoveries and an unchanged 27 deaths, the provincial department of health said on Friday morning
News
2 years ago