Sign language interpreters Andiswa Gebashe and Nicoline du Toit have become familiar faces thanks to their role in official Covid-19 briefings. They hope their newfound 'fame' will give a voice to the Deaf community 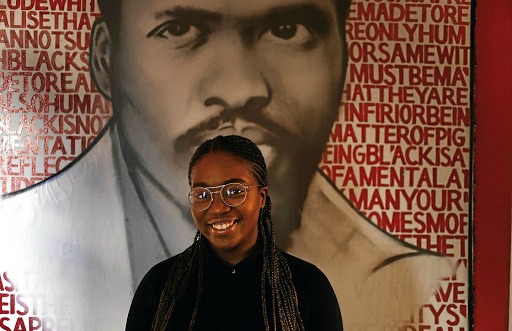 Andiswa Gebashe is one of the sign language interpreters at official briefings.
Image: Supplied

South Africans are captivated. The WhatsApps started circulating early on in the Covid-19 crisis every time President Cyril Ramaphosa addressed the nation. Conversations would turn to the sign language interpreters at the side of the screen who, together with the president, would enter our lounges, usually on Thursday nights, to bring us the latest on where we stood as a country. Any mention of them would inevitably result in a comment such as “I love those ladies!” and when the memes began they became low-key celebrities of a very unusual persuasion.

Sign language interpreters have sometimes made the news headlines for unfortunate reasons — who can forget the fake interpreter at Nelson Mandela's memorial service? But these days, they are making us smile.

Andiswa Gebashe is one of the familiar faces who's been interpreting the president's speeches and ministers' briefings. “Suddenly people are paying attention to the lady on the block simply because we have to find other ways of entertaining ourselves. I just blame it on the lockdown,” she says, laughter spilling through the phone.

Meet the woman who is a dab hand at being Ramaphosa

SA is quite taken with Andiswa Gebashe – who delivers good or bad news right next to President Cyril Ramaphosa.​
News
2 years ago

“It's also a wonderful thing because it's creating awareness. Before the lockdown people would not have paid attention to sign language as a language or interpreting or interpreters. But now that everyone is at home and doesn't have a choice but to look at the interpreter, it's created some positive and misunderstood attention.”

Gebashe says she's seen one or two unkind comments but this doesn't faze her. “That person is speaking from a point of not being aware and not having the knowledge of the language,” she says in reference to people's misunderstanding of the facial expressions that accompany sign language interpreting. These expressions are used to indicate the tone of the message, which is important in order to convey the meaning of what the person you are interpreting for is saying.

After a few of Ramaphosa's speeches, Gebashe became the national meme girl, together with her fellow interpreter Nicoline du Toit. If you've seen the memes that circulated following minister Nkosazana Dlamini-Zuma's explanation of how to roll a zol or Ramaphosa's failed attempt at donning a face mask — Du Toit is the lady of the moment. 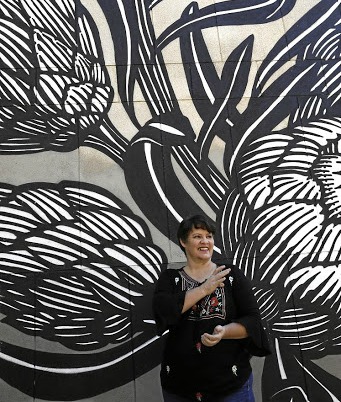 Du Toit, who took time to speak to us on Mother's Day, comes across as a calm, sweet woman who, like Gebashe, is passionate about what she does. She admits that it's difficult to keep a straight face at times but, for the most part, she doesn't realise when a funny moment is unfurling.

When Dlamini-Zuma made her zol speech Du Toit only saw the humour in it after she saw that it had become a meme. “I'm explaining what she's saying because she said you put it in and you roll it and the saliva and blah, blah, blah. So you get the picture. Afterwards when you see it then it becomes funny but while you're there, you're in the moment.”

She takes the memes that have circulated on social media in her stride and says South Africans just need to embrace the humour. Instead of being offended, she sees it as a way for people to laugh in these stressful times.

“It's very funny. I just think people are so creative, especially when the president put on his mask and it was a total disaster. I was standing there but I was standing in front of him so I didn't see what was going on at the back. I was wondering why SABC didn't say 'cut'.

“I think I wasn't even out of the media room when I got a WhatsApp with the first meme. When I got home I had 76 WhatsApps from different people with different memes.”

Laughter comes naturally to Gebashe and for this reason she says she dodged a bullet. “I thank God I was not the interpreter booked when the mask saga happened — I would have been fired,” she says.

“When you interpret you embody the speaker so you are neutral, your opinions don't matter. But my personality sometimes betrays me in the wrong moments and I'm glad that every time those moments happen I'm not the one on duty.”

Gebashe says she probably gets this from her father, who was a stand-up comedian. “I've been interpreting all my life, as my father is Deaf.”

She's been interpreting in a professional capacity for just over 10 years and says her father was an inspiration for her to become an interpreter.

As always President Cyril Ramaphosa was eloquent and oh so dignified as he delivered his update on the state of the Covid-19 pandemic in SA — right ...
Lifestyle
2 years ago

Du Toit is a CODA — a child of a Deaf adult. “Both my parents are Deaf, so I grew up with the language and the culture. As a CODA I grew up assisting my parents, helping them and speaking on behalf of them. Growing up we had much more responsibilities than your normal child would have.”

Both women hope the attention being paid to sign-language interpreters will be a positive force behind making South African Sign Language the country's 12th official language — a matter currently before parliament. 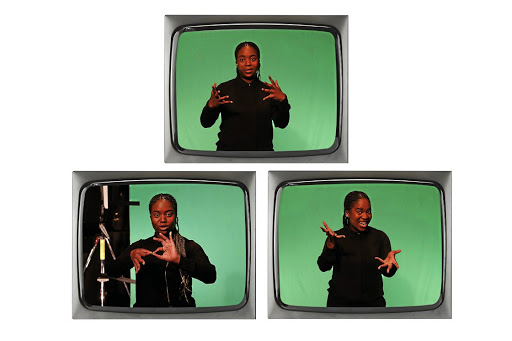 Andiswa Gebashe finds it very funny to be a meme.
Image: Supplied

At the beginning of the Covid-19 outbreak in SA, there were no sign language interpreters assigned to interpret important government communications. This caused an outcry in the Deaf community and the government approached Kwarenge Language Solutions — the company Gebashe and Du Toit work for.

“My father and millions of Deaf people get access to information only when there's an interpreter on the screen. It's painful to watch because it's been like that for years,” says Gebashe.

Despite the struggle to access information, Du Toit says this has been a beautiful time. “The highlight is the Deaf community sending video clips signing to you and saying thank you so much. We feel that we are at long last part of people getting the message. We are part of SA's citizens.”

Gebashe's wish is that people will come to terms with the fact that we'll never go “back to normal”. That we'll find a way to move forward and, in so doing, incorporate disability into everything that we do. “SA belongs to all who live in it and we all deserve a certain level of respect. We should all be included in everything that we do together as a country,” she says.

• The uppercase Deaf is used when referring to a group of deaf people who share a language - in this case South African Sign Language - and a culture.

She never missed a beat during the concert.
TshisaLIVE
2 years ago