In 2014, this Houghton nature reserve was overgrown and near-abandoned. Then artist James Delaney got a dog that needed walking and decided to venture in 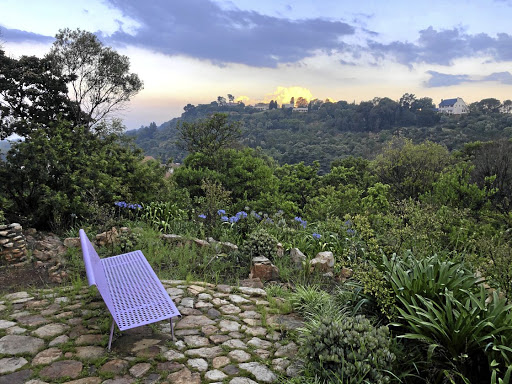 A view from the West Wilds towards the East Wilds, which follows the Houghton ridge for about 1km.
Image: James Delaney

I first visited The Wilds in 2014, though I'd lived right next to it for several years. My windows face the park, but it was so dark and overgrown one couldn't go in. People in my area saw it as an extremely dangerous place and none of my neighbours had ever visited.

But I got a dog, and because I live in an apartment I had to walk him. I'd drive to other parks but The Wilds had always intrigued me. Could it be so bad?

There's a pedestrian gate into The Wilds on my street, and the first few times I went in I'd tell my building's security guard to raise the alarm if I didn't return. I walked short distances along the pathways, not too far from the gate. 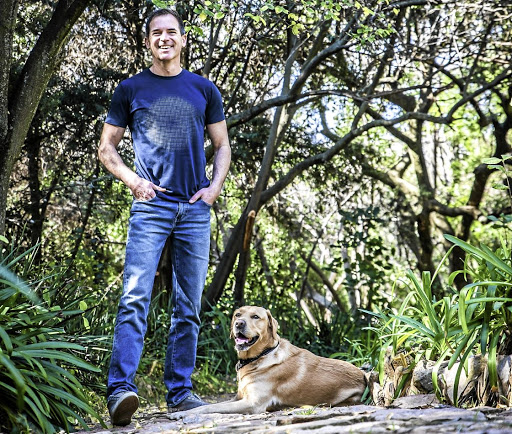 But there was exquisite beauty. A collection of magnificent indigenous trees, quite incredible for an area that was grassland just a century ago. Stone pathways crisscrossed the park. There was hardly anyone there - visitors were rare, but also there were no criminals, no squatters. Just beautiful, peaceful greenery.

One day, I discovered a small City Parks team mowing lawns and chatted to them. They'd worked there for decades and were all approaching retirement. They mowed the lawns and swept the paths, and grew vegetables for themselves in the nursery.

But the greenhouses were wildly overgrown, euphorbias spreading out across the ceiling. There were patches of tomatoes growing in the flowerbeds.

The staff were afraid of their own park, too. They told me they didn't walk to the extremes of the park. They kept the lawns, but left the rest

The staff were afraid of their own park, too. They told me they didn't walk to the extremes of the park. They kept the lawns, but left the rest. New benches lay in a heap at the entrance, delivered by head office but never installed.

Now that I understand more of the history of The Wilds, I realise I was seeing the benefits of volunteer TJ de Klerk's work the previous decade. Before him, there had been bad elements and crime. He'd lobbied City Parks and funders to have the park fenced, to install security, to open up overgrown pathways and more. But City Parks had worn him down and he'd stopped.

So walking with my dog, Pablo, I'd take clippers with me. I started with the cycads. I'd remove the branches collapsed over them, take off the dead fronds. I found many babies, and showed them to the on-site supervisor, who took them to the nursery.

I realised that The Wilds felt dangerous because it was so overgrown - I needed to open lines of sight so that walkers could see around them. From years of pruning trees, I also know that removing lower branches helps trees to grow higher, and lets light and water into the plants below.

I recruited Thulani Nkomo to help me and we started clearing undergrowth and dead branches every weekend - for three years. Every Monday morning, City Parks would find piles of branches - big piles. To their credit, they always removed them. I estimate that in those three years we cut 50 large truckloads of branches, perhaps more.

The plants on the ground got more light and water. Agapanthus, wild iris, wild garlic and more started flowering again. But they were old and woody and needed separating, so we began doing that, too, re-laying the flowerbeds (we still have a long way to go).

One of the things that makes The Wilds so remarkable is that it's all indigenous planting, even though it dates back to the colonial era, when people liked planting oak trees and roses. I'm an enthusiast rather than an expert on indigenous flora, and so have leant on the knowledge of many horticultural experts. The Wilds used to have full-time horticulturalists, but that was a long time ago.

I tried getting friends to help, and sometimes they would spend a few hours on a Sunday. We'd go section by section - it was hard work. I started with the path between the gate I use and Fever Tree Lawn. Then the area around the lawn. Then the yellowwood forests. It was an extraordinary process - we'd start clearing and then find a yellowwood tree so big you couldn't put your arms around it, and then another, until a whole forest came into view.

Then the wild olive forest. Then down towards the big lawn. Then up to the sundial. Piece by piece, slowly opening it up. We also trimmed the perimeter, so residents of the adjoining blocks of flats could see in. I dropped off letters, asking people to become the eyes and ears of The Wilds, to keep it safe. I even put bird feeders up inside the park, to get them to look in.

I'd started developing better communication with City Parks head office, and started developing relationships with people who wanted to help. The managers were aware of what I was doing. They'd sometimes contact me, but never inspected my work. So I just carried on. But I realised I needed more hands, in the form of volunteers, and it was clear I'd need to do some fundraising. Once people saw The Wilds, they'd fall in love. But how could I get them in?

I spend time in New York every year, and I'd learnt the story of Central Park. Viewed in the '70s and '80s as too dangerous to visit, it had been fixed up by local residents, who raised funds too. Today, almost 70% of Central Park's operating costs are paid for by donations. Also, they encouraged dog walkers to run their dogs off-leash to make the park safer. I needed something similar for The Wilds. 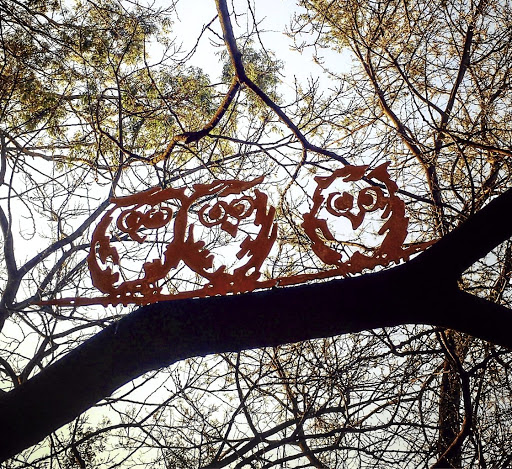 I came up with the idea of sculptures of owls, suspended in the forest. I made charcoal drawings and was introduced to Chris Lenferna, who helped laser-cut them at his factory. They were painted bright colours to stand out from the dark forest canopy. I hoped they'd draw people's attention to the trees, and create something they'd talk about on social media.

I tied it to Mandela Day 2017, when people give of their time to a good cause. I cut 67 owls, one for each year Madiba gave in public service.

Hundreds of people came that day, armed with clippers and saws. Kids screamed with delight when they saw the owls. Parents picnicked, people chopped and cleared and planted.

And now the real work could begin. It's been almost three years since that day, and The Wilds has been transformed.

I developed some strong relationships with positive people at City Parks, and some politicians, who helped me. Being a volunteer, I was always the outsider and that isn't easy.

City Parks hired a team of 10 workers as part of the Extended Public Works Programme job-creation project. This has made a big difference for weeding, mowing and planting and they are enthusiastic to learn. 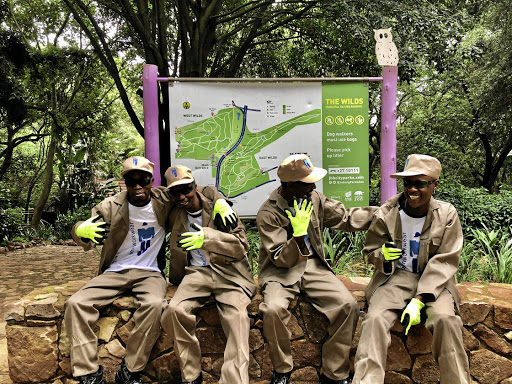 I partnered with the Johannesburg Heritage Foundation and together we signed a memo of understanding with City Parks. This legitimised the work I was doing, and enabled me to do fundraising through them - so people could make donations to an official non-profit, and they administer the funds.

My team grew. Apart from Nkomo, there's Alfie Letuku, whose salary is paid by a generous benefactor. He works on planting, path restoration, weeding and other projects, full-time. Lovemore Chivhunze does plumbing, Alex Nxumalo fixes fences and does all manner of small projects, and Thulane Nkosi and his team of three do stonework - paths and retaining walls and so on. 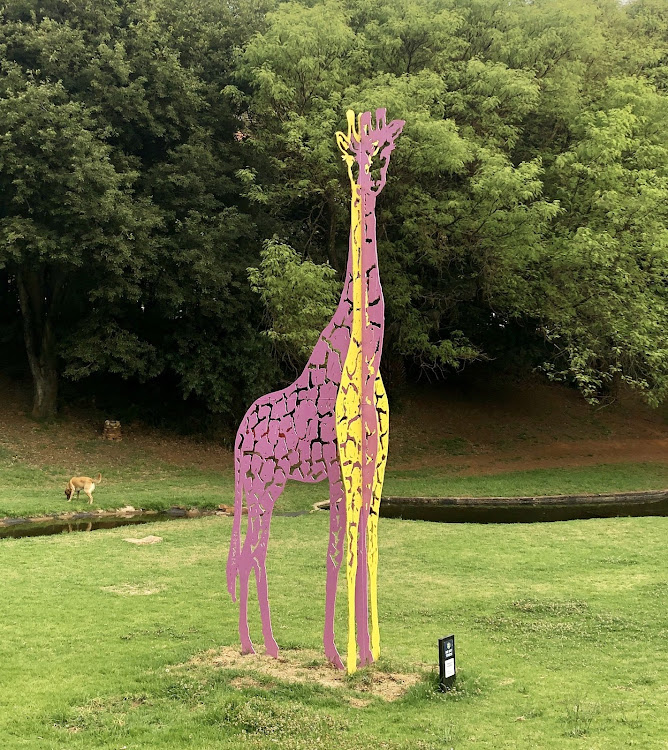 A 5m-tall sculpture presides over the Giraffe Lawn in The Wilds.
Image: Supplied

As the sculptures became popular, I used them to open up sections of the park that people weren't visiting. There are now 100 sculptures - monkeys, a pangolin, ostriches, the red kudu family, klipspringers, duikers and more.

The largest is a 5m-high pink and yellow giraffe on what is now known as Giraffe Lawn. This is an important piece as it is visible from the road, drawing the attention of passers-by.

Recently, people have donated collections of plants - a group of tree aloes for the Houghton side, hundreds of clivias for the Owl Forest, succulents for the rocky hilltops, fever trees and more. The Wilds began in the old days with donated collections, so it's wonderful to see it happening again.

I've had some memorable walks across The Wilds, with benefactor Adi Enthoven talking indigenous plants, with William Kentridge recounting childhood memories of the park and committing funding for the next three years, with former mayor Herman Mashaba talking politics.

Fellow artist Pat Mautloa told me he'd had his wedding photographs taken there in the apartheid years - he says everyone did, no matter their race. This is a place of remarkable memories.

It wasn't all easy going. The physical work was tough but greatly rewarding, and people donated tools and chainsaws and plants, which helped us. But I was offending some people at City Parks; several times they have used obscure bylaws to stop me. Who knew that park benches must be painted green, or that a tiny yellowwood sapling can only be moved by the forestry department, even when it's about to be stood upon, and there is no forestry department?

For a few months, young local entrepreneurs ran a fabulous coffee stand in the car park on Sundays, which brought great energy and a sense of welcome. City Parks never visited on weekends, so they didn't know about it. Then someone found out, and sent in the park rangers and cops to shut it down. That was a low point.

But the momentum was established. The car park now overflows all weekend - queues of cars trying to squeeze in. When I drive to my studio on weekends and pass the little traffic jam at The Wilds, it lifts my heart. I always tell people a well-used park is a safe park.

The Wilds has won several awards and has an official Blue Plaque for heritage from the City of Joburg, unveiled by the local councillor.

The Wilds inspires a great love for landscape, for plants, for people, for art, and for the city. People give to the park all the time - their time, money, plants and enthusiasm. About 2,000 volunteers have worked in The Wilds over the past three years. R1m has been raised and spent on improvements. There are 4,000 members of Friends of The Wilds.

It's a constantly evolving labour of love for so many Johannesburg residents.

May it grow from strength to strength, and may the message of restoring green spaces spread along these ridges and across the city.

• This is an edited version of Delaney's story. Read it in full at delaney.co.za. Join the "Friends of the Wilds" Facebook page for updates and info.

Cheap playing cards slapping against concrete – “Twa! Twa!” – are louder than you might think. And in a leafy rectangle of grass and concrete in the ...
News
1 year ago

When architect Pierre Swanepoel and gallerist Monna Mokoena took a dilapidated electrical substation in Forest Town off the City of Joburg's hands in ...
Lifestyle
1 year ago

Like its sister establishment, Delta Cafe, this eatery is family-loving and dog-welcoming
Lifestyle
1 year ago