'There was a lot of fearlessness': Zozi Tunzi sees Soweto of ’76 in BLM protests 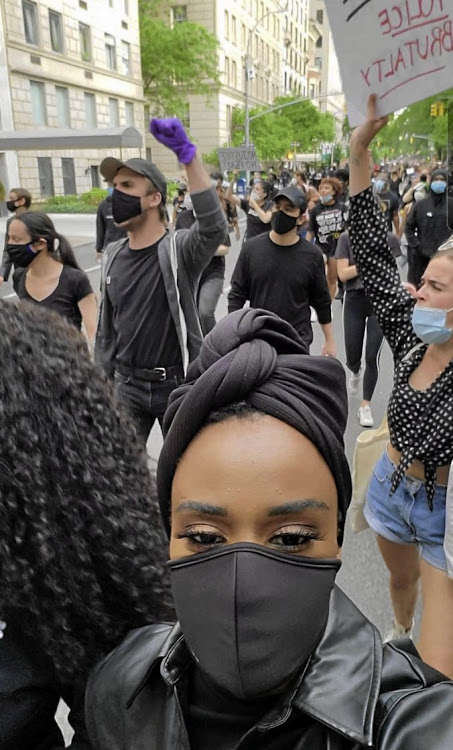 Joining the Black Lives Matter protests in New York was a stark reminder that black people everywhere still have to fight for acknowledgement, says Zozibini Tunzi.

Becoming Miss Universe has not exempted Tunzi from racism. Tunzi, 26, says she receives weekly comments and messages on social media saying she’s not worthy of the crown.

She says it’s been an emotionally and mentally overwhelming time for her. Aside from living in a Covid-19 hotspot in the US, she also experienced the protests sparked by the death of George Floyd.

“There was a lot of determination, raw emotions and fearlessness. You could see it on the people’s faces and you could feel it in the air. Everyone was fed up and demanding to see change,” Tunzi said of a march that took place on June 2.

“At least twice a week I have to deal with comments or DMs [direct messages], about the colour of my skin and why I shouldn’t be where I am and why I’m not deserving. People would constantly call me ‘black girl’, ‘the monkey’, and all those derogatory terms.”

For Tunzi, the protests in the US are reminiscent of apartheid SA, except that this time she has a front-row seat as opposed to reading about it in history books.

“The uprising in 1976 was because students had enough of the oppression and the racism and they decided to take to the streets. This morning I saw this thread on Twitter speaking about racism in schools that young South Africans still have to deal with today. It’s shocking that something students were marching for in 1976 is something that our students still have to deal with in a democratic South Africa.”

Social media posts about racism left her shocked, but it was the recent brutal murders of women in SA that left Tunzi heartbroken. Last week, makeup artist Tshegofatso Pule, 28, was stabbed to death and her body was found hanging from a tree in the veld in Roodepoort.

In another incident, Naledi Phangindawo, a Mossel Bay mother of two young children, was hacked to death.

“Seeing those posts were so heartbreaking, and waking up today and seeing people still sharing and adding more names of women who have died during this time, it’s just too much. I don’t know how many more women need to cry to be listened to. It’s a crisis and should be treated with the urgency it deserves.”

Zozi says brands must not only support black people when it comes to music and their culture, but they must speak up on important issues as well.
Lifestyle
1 year ago

Zozibini Tunzi said a shift is necessary to improve the lives of women who are vulnerable to abuse.
Lifestyle
1 year ago

'I don't know if my reign will be extended', says Miss Universe Zozibini Tunzi

Zozibini Tunzi said like her fans, she doesn't know if her reign as Miss Universe will be extended as it is being thrown into uncertainty due the ...
Lifestyle
1 year ago