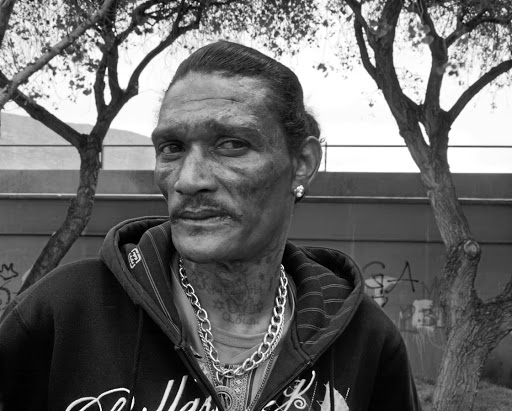 Blitz Maaneveld at the Terrace, Woodstock, Cape Town, where he murdered a man with whom he had been gambling.
Image: David Goldblatt

In the introduction to the new posthumously published book of his long-running series of Ex-Offenders at the Scene of Crime, photographer David Goldblatt writes of how, "in fear, humiliation, helplessness and anger at holdups of my wife and myself by men threatening force with guns and violence, I have asked, Who is doing this to us? Who are you? Are you monsters? Are you ordinary people - if there are such? How did you come to this? What is your life? Could you be my children? Could I be you?"

As one of the foremost practitioners of documentary photography over a six-decade career, during which he received most of the world's pre-eminent awards and international acclaim for his work, and as a man with an insatiable curiosity to examine the perplexities of the South African - and the human - condition, Goldblatt's natural instinct when faced with these questions was to pick up his camera, get in his car and go and try to find answers, however contradictory or unsatisfactory the results.

The 48 images collected in Ex-Offenders at the Scene of Crime, published by renowned art publisher Gerhard Steidl, cover a seven-year period from 2008 to 2015 and present several anomalies within the overall history of Goldblatt's work, while still emerging as distinctively Goldblatt pictures.

For one thing, the project represents only the second time in his career that Goldblatt produced a series of work that ventured beyond the borders of SA. This was thanks to an invitation from Multistory, a community arts project based in West Bromwich in the UK, to extend the scope of his inquiry to include the stories of British offenders. 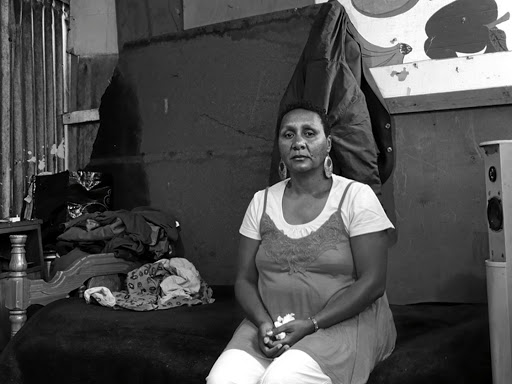 Here, on his bed, in 2007, Ellen Pakkies strangled her son Abie, after his need for money to feed his drug addiction had led to him robbing the household of everything saleable for so long that she could no longer bear the strain.
Image: David Goldblatt 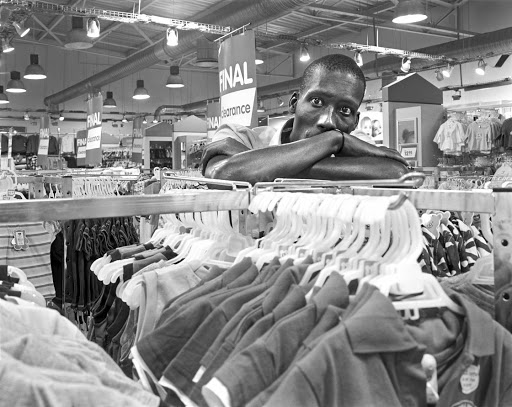 Errol Seboledisho where he was arrested for shoplifting in 2002.
Image: David Goldblatt 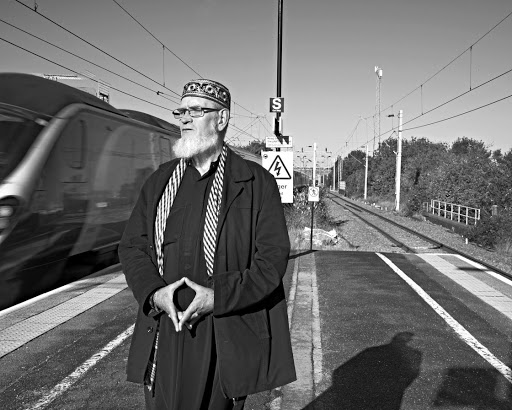 When he was arrested here on Dudley station in England, on 12 August 2003, Yasin Ali Mohammed was carrying a bag with 14kg of heroin and a 'Harry Potter' book to read on the train.
Image: David Goldblatt

The book is divided between pictures taken in SA and those produced in the UK. Goldblatt took the unusual step of paying his subjects for their participation in his project, in an attempt to pre-empt the fact that "those whose portraits and stories I sought would very likely be resistant to go back to the scene of crime and would probably be suspicious of my motives".

He also made a public declaration that he would make no money out of this work: "After paying gallery or other commissions and taxes, any income from this work would be devoted to the rehabilitation of offenders. Those who I have photographed and interviewed signed a release allowing me to publish and exhibit the work."

Goldblatt was keenly aware that the practice of paying his subjects meant that the project, was, in his words, "abhorrent to the practice of good journalism and makes questionable the validity and truthfulness of what I am told", but he was adamant that he owed, "allegiance to no-one other than my subjects and myself."

Since the beginning of the project and up to and beyond his death in June 2018, selections from the series have been exhibited in various of Goldblatt's many exhibitions across the globe, but this book marks the first time that they have been collectively presented as a stand-alone series.

Goldblatt completed the proofs and selection of images for the book before his death and the remaining work of completing the stories told by the subjects was handled by his daughter Brenda Goldblatt.

Roger Ballen's eerie photos as you've never seen them before: in colour

After 50 years of shooting in black and white, the influential photographer has embraced colour in his work - and somehow this makes his distinctive ...
Lifestyle
1 year ago

Brenda says the experience of the interaction between Goldblatt and his subjects within the overall conceit of posing them at the scenes of crimes "became, for some, an emotional catalyst".

Goldblatt describes the process in his introduction. It was one in which all of the subjects experienced a moment of gravity as they were provided with an opportunity, possibly for the first time, to tell their story without being judged.

He says that "it is possible that facts have been concealed or distorted", but his "interest is in what the subjects have to say about their life, their crime, their hopes and fears, [and so] the elisions and truths are part of it and I do not attempt to test the accuracy of what they tell".

When you page through the book, produced in an unusually large format and hand-bound so that it can be opened flat to allow the reader to see the subjects and read their stories simultaneously, common threads emerge.

Brenda recalls: "David often spoke about how almost all the people he photographed - except some of the people from the Cape, who ended up in the Numbers gangs - wanted to go straight, and get jobs, and how impossible that is here and in the UK."

She says that another common link between the South African and UK subjects is "how deprivation - whether it is actual poverty or not having what they want - led young people into crime. For me there was a strong common factor: many of the men here and in the UK talk about their lives changing when they are around 10, which may be a time when boys have greater mobility in their communities." 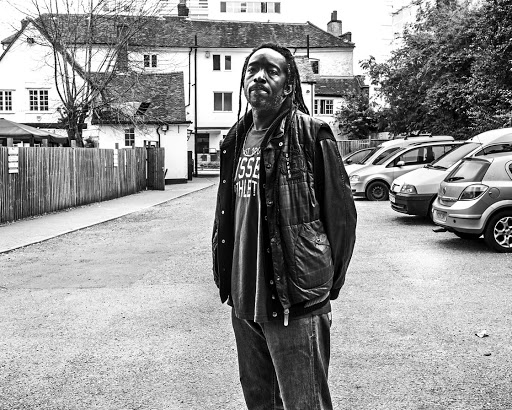 Richi Ellis served 11 years after being convicted for joint enterprise for a murder that happened here. He was 600m away at the time of the victim's death.
Image: David Goldblatt 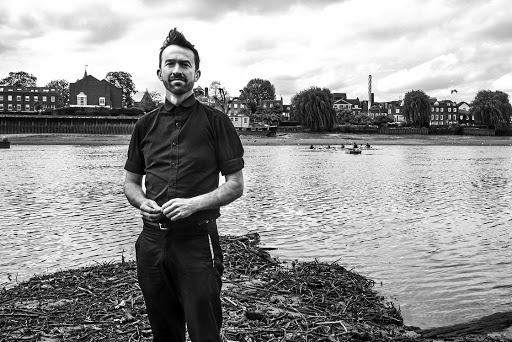 Trenton Oldfield near the point on the Thames River in the UK from which he dived on 7 April 2012 and disrupted the Oxford-Cambridge boat race.
Image: David Goldblatt 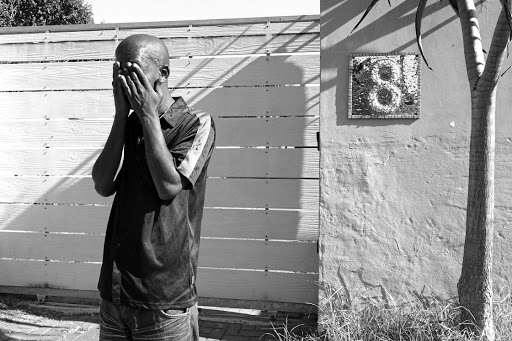 Xolani Seko stands weeping outside the house where, in 1995, his erstwhile employer was accidentally killed after attempting to have sex with Xolani, East London.
Image: David Goldblatt

From pictures of petty thieves to fraudsters, drug dealers, armed robbers and murderers, the images adhere to Goldblatt's dedication to making no judgement of the actions and life circumstances of his subjects.

But as you turn the pages of the book and are confronted by the images of the offenders returned to the places where their lives were changed in a strange, almost ghostly visual illustration of the intangible complexities of the relationship between past and present, bodies and places, it's difficult not to see something that links them, however hard it may be to pinpoint exactly what that is.

Perhaps something in their eyes that speaks of a life of hardship, traumatic prison experiences, regret and disappointment - but also a recognition of the attempt to reform and rehabilitate and the unique difficulties of that journey. That may be a reading that's heavily influenced by our own prejudices and moral superiority - the idea that "there but for the grace of privilege, circumstance, environment, education or opportunity, go I".

That sentiment is also an inevitable consequence of the interaction between the gallery or exhibition audience and the subjects of Goldblatt's photographs, which he foresaw and addresses at the end of his short but thorough and astute introduction to the book.

He writes: "Could I be you? With white skin, good education, a loving and generous family in a comfortable home, the question is bizarre. Ask rather whether I could be you if I stood on street corners waiting interminably for someone to offer me work day after day with no help of permanent and even rewarding employment. I would be very surprised if I were not. Which does not mean that I would welcome the man with a knife the next time that he comes at me. Only that I wish we had done better with what became possible in 1994."

The strength of the collection of images lies in the way in which they act not as a collective demonstration of shared characteristics of otherness but rather in the similarity between the subjects and us as viewers, regardless of our own backgrounds, criminal records or lack thereof. The shared humanity of the people and stories presented shines through more strongly than any comfortable, easily identifiable differences between "them" and "us". 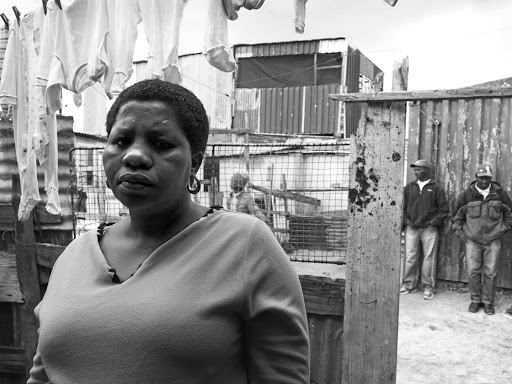 Khulelwa Pali at the house in Site B, Khayelitsha, Cape Town that she burgled in 2008.
Image: David Goldblatt 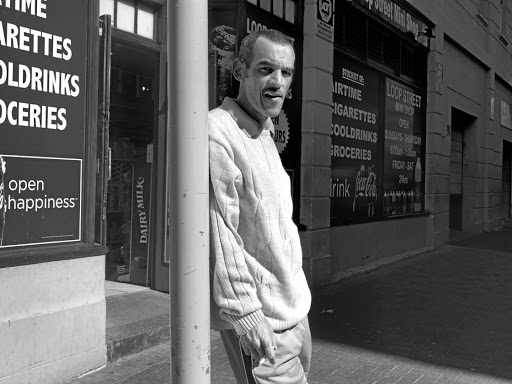 Moeneeb Jacobs at the shop in Loop Street, Cape Town, where he shot and killed the owner.
Image: David Goldblatt 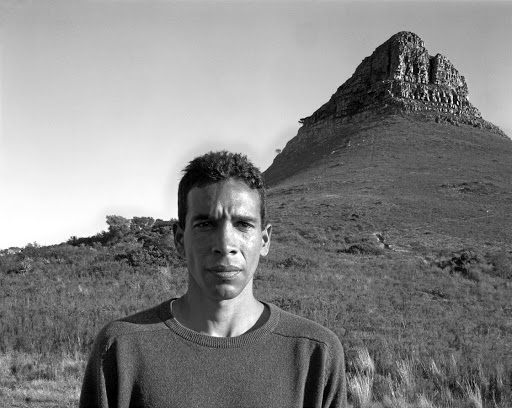 Here, high on drugs, Cinto White and a friend robbed a man after Cinto had shot him.
Image: David Goldblatt

Goldblatt clearly understood that his work with ex-offenders was, on one level, "naïve, non-scientific and of no reformative value". Yet it is also so much more than that, for whatever your position on crime and criminality and its causes, Goldblatt's work here is powerful because of the way, as he did in so much of his career, the photographer manages through a deceptively simple but effective conceit, to strip away our preconceptions and force us to ask bigger and more difficult questions about the roots of what we are seeing and how we see it.

What is the difference between a law-abiding citizen and a law-breaker and how thin is the line that separates them? Who is invested with the power to draw that line? What are the consequences of transgression and how effective are they really?

These are questions that have no easy answers. Then again, easy answers were never part of Goldblatt's project as a photographer and he would not have had patience for or dedication to the series for such an extended period if it only provided pat, easy and comforting affirmations of traditional divisions between right and wrong, good and bad.

The investigation was always more interesting and necessary for Goldblatt than its conclusions, and Ex-Offenders shows this.

It also reaffirms Goldblatt's particular power as a documentarian whose six-decade career stands as testament to theorist Susan Sontag's assertion that "the ultimate wisdom of the photographic image is to say: 'There is the surface. Now think - or rather feel, intuit - what is beyond it, what the reality must be like if it looks this way'."

Photographer Jabulani Dhlamini examines the strength of the rainbow nation's foundation in his latest exhibition, 'Isisekelo'
Lifestyle
2 years ago

Four young men in Mpumalanga share their fears, frustrations and ambitions as they document life in lockdown through their photography.
Lifestyle
1 year ago
Next Article