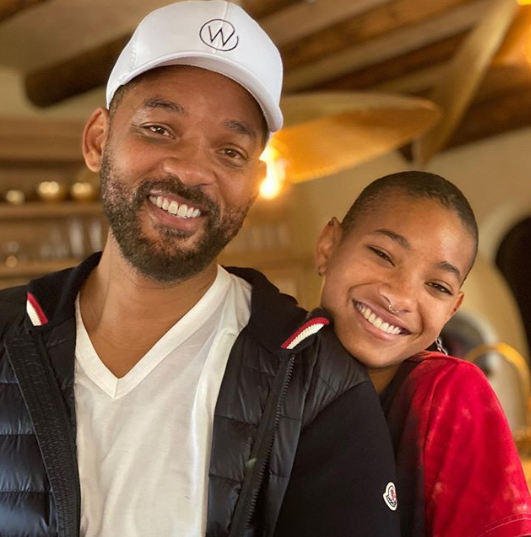 Will Smith says raising his daughter Willow has been his biggest parenting challenge.
Image: Instagram/Will Smith

American actor Will Smith has opened up about his relationship with his late father and shared his personal experiences of fatherhood and raising three children. He was in conversation with his wife Jada Pinkett Smith, on Red Table Talk’s Father’s Day special.

Reflecting on the lessons taught by his father, Smith described him as “the smartest” person he knew, who taught him discipline and the importance of building and providing for his family.

At the age of 24, Smith became a father to his first-born son, Trey, with his former wife Sheree Zampino. He said this experience not only cemented the sense of responsibility, which he was taught by his father, but it also intimidated him.

“That was my first moment of the real weight of parenting. It was like, ‘I’m totally responsible for this life.’ I couldn’t stop going and checking - I had to make sure he’s breathing. I cried thinking, ‘I can’t do it - I’m not the guy.’ I just knew I didn’t know anything.”

His father was “old school” - a kind of mentality that he also inherited.

He said he focused more on wanting to teach Trey how to “work and build” more than attend his school events and games. He said when he finally “surrendered” to being present in a way that his son needed, despite his work being time consuming, everything changed.

“There are very few things in my life that I enjoyed as much as watching that boy play football. He could feel my authentic joy of me watching - not because I’m his father and I have to.”

Some of the lessons learnt from fathering Trey helped him better his role in parenting Willow and Jaden, who were home-schooled. This decision was to allow them to spend more time together as a family.

My kids being with me is of a higher value than them sitting in a classroom.

“One of the reasons why they were home-schooled was I had learnt that you can’t father from a distance. My kids being with me is of a higher value than them sitting in a classroom. I felt the nature of my job had me physically and mentally distracted, so I had to make up for that with presence.”

The most challenging part about parenthood, said Smith, has been getting to understand his daughter Willow, who rejected his “old-school and military mindset” in terms of parenting.

At nine years old, Willow’s hit song Whip My Hair became a huge success and had signed with hip-hop mogul Jay-Z’s Roc Nation label. She was on tour with Justin Bieber when she began to rebel and insist on shaping her career the way she, and not her father, wanted.

“I saw how much I was making, forcing and pushing the things that I wanted. In that moment, I just saw that it was starting to hurt her. My desire for her was hurting her desire for her. I had a real epiphany on that and how bad a person will hate you if you keep forcing your wishes onto their life.

“She introduced me to feelings. I would say that Whip My Hair thing put a pause button on my over-parenting. I stopped and I just started watching my kids.”

It's a day to celebrate good dads, and remember good ones who are gone

Father's Day, like Halloween and Juneteenth, is a tradition made popular in the US, whence it spread to the rest of the world.
Opinion & Analysis
1 year ago

Around 20 000 fans gathered to remember Kobe and Gigi Bryant.
TshisaLIVE
2 years ago