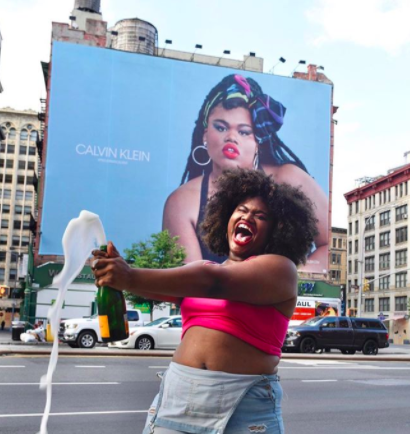 Jari Jones said inclusivity in the Calvin Klein Pride campaign wasn't just for her, but also for the next generation.
Image: Jari Jones/Instagram

American fashion house Calvin Klein has made history by including its first black transqueer and plus-sized model as part of this year's Pride campaign, honouring the LGBTQI+ community.

Jari Jones, an actress, model and activist, was this week revealed as one of the members who has joined the brand for the campaign. In a now viral post, the model, who identifies as a transqueer lesbian, can be seen celebrating the moment in front of a huge billboard of herself.

Jones said inclusivity in the campaign wasn't just for her, but also for the next generation.

“I decided to create these moments not for me but for the next dreamer, outcast, queer, trans, disabled, fat, beautiful black piece of starlight waiting for their moment to shine,” she said.

“It has been such an honour and pleasure to sit in my most authentic self and present imagery of a body that far too often has been demonised, harassed, made to feel ugly and unworthy and even killed.

“I present this image, myself and all that my body stands for, to my community and chosen family in the hope they see themselves more clearly than ever, and further realise they are worthy of celebration, of compassion, of love and gratitude,” she said.

Jones acknowledged the hate and scrutiny the campaign received, saying she wasn't bothered by “things and miserable people behind computers and phone screens who try to suck out every ounce of joy I have left in my body”.

On social media, Calvin Klein got the thumbs up for shining a light on transgender people.

Calvin Klein @CalvinKlein did it and made Black Transgender Queer Lesbian plus size model, JARI JONES (whose wife is also transgender, and their "adopted children" are all LGBTQQIA) the new cover girl on the billboard right there in Greenwich Village NYC. #BlackTransLivesMatter pic.twitter.com/3D1QAnYmvq

it'll be even more super amazing when representation goes deeper than marketing campaigns for corporations.

A black, transgender, plus size model just became the newest face for Calvin Klein.
Jaris Jones, so much love to youu!

Mahlatse Nkuna is on a mission to raise about R519,900 for her sex reassignment surgery
News
1 year ago

Malaysia's top court has given the go-ahead for a man to challenge an Islamic ban on sex "against the order of nature", his lawyer said on Wednesday, ...
News
1 year ago