In this action film, the acclaimed director sets the record straight on African-American participation in the Vietnam War, its legacy and its aftermath at home and abroad

Spike Lee's Vietnam War adventure Da 5 Bloods is perhaps the director's most ambitious demonstration of his love/hate relationship with the history of his country and the ways in which its cinematic output has reinforced misguided ideologies and factually selective portraits of white heroism.

It's a multilayered piece of positive cinematic revisionism that asks big, difficult and urgent questions about the history of African-Americans not only in US wars but, as always with Lee, in the context of broader US society now.

The film was conceived by scriptwriters Danny Bilson and Paul DeMeo as a modern-day Treasure of the Sierra Madre, a gold-hunting adventure set in present-day Vietnam and focused on a group of white former veterans. It was going to be directed by Oliver Stone. Stone pulled out of the project and it landed in the lap of Lee, who, together with writing collaborator Kevin Willmott, turned it into a far more intriguing, vital and necessary story about the indelible marks made by wars on those who fight them.

It's also a testament to the thankless, underrepresented history of African-Americans who have fought in their country's wars for little reward, recognition or material change to their status as second-class citizens — their lives as cheap in their homeland as they are on foreign battlefields. They made up 10% of the population of the US at the time, but accounted for a third of all troops who fought and died in Vietnam.

African-Americans made up 10% of the population of the US at the time, but accounted for a third of all troops who fought and died in Vietnam

The film begins with a montage of significant scenes from the archive from this, one of the first major television-saturated moments in the US's history. It's the period in which a teenage Lee watched as the Vietnam War was fought — a war that cleaved the hearts and minds of a nation swept by what appeared to be a wind of change. It turned out to be but a spark of hope that was snuffed out — though it kept smouldering, ripe for reignition.

We see Muhammad Ali, Malcolm X, Martin Luther King jnr, Kwame Ture and other black leaders speaking out against the war while protests against it surge, leading to the deaths of students at Kent State. President Lyndon B Johnson bows out of the race for a second term, making way for the rise of Nixon and Kissinger. Increasing complexities surround the war in Cambodia and Laos before its drawn-out conclusion and the end of one of the most shameful military misadventures in US history.

Lee places his audience and his characters in the history of that moment, while also reminding us that the more things seem to change, the more they stay the same — a depressingly true adage that's been at the heart of much of the director's work for over three decades.

From this point we arrive in present-day Ho Chi Minh City, with its US hotel chains, fast-food outlets and Apocalypse Now-themed disco nightclubs. Four former Vietnam vets reunite in a quest to put to rest some of the ghosts they left behind in Vietnam after the war and to fight the inner demons that were never properly addressed. 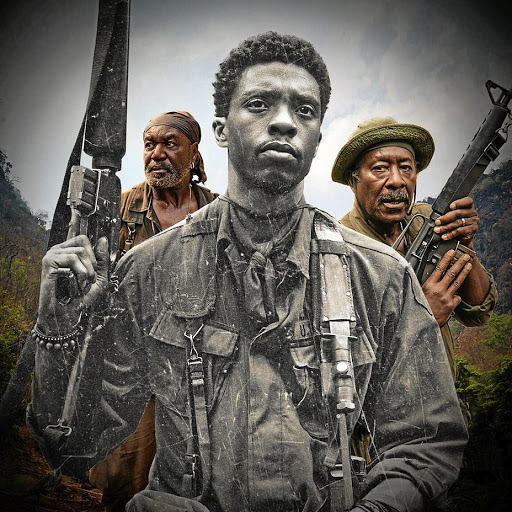 In the middle of the battle, the men had discovered a cache of CIA gold and had buried it, swearing to return to take it back to the US to fund the struggle of black activists against the ever-present threat of the Man.

As their journey proceeds, the group is joined by Paul's son David (Jonathan Majors) and Vietnamese tour guide Vinh (Johnny Trí Nguyen). Together they make their way upcountry on a river boat, accompanied by Wagner's Ride of the Valkyries — a slyly humorous homage by Lee to Francis Ford Coppola's Apocalypse Now.

They make their way through the jungle to the last known location of Norman and the treasure.

It quickly becomes clear that, though all the characters have a complex relationship with their experience of the war and the effect their return to Vietnam has on each of them, the film is essentially Paul's story. Suffering from PTSD and battling personal demons, he's the most troubled, complex and compelling of the group, and is brilliantly portrayed by Lindo in a performance that, in a normal year, would have Oscar written all over it.

The film intercuts between the treasure hunt and the characters' memories of their time in the war and their final battle with Norman. These scenes are filmed in grainy 16mm square television format and the actors appear as current rather than de-aged versions of themselves. This is a deliberate (and brilliant) move by Lee that explicitly enforces the blurred line between memory and the reality of past events.

The narrative is also disrupted by Lee's trademark historical interjections and breaking of the frame with still photos and archive footage to reinforce the broader political points about the whitewashing of black history. Both of these techniques serve not only to mark this out as a distinctively “Spike Lee joint”, but also to make visible the connections between the past and the present. The technique disrupts comfortable mainstream histories with the highlighting of lesser-known but equally important ones.

Leonie Wagner talks to the acclaimed director about family, racism and his latest film, which highlights the role of African-American soldiers in the ...
Lifestyle
1 year ago

By the time the adventure roars to its bullet-flying, fiery end, the experience has been singular, inventive and satisfyingly interrogative of not only what we think we know about the war in Vietnam but also the way in which it's been presented to us in popular culture.

Lee's final, dazzling bookend merges the escapist world of the film with the pressing realities of the real world of Black Lives Matter and the struggles against white supremacy in the US today.

Once again, as it did effectively in his Oscar-winning film BlacKkKlansman, it provides a fitting, rousing and emotional coda to one of the most provocative war films in the history of cinema.

It's a film that reminds us, as Lee recently told an interviewer for Sight & Sound Magazine, that “activism is activism. No matter when you were born, there's gonna be struggles, and in any era, hopefully, some people and some leaders will speak truth to power. It's the job of current activists to pass on what they've learnt to the next generation. Because a lot of times — and I include myself when I was younger in this — people will say: 'Oh you think you're the first one? No, motherfucker! We were doing this shit before you were born.' You gotta pass the legacy.”

• 'Da 5 Bloods' is available on Netflix.

In her latest action movie, the SA-born Oscar winner plays an immortal warrior doing battle to save humanity. She tells us more
Lifestyle
1 year ago

Here's why Chris Hemsworth was the obvious choice for 'Extraction', says director