Gary Carr, who plays one part of a thrupple in the eight-part British series, believes the show highlights that polyamorous relationships deserve respect 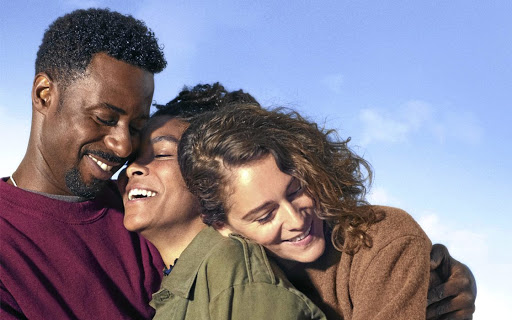 Kieran (Gary Carr), Emma (Thalissa Teixeira) and Ray (Ariane Labed) play three people in a relationship with one another in Trigonometry.
Image: Supplied

Polyamory used to be the kind of thing you only heard about during dinner table gossip about wayward hippy communes or the bedrooms of the one percent, but these days it's increasingly common among millennials renegotiating stodgy old rules about love and relationships. It's also the subject of the new eight-part British series Trigonometry - a touching romantic drama exploring polyamory through the eyes of three ordinary Londoners.

Written by Duncan Macmillan and Effie Woods, it's the story of paramedic Kieran (Gary Carr), his longtime partner, budding chef Emma (Thalissa Teixeira) and what happens when, in an effort to save some cash during difficult economic times, they take in a new roommate - the enigmatic and intriguing Ray (Ariane Labed). She soon becomes a bigger part of their lives than they imagined.

Carr was impressed when he was sent the script, he says. "I thought it was a great study of human beings but that it kept a beautiful, romantic, but also dramatic tone. It switches easily between weightiness and lightness."

The show centres on polyamory, but Carr says he feels it tells its story through relatable characters. "I was attracted to the character of Kieran because he's a selfless man. He has flaws but doesn't have any of that toxic masculinity stuff going on. He's sensitive, aware and cares about those around him. I found that endearing and brave."

The golden age of film-making is lovingly re-imagined in this Netflix series — and this time there's no homophobia, sexism and racism
Lifestyle
2 years ago

As Carr recalls: "We only had a week's rehearsal prior to shooting but there was a great sense of trust and we all knew that we had a mission to fulfil - we knew how demanding it would be of each other so there was a great deal of sensitivity. We felt like a team and that definitely carried on off set."

Carr says the show's success lies in its ability to show viewers who may have preconceptions about polyamory that it shouldn't be seen as something that's taboo. "It's not always about people experimenting or people who are lost and trying to find their way - it's a real thing, a legitimate relationship that deserves the respect that any other relationship does."

Carr also sees Trigonometry's willingness to tell a story about a subject that many have felt too taboo to explore on television screens before as a welcome addition to a television universe that's increasingly open to telling stories beyond traditional ideas of gender, race and sexuality.

He says he'd like to see as many stories in as many colours of the rainbow as possible with as many shades of meaning as possible so that we can keep learning and growing. "There are an endless amount of stories, narratives and people to represent. Art is a platform to express everything we want to say and to go as far as we can. It's positive and interesting to see different stories and have shows that we would never have thought possible before."

Carr hopes audiences will open themselves up to the world of the show. "I hope that watching it makes people feel good and takes them on a journey. The show is about people and characters and relationships. It's done in a lighthearted way overall - it's sweet and charming. I hope that people feel good watching it and feel brave about making certain decisions, not worrying about what other people think, led by love not fear."

• 'Trigonometry' is available on Showmax.

Not all African stories have to be about warlords, suffering and poverty, says the director of this film about a pair of ordinary people finding love ...
Lifestyle
2 years ago

Director Melina Matsoukas and writer Lena Waithe provide insight into the film that critics are calling 'Bonnie and Clyde for the Black Lives Matter ...
Lifestyle
2 years ago

Thank heavens for streaming services, which have a plethora of options to keep everyone entertained and distracted
Lifestyle
2 years ago