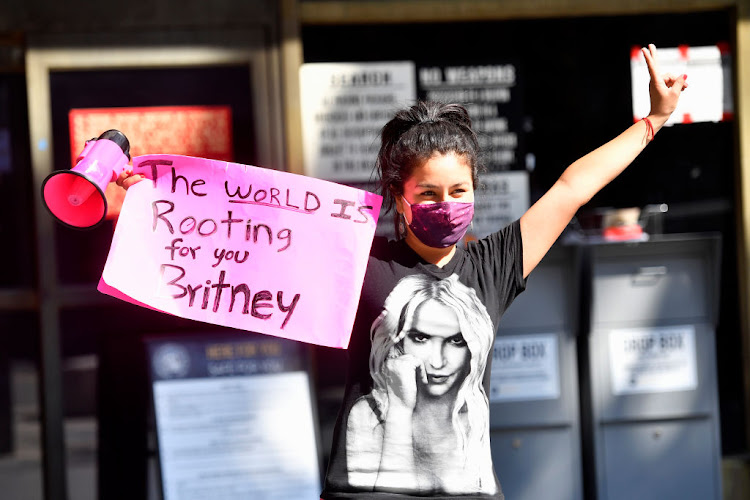 A supporter of US singer Britney Spears gathers with others outside a courthouse for a #FreeBritney protest as a hearing regarding Spears' conservatorship takes place on July 22 2020 in Los Angeles, California.
Image: Frazer Harrison/Getty Images

As US singer Britney Spears' conservatorship case returns to the spotlight, many fans have revived their calls for the pop star to be given back control of her life under the #FreeBritney movement on social media.

The pop princess been under conservatorship since her 2008 public meltdown when a court granted her father, Jamie Spears, and her attorney the power to manage all of her business and personal affairs as she was not deemed competent to do so.

Both parties stepped down from their roles last year, leading to the appointment of Jodi Montgomery, who has been serving as the star's care manager since 2018, as their replacement. Montgomery will remain in the position until next month.

According to The Blast, Spears was due to make a virtual appearance at a hearing reviewing the conservatorship on Wednesday but was unable to.

Furthermore, her father successfully petitioned the LA County Court to keep future proceedings out of the public eye.

#FreeBritney supporters, meanwhile, were present outside the courthouse, protesting against the conservatorship and demanding the star's freedom.

Their calls have also been carried on social media, under the #FreeBritney and #BritneyArmy hashtags, as well in the form of a fan-led petition asking the US Congress to intervene on her behalf.

Many have questioned why she's still under conservatorship, even though she appears to have her life back on track.

Beliebers let’s support #FreeBritney @britneyspears deserves to live her life be free to be happy and as an independent woman 💯💜 pic.twitter.com/PRe0w9xfXW

WHAT HAVE SPEARS AND HER FAMILY SAID ABOUT THIS?

While many fans have speculated on and attempted to dissect the singer's various posts on social media, the singer only spoke out on the matter once in 2019, assuring fans that she was OK and imploring them not to believe everything they read and hear.

This came after the #FreeBritney movement first kicked off after claims that the singer was being held against her will.

I wanted to say hi, because things that are being said have just gotten out of control!!! Wow!!! There’s rumors, death threats to my family and my team, and just so many things crazy things being said. I am trying to take a moment for myself, but everything that’s happening is just making it harder for me. Don’t believe everything you read and hear. These fake emails everywhere were crafted by Sam Lutfi years ago... I did not write them. He was pretending to be me and communicating with my team with a fake email address. My situation is unique, but I promise I’m doing what’s best at this moment 🌸🌸🌸 You may not know this about me, but I am strong, and stand up for what I want! Your love and dedication is amazing, but what I need right now is a little bit of privacy to deal with all the hard things that life is throwing my way. If you could do that, I would be forever grateful. Love you ❤️❤️❤️

Her sister, Jamie Lynn Spears, meanwhile, has been more vocal on the matter, hitting back at comments claiming that her family wasn't speaking out on Spears' mental health, according to various reports.

Spears' conservatorship case is back in court on August 22, when it will up for extension again.

According to reports, Spears' mother, Lynne Spears, has also filed a request to be included in her conservatorship.