A radical, vocal, feminist man is harnessing the power of social media to stop these women from becoming nameless statistics, writes Alexandra Phillips 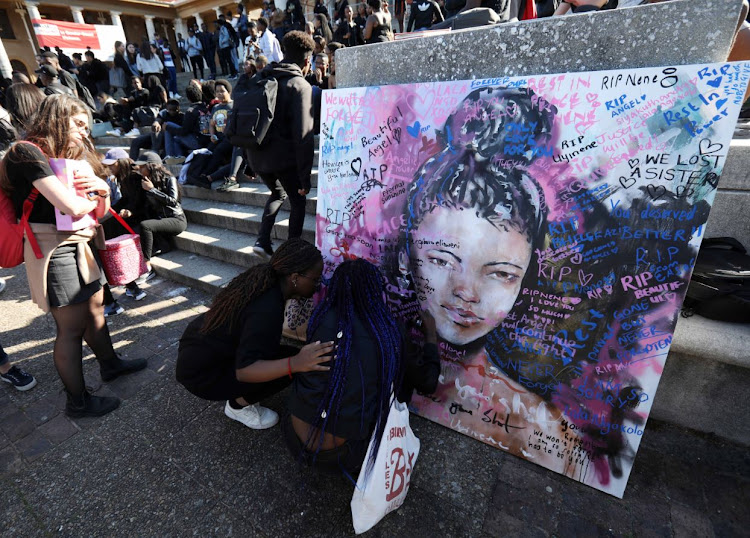 On September 6 2019, a post. The words "South African women fight back," around a Black Power fist. They are a war cry. They are an instruction. Below, the caption reads "Keep fighting back #keeptheenergy." What followed is almost a year's worth of near-daily tributes to the victims of Gender-Based Violence in SA.

The Instagram account adopted the slogan Keep The Energy as its name, and today serves as the only almost-daily reminder of some of the harsh realities of being a woman in SA.

Throughout that September, "keep the energy" reverberated from women's mouths and loudspeakers as we marched to parliament, on campus, at vigils for Uyinene Mrwetyana and finally, at her memorial.

However, it was with the formation of this Instagram account that the phrase became a slogan for SA's youth-led movement against gender-based violence. It's a way of life for those aligned with the movement. In this fight, there's no space for fatigue.

I was surprised when I called the person behind the Keep The Energy account and found a man. This fight is left to women so often that my mind had been trained to expect a radical, intersectional, vocal, feminist woman. Van Niekerk is all these things but one. I asked him about this, and about what he believes men should do about fighting gender-based violence in SA. His short answer is: "Whatever they can."

Van Niekerk, a 21-year-old University of Cape Town English and media student from Bellville, is not one for easy aphorisms, and he does not claim to have all the answers. But one thing he is sure of is that honouring the victims of gender-based violence, preventing them from becoming nameless statistics and personalising their stories so that they "hit home", is important work.

Protesters dressed in black held up signs as victims of sexual abuse spoke openly about their experiences.
News
2 years ago

He remembers reading the news of Mrwetyana's death in a Monday morning lecture. I do too. He left campus early that day, a lot of us did. And that evening, his social media feeds were inundated with anger, upset and heartbreak. He believed in that moment that "this must not die down in a week's time".

Rest in power Phumeza 💜 Phumeza Pepeta, a 45 year old woman from East London, Eastern Cape, was shot dead by her ex-husband at her father's funeral in Nelson Mandela Bay on the 26th of July. Phumeza has had a restraining order against her ex-husband, Xolani Mkhayi, since 2018. Mkhayi wore a dress, wig and heels to disguise himself at the funeral. Funeral goers realised it was him after Phumeza's 21 year old son punched him and the wig fell off. Rest in power our sister. We will never forget you ✊🏽💜 #KeepTheEnergy #notogenderbasedviolence

In September of 2019, his was not the only Instagram page posting tributes to the daily victims of gender-based violence in SA. Today, his is the sole platform dedicated to them.

The work can be harrowing. Van Niekerk always has one eye on the news and the other on the Instagram page, where he receives direct messages from teenagers detailing their sexual assaults and rapes, asking for guidance, help and most often, justice. He knows that justice is not his to give, but I have to wonder why young girls in SA see more hope in an Instagram page than in our courts.

I asked him how he copes with these violent, always devastating stories of lives taken at the hands of men, when everyone else has the option to scroll past. He says he's not sure how. He's always been passionate about women's justice and finds the work rewarding, particularly when stories he shares on the account garner attention. But it "hits heavy," and sometimes he has to take a break.

At the beginning of SA's Covid-19 lockdown, the account had 10,000 followers. But in recent weeks, that number jumped to 60,000 (85% are women). This is for the same reason that President Cyril Ramaphosa felt he should address gender-based violence alongside a Covid-19 update a few weeks ago: the numbers are rising.

For a lot of people, it's hard not to feel despondent. We've seen the president speak on this issue a lot. Last year, he addressed the movement directly, outside parliament, the day after thousands marched on the Cape Town International Convention Centre, where he was attending the World Economic Forum on Africa, to summon him.

Rest in power Lesedi 💜 Lesedi Mokgosi, a 25 year old teacher from Magong, Rustenburg, North West, was raped and murdered on the 29th of June. Lesedi was found with her hands and feet tied and was strangled to death. An arrest has been made. Rest in power our sister. We will never forget you ✊🏽💜 #KeepTheEnergy #notogenderbasedviolence

I asked Van Niekerk what he thinks about the leadership's response to SA's gender-based violence statistics. We're fourth in the world for femicide, 110 rapes are reported every day and there are 56 daily murders. He said that last year's response was "expected". I agreed.

We also agreed that our president's words were encouraging. But since September last year, it's "been the same". Why are SA's women not prioritised? Van Niekerk didn't know. Neither do I. I think this is the question feminist activists have been asking since time immemorial.

So, Van Niekerk, per his own advice, did what he could. He saw a gap, and decided to fill it with the names and pictures of those lost to gender-based violence in SA. The Keep The Energy account is a daily reminder that the fight is not won, and that we must #KeepTheEnergy.

HELP IS AT HAND

Not just pretty photos: the UGLY truth behind the #ChallengeAccepted hashtag

Women in Turkey have been protesting against the rising femicide cases in the country.
Lifestyle
2 years ago

Zozibini Tunzi said a shift is necessary to improve the lives of women who are vulnerable to abuse.
Lifestyle
2 years ago

R1.6bn fund to fight GBV but some women’s NGOs haven’t seen a cent

Civil society organisations such as People Opposing Women Abuse (POWA) and Masimanyane Women’s Rights International say they have yet to receive any ...
News
2 years ago