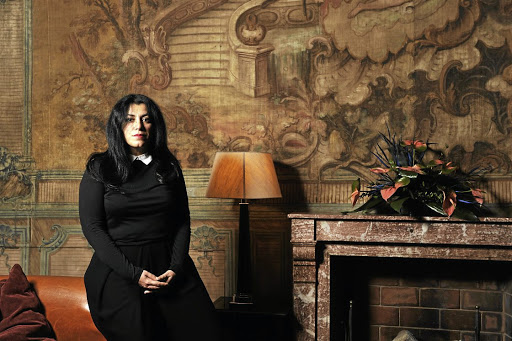 Marjane Satrapi may not be a household name just yet, but she makes an indelible impression. She grew up in Iran and was homeless in Vienna for a period, when her parents sent her there to finish school at the age of 14. Now she's directed the critically acclaimed film Radioactive. It stars Rosamund Pike as Marie Curie, who pioneered research on radioactivity.

Satrapi spoke to me from her home in France about directing in a male-dominated industry. "People see me, a woman and minority, and they expect me to have this soft voice and be sweet."

She pushes her shock of black hair away from her face, her red lipstick the only artifice on her otherwise un-made-up face.

"I'll only be on this earth for another 30 years, not 300, so I don't want to waste time making people feel nice. I say things directly. People may not know how to take it initially but when I compliment them, they know it's because their work is good. I don't need everyone to like me."

Amanda Peet has no sympathy for her 'Dirty John' character, Betty Broderick

At the heart of the second season of this hit true crime series is a cautionary tale that every married woman should heed, writes Margaret Gardiner
Lifestyle
9 months ago

She says her father would tell her: "If a human being can do it, it's humanly possible and that means you can do it."

So it's no wonder that Radioactive isn't a traditional biopic — it shows Curie warts and all, and considers the good resulting from her discoveries, such as advancements in cancer treatment, as well as the bad, the nuclear bomb. Curie also famously had an affair with a married man, though Satrapi is dismissive of that scandal.

"French literature is filled with affairs and mistresses. The French didn't need this Polish scientist to teach them how to have a mistress."

Satrapi's earlier work, the critically acclaimed Persepolis (2007), is a semi-autobiographical, animated film about an Iranian girl who witnesses the fundamentalist takeover of her country and rebels against its strict policies, especially regarding women.

She says she's often had to endure the malice of people affronted by her refusal to constrain her intelligence or accept the status quo. Like many women who disagree with outdated mores, she's been asked if the reason for her outspokenness is because she is having her period.

"It's shocking," she says. "The problem isn't hormonal. I don't talk about your testicles. Maybe you have a problem with your testicles? I don't go there, so don't you. It's a private domain."

Satrapi also addresses her other bugbear: "The number of times people have told me to stop 'being emotional'.

She adds that when she starts a new project, she often hears (and here she makes her voice manly and rubs her hands together), "'This is the first time I'm working with a female director.' I tell them, 'It's going to be exactly the same [as working with a male director]. I'm not going to direct you with my boobs. I am going to direct you with my voice and my brain. Nothing matters from my chin down. Don't even think about it."

Women should also not play that game, she adds, of buying into the stereotypes. "Instead of trying to make it with a smile ... I'm going to say, 'This is my right, and I'm not going away until you give it to me.'"

Satrapi says she hopes movements such as #MeToo, #TimesUp and #BLM will bring about real change, but admits that they have to start within us, with education.

"More women have to dare to become the director or director of photography," she says. "If we're not present in numbers, it is impossible to achieve what we want."

I learnt a lot by making financial mistakes with Goop, admits Gwyneth Paltrow

Margaret Gardiner chats to the Oscar-winner about her lifestyle empire, latest role and THAT Golden Globes dress
Lifestyle
10 months ago

It's not enough that I'm the only one, says Cynthia Erivo of her Oscar nod

'The Morning Show' has been a great outlet for my anger: Jennifer Aniston

The A-lister seems energised since taking on her first recurring role since 'Friends', writes Margaret Gardiner
Lifestyle
1 year ago