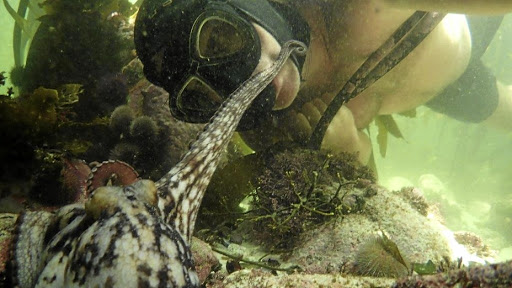 The kiss that started it all: Conservationist Craig Foster and his co-star in 'My Octopus Teacher'.
Image: Craig Loubser

When she reaches out a tentacle to touch the mouth of conservationist and kelp forest diver Craig Foster, the wild octopus's gesture looks like a caress. It's a visible demonstration of an invisible bond between the pair, which is flawlessly captured in the original Netflix nature film My Octopus Teacher.

This common octopus is anything but. She takes a chance on the human invading her realm - dubbed the "Great African Kelp Forest" by Foster and conservationists in the Sea Change Project NGO - allowing him to witness the routines of her daily life, from hunting to being hunted, and ultimately mating.

They develop a unique relationship over a year, during which time Foster dives virtually every day, hoping to track and commune with this curious octopus, while recording previously unobserved behaviour over her lifetime. (He's been diving daily now for nearly 10 years.)

In all her gorgeous guises she is the true star, though silent, of this film and she gets a grip not only on Foster's hand, with her thousands of suckers, but also on his heart.

"All I could do was think of her. I became a bit obsessed," he admits of his relationship with this animal, whose intelligence is compared to that of a primate, cat or dog.

But this is no domestic relationship. She is free and wild. Foster must earn his mentor's trust, which he initially does by entering her world differently to the way most people would: he slides in gently while holding his breath, no scuba tank making noisy bubbles.

He wears no wetsuit despite the icy, even life-threatening cold of the Atlantic Ocean during his daily immersions in this underwater paradise, which he draws out, like a treasure map. He also tracks the way his body adapts to the extreme cold and its energising impact. 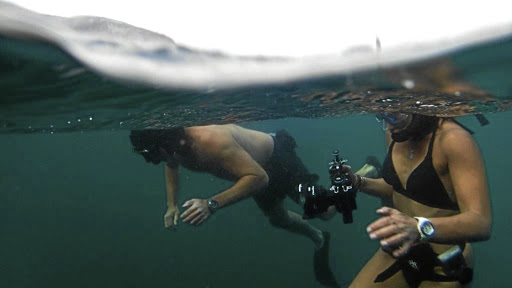 The filmmakers dive in the freezing Atlantic without wetsuits.
Image: Fain Loubser

The cinematography of this wondrous underwater universe is breathtaking because the divers behind the cameras - producer Foster and director Pippa Ehrlich, who also dives without a wetsuit - know it better than anyone else alive.

Foster describes his descent into this 3-D forest, which has old growth, algae, and misty haunts, as "feeling like he's flying on another planet … it's extremely exotic".

"It's more extreme than the maddest sci-fi," Foster observes of the strange shapes and creatures he encounters.

For this spectacular glimpse into an alien world, the filmmakers deserve all the nominations and awards they've won for the thousands of hours spent underwater.

They recently won the Best Feature at Earth X and have garnered eight nominations for the Jackson Wild Media Awards, two for another nature film competition and two for the Pandas. And the accolades keep flowing.

Back on land, co-director James Reed shapes the film's narrative around Foster's life by interviewing him in his home filled with shells, driftwood and photos, and the sound of the waves.

He unravels Foster's trajectory - from being a burned-out film maker, to making a "radical change" and discovering a renewed zest for life every time he steps into the sea. This provides a backbone for the film.

As Foster's relationship with this octopus deepens, he says: "I felt very vulnerable, as if what happened to her, happened to me." Despite this, he refrains as much as he can from interfering in the natural rhythms of the kelp forest.

When talking about his re-awakening both to life and to his son Tom, Foster doesn't dwell on how remarkable his lifestyle has become. After all, he spends his days diving with sharks and whales. He also goes in at night because octopuses are supposed to be nocturnal.

In a world first, filmmaker and naturalist Craig Foster spent years doing daily dives off the Cape coast to document the secret life of an octopus ...
Lifestyle
3 years ago

Instead, he zooms in on the "absolutely mind-blowing" marine life he meets in this magnificent and biodiverse ecosystem.

My Octopus Teacher is a collaboration between Sea Change Project (which Foster cofounded), Off the Fence Productions based in the Netherlands, and Netflix - and it is the "first Netflix original documentary" from SA.

Natural history filmmaker and environmental journalist Ehrlich notes: "We started this project to share our experiences of the sea forest and our love for the natural world."

They hope it will help to protect this precious kelp forest, which is largely undamaged, and to further the global campaign to protect 30% of our oceans by 2030.

"The privilege of capturing Craig's relationship with the octopus has been a deeply fulfilling experience. It's allowed me to imagine the world through another species' eyes, which expands one's perspective," says Ehrlich. 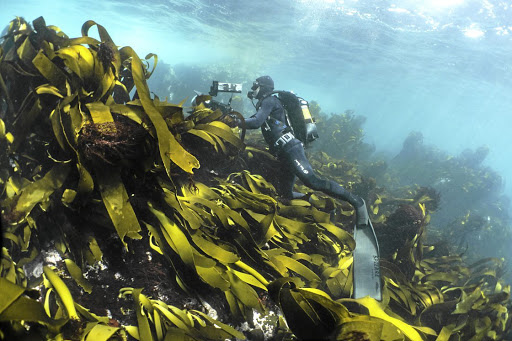 I was lucky enough to dive into the forest with Foster, Ehrlich and two others not long ago. On that calm and shallow dive, Foster pointed out an octopus on the sea bed and we followed it, drifting easily along, until I froze and hauled myself onto a sun-warmed rock to thaw.

Foster still dives most days but recently he's had a like-minded community of marine scientists and conservationists accompanying him … and his son Tom, who he describes as a young marine biologist.

"Tom has a gentleness from spending thousands of hours in nature," he says.

Clearly he wishes all people could share a similar way of being.

• 'My Octopus Teacher' launches on Netflix SA on September 7.

Praying mantises may be the poster girls for literal 'man eaters', but there are plenty of other examples too
Lifestyle
1 year ago

'They are killing our jobs': Minister urged to act against shark fishing

The outcry after four bronze whaler sharks were slaughtered in front of tourists has shone a light on the murky waters of shark hunting and the ...
Opinion & Analysis
1 year ago