Why Joburgers are obsessed with jacarandas

Pretoria may be known as the Jacaranda City, but Egoli gives it a run for its money come October, say these Sunday Times Lifestyle writers 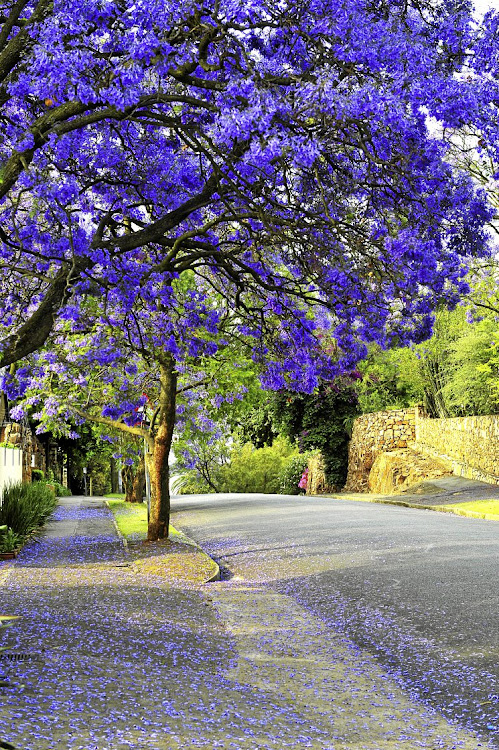 "Jacaranda season": two words that have traversed provinces - and Instagram captions - to such an extent that they're no longer confined to the argot of the denizens of the highveld. And this expat Capetonian can attest to their allure.

"Yoh, but Joburg's looking lush, hey!" I've exclaimed more than once in the past few weeks, from the summit (ha) of Melville Koppies or the balcony of my third-floor flat, which offers a kiff view of the largest urban jungle in the world, courtesy of modern Homo sapiens' efforts to greenify Egoli.

Come mid-October, the malachite hue of Joburg's boscage is interspersed with purple-petalled trees, transforming a gritty, austere city into a pulchritudinous metropolis - which is to say, jacarandas are kak mooi.

The serotonin-inducing nature of being met with a panorama that features these colourful arboreal creations can be equated to waking up to a non-windy day in the Mother City keDezemba. Neither endemic to SA nor as prominent in stature as Table Mountain, these trees remain a valuable reminder of the psychological benefits we reap from the natural world.

When I was at varsity, the jacaranda trees were horrendous harbingers of death by studying. The myth was: if the jacarandas are in bloom and you haven't yet cracked a book, you are seriously doomed; there is no hope of passing the exams. I kept a suspiciously close eye on the majestic trees. There were a few planted in a semi-circle just outside my library of choice, seemingly as a sinister reminder to us poor stressed students. Tick tock. Tick tock. Watching. Waiting.

But when they bloomed and you had actually studied, it was a beautiful sight. Wits University was transformed into a purple haze of glory. We study buddies would gather under the branches for a snack break, sitting in the shade, nattering away, dreaming of the long summer holiday ahead. I miss those holidays. I miss those dreams.

The Highveld has finally got drenching summer rain, seeing Joburg and Pretoria turn gloriously purple as their jacaranda trees come into bloom. As ...
Lifestyle
2 years ago

Now, funnily enough, I live on Jacaranda Street, a very short road with, outside nearly every house, a jacaranda tree. Come blooming season, I smile, not stressed about studying but looking forward to when my street becomes a nostalgic reminder of the good old days and a monument of how beautiful Joburg can be. Hayfever be damned, these trees will always have a place in my heart.

First comes the flying carpet of violet over the suburbs, then come the summer afternoon thunder storms known in October in Joburg as "purple rain", when the carpet falls to earth, blanketing the roads in a thick, sweet nectar.

Seen from the bird's-eye view of a small airplane, the intense purple grid of pompoms look like sweet wrappers, enveloping houses and lush gardens. But from below the gnarly branches reach out to touch each other across the road like the arms of ancient ladies dripping with amethyst jewellery to form an enchanted canopy, an enormous indigo umbrella.

The best part of jacaranda season is after the rain, when the sky is still grey and you roll down the car window and drive over the fallen petals and they make a loud popping sound that's as strangely appealing as stamping on bubble wrap. For a few days the air is sickly sweet with the decaying bodies of the little flowers and then, like a wafting purple mist, they're gone.

Johannesburg is often falsely accused of ugliness. This might be because nobody in their right mind has ever come to Joburg for the nature.
Lifestyle
1 year ago

I love jacarandas - I love the way they carpet the skies for a few weeks every year; I love that they're harbingers of summer and of impending exams. My first bee sting was because I sat down on a jacaranda blossom with a hidden inhabitant. A girl in the grade above me had to remove the sting from my bum, in full view of the rest of the playground. It was humiliating, but, in retrospect, funny.

We're proud of our jacarandas, but like so many of Joburg's most treasured arboreal specimens, they're not of us. They were imported from Argentina in the 19th century and planted to line the streets of Johannesburg and Pretoria.

Pretoria is home to the comparatively rare white jacaranda bloom - to most of our minds, they're purple, a lavender snow that carpets our lawns when the wind blows and it rains.

It's no longer permissible to plant jacaranda trees in SA. They consume a great deal of water, take up a great deal of space, and are not environmentally benign. But for so many South Africans, they're a quintessential aspect of the local scenery, and a testament to how attached we become to seasonal omens.

Bloomin' beautiful: Cape wildflowers are back after seven years of drought

The provincial borders have opened in the nick of time, so rush to see the flowers of Namaqualand and the Western Cape before they're gone, urges ...
Lifestyle
10 months ago

In 2014, this Houghton nature reserve was overgrown and near-abandoned. Then artist James Delaney got a dog that needed walking and decided to ...
Lifestyle
1 year ago