'City Deep': Kentridge's films are the art world's answer to a blockbuster franchise

After a nine-year hiatus, artist William Kentridge has released the 11th instalment in his 'Drawings for Projection' series 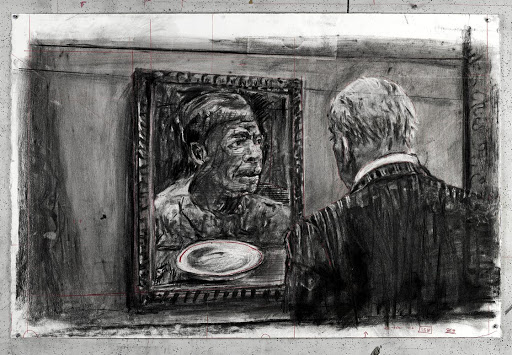 Sometime in the late 1980s, artist William Kentridge had a dream. In it, as he'd describe it many years later in a conversation in Paris with author Denis Hirson, Kentridge saw an image of a group photograph of people in front of a building.

"The dream had a completely non sequitur nonsense set of ideas and the photograph had a caption, which is what I woke up with, remembering it and writing it down in the notebook next to the bed, then making a drawing that day before I started on the film. The caption as far as I remember was something like, 'Soho Eckstein and a group of 150 artists outside his EMI headquarters who have spent 10 hours recording Johannesburg, 2nd Greatest City After Paris'."

The characters of Soho Eckstein - Johannesburg mining tycoon - and his alter-ego Felix Teitelbaum - liberal, conflicted white Johannesburg artist, were the main protagonists of the first of what's now known as the Drawings for Projection series.

They appeared in their inaugural animated film, Johannesburg, 2nd Greatest City After Paris, in 1989. Since then the series has gone on to comprise 11 films, with Eckstein as their main character - Teitelbaum having gone into exile in 1994.

The films have offered a complicated series of contemplations of many of the major issues facing SA over the past 30 years, while also affording more personal, psychological examinations of Eckstein's changing fortunes. They have become the closest thing the art world has to a blockbuster franchise with their own dedicated legion of devotees.

This was capitalised on by the Goodman Gallery, which held an online retrospective of the entire Drawings for Projections series last month, ahead of the release of the new film.

William Kentridge's 'The Head & the Load' comes home to Africa

After playing to sold-out audiences across the world, this critically acclaimed theatrical work hits the Joburg Theatre in May
Lifestyle
1 year ago

Kentridge's work has long since broadened into other multidisciplinary works - including his World War 1 piece The Head and the Load, which had its May premiere postponed until September 2021, due to Covid-19. But the adventures and contemplations of Eckstein still occupy a seminal and sentimental place within his oeuvre and ignite eager anticipation in audiences hungry to know what the main character, his city, his country and his creator are up to now.

After a nine-year hiatus, Eckstein returns in Kentridge's latest animated creation, City Deep, to once again offer himself as a fictional barometer of the constantly imploding landscape and reconfigured social and economic relationships of Johannesburg's haves and have nots.

The nine-and-a-half minute animation juxtaposes Eckstein's trip to the Johannesburg Art Gallery (JAG) of his memory with the patient chipping away of the city's informal and illegal Zama Zama miners in the remnants of the gold mines that Eckstein once oversaw on the highveld.

The world of formal mining and its effect on the shaping of the social and economic fabric of SA and the economic inequalities that fed it were the subject of Eckstein's third outing, Mine, in 1991. City Deep may have some roots in that earlier film but its lens is focused differently and its mood is more sombre and ominous. 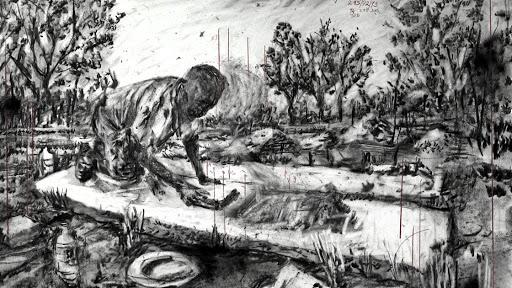 The film offers an allegory of the relationship between the informal and formal sectors in the economy of SA's most capitalist-driven city and their inevitably destructive confrontation, which, like so many of the Soho films, is rendered through a rumbling, earth-shuddering implosion that smashes the barriers between nostalgic historical memory and lived present reality. It's simultaneously surreal and embedded in the familiarities of the landscape of the life and shared memories of generations of Johannesburg's residents.

The current Covid-19 moment, in which the glaring inequalities between South Africans have been forced into sharp relief, coupled with recent news stories about the threat of Zama Zama miners (and their methods) to the geological foundations of the city, work to the piece's advantage, imbuing it with a gripping relevance.

It's also more broadly, beyond its specific Johannesburg attractions and connections, a work that asks us to consider difficult questions about the depressing realities and contradictions of the late capitalist era.

Eckstein, the retired mining magnate, finds himself taking a trip down memory lane in the Lutyens building of the JAG, itself a physical manifestation of a colonial Empire dream. It was willed into existence almost single-handedly by Lady Florence Phillips, the wife of Randlord Lionel Phillips, and serves as a fitting representation of the ways in which the riches beneath the ground of the Witwatersrand were used to construct a fantasy projection of Western high culture and sophistication above ground, here in the outer reaches of the colonies. It may be faced with its own specific new challenges but here it's represented not quite as the JAG of now but rather as the JAG of Kentridge and Eckstein's memories of it.

As Eckstein stands in the gallery he examines a portrait of a black man with a piercing stare; a still life in which the fruit is gradually eaten by flies; and, beneath the glass of a display case, a billboard on which phrases are beamed - perhaps from his own subconscious, perhaps from the zeitgeist of the greater world beyond: "You will be robbed of speech . You will be dreamt by a jackal ... Wait for better gods ... Wait for better people ... Tie every guilt around your ankle."

The ominous, mournful chanted drone of composer Nhlanhla Mahlangu's soundtrack reinforces a sense of portent, of something inevitable and terrible on its way - complemented by the patient tapping of the Zama Zamas as they work away at the remnants of Eckstein's mining empire, looking for what small rewards they can eke out, their basic methods echoing those that were used to extract minerals during the pre-colonial era. That tapping is almost like a bell tolling, not just for Eckstein but for the system and the history he represents.

There are few moments of black humour or lightness here. Instead, there's a tightening sense of melancholy that envelops Eckstein as he moves towards his final confrontation with his past and the undeniable reality that, as Kentridge told Hirson, "The separation of lived experience ... is still enormous in South Africa."

Whether or not we'll see Soho Eckstein again remains to be seen, but you always have to hope that as long as Kentridge is here in the 2nd greatest city after Paris, producing his work for audiences across the globe, there's hopefully space for one last return to the character he first dreamt of over 30 years ago.

Until then there's plenty to keep looking at and thinking about in this intellectually challenging, visually captivating episode in the series that continues to stand as the great imaginative chronicle of the South African psyche.

• 'City Deep' is showing at the Goodman Gallery. Visit goodman-gallery.com

Works by five women from the Global South speak to each other in surprising ways in Jozi's newest art space, The Joburg Contemporary Art Foundation
Lifestyle
6 months ago

A portrait of a light-skinned black woman painted as a dark-skinned woman has been met with mixed reactions.
Lifestyle
8 months ago

The watercolour artist shares the inspiration behind the whimsical artworks in her latest exhibition, 'Tree Dreams'
Lifestyle
6 months ago
Next Article