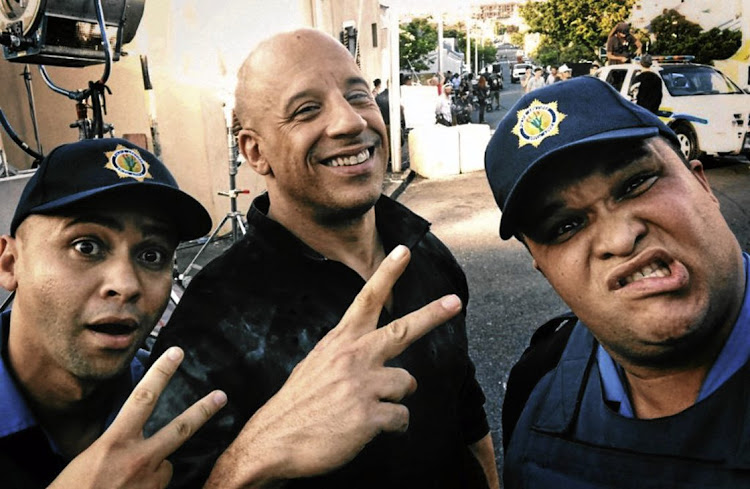 Donovan Goliath, left, and Jason Goliath, right, with Vin Diesel during the filming of ‘Bloodshot’ in Cape Town.
Image: Instagram

In the video, the Fast & Furious star can be seen busting a move to Fassie's 1997 hit, along with Nigerian dancer Nifé.

“SA vibes with my Nigerian sister @itsjustnifee - back story on my IG”, he captioned the video.

SA vibes with my Nigerian sister @itsjustnifee Back story on my IG!...

On Instagram, the actor explained why he loved the song and the back story for the video.

Diesel said he was inspired by a birthday his mother celebrated in SA two years ago while he was shooting the film Bloodshot in the country.

“It was my mother’s birthday a couple of days ago and I reflected about a birthday she had in South Africa two years ago while I was filming Bloodshot. I had preparations for her birthday dinner. We were supposed to leave at 9pm and we had to film until 3am.

“I was walking on set feeling bummed, the whole crew blasted this song and it lifted my spirits through the roof,” said Diesel.

WATCH | 'When Jerusalema gets in, all measures go out': Kenyan minister urges youth to social distance

Fast and Farcical: Having a laugh at Hollywood's street racing movie franchise

From questionable wardrobe choices to absurd stunts and suspiciously sculpted physiques, the Fast & Furious films ain't fooling nobody - not even ...
Motoring
1 year ago

The film is going ahead and all involved are looking forward to its release late next year or early 2021.
TshisaLIVE
2 years ago