Even traffic cops forget their duties when they stop the co-creator of Mzansi's hit soapies, 'The River' and 'Legacy' 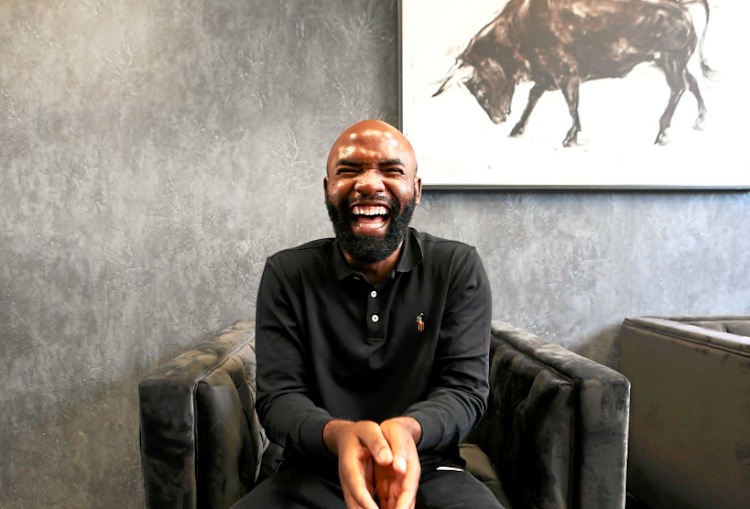 Phathutshedzo Makwarela swivels in the chair behind the mahogany desk in the corner office usually occupied by the CEO of Legacy Investments.

Of course it’s all fake. Legacy is no more real than Santa Claus is the living, breathing global dispenser of Christmas presents. Rather, it’s the fictional company from which the telenovela written and produced by Makwarela and longtime collaborator Gwydion Beynon takes its name.

He leans back and asks a producer for water. Once he starts talking about his passion for storytelling his eyes light up and he smiles broadly, leaning forward and gesturing.

The characters of his latest soapie spend most of their time on the 17th floor of this Sandton building overlooking Africa’s richest square mile. This time of the year it’s coloured by purple jacaranda blossoms.

Phathu, as most people refer to him, is seldom on set and has yet to move into his own office at Tshedza Pictures, the production company he co-owns with Beynon.

Speaking about the creative process, Makwarela is emphatic on one point. Sorry, fans, certain characters have to die. He is unapologetic about his role in the deaths of some of SA’s most-loved characters. There’s a glimmer in his eye, he smiles mischievously and his voice rises an octave as he laughs and says “nobody is safe”.

“South African audiences are so fatigued with watching soapies where characters are there for 20 years and then the only time a character dies is when they have a fight with the producer. What’s nice for us, what we brought is that nobody is safe.”

Makwarela and Beynon are also the creators of The River, the award-winning series set in Pretoria about two families from different backgrounds who are brought together and divided by the discovery of a diamond in Cullinan.

Behind its stained-glass doors, the set of Legacy looks like any corporate office, except there is no receptionist, only people in headsets weaving between lighting equipment and cameras. Some of the empty offices have been turned into dressing rooms. Makwarela describes being on set as “weird”; it feels surreal that a world dreamt up in his and Beynon’s imaginations has been brought to life.

“There’s something in watching episode 1 with the audience, it’s like gambling, it’s like that kind of rush. People respond and they get it and they’re excited and they’re thrilled,” he says.

He wants not only to entertain viewers but to frustrate them as well. “My barometer is that if your show goes on air and no-one is pissed and no-one is annoyed, then it means they are not emotionally invested,” he says.

Makwarela is confident that he knows what black viewers want. “I can write black characters; because I’m black it’s my lived reality, it’s my core existence … It would be difficult for me if I were to go and write a Jewish character, it’s not my lived experience.

“I might miss certain nuances and certain beats and I think that is really the key, the investment in knowing who you are talking to and respecting them and understanding what their fears are, their anxieties, what is troubling them.”

Makwarela grew up in Mamvuka, a village in Limpopo, and vividly remembers watching a television set powered by a generator because his village wasn’t on the Eskom grid. Before falling in love with television stories, Makwarela loved the written word. His father was a headmaster and his mother, who ran a crèche, was also a teacher, so the home was filled with books.

From the Cape Flats to the director’s chair, music has held deep meaning for Liesl Tommy, the woman behind the upcoming film, 'Respect'
Lifestyle
1 year ago

He grew up reading Bessie Head’s novels, and was particularly struck by Petals of Blood by Ngugi wa Thiong’o.

Before he could read English he would have to beg his older brother to read a book and then tell him the story; a strategy that depended on his brother’s mood.

It was scriptwriter-director Anthony Thobejane’s Sepedi drama series Bophelo ke Semphekgo that sparked his initial passion for television. Later it was fuelled by Generations, which he hails as a cultural phenomenon — no discussion of South African television is complete without paying tribute to the impact the series had on black viewers, he says.

“You are in a village, there is nothing, those dramas were the thing you looked forward to for the next week. I think Bophelo ke Semphekgo defined television for some of us. That and the original Generations did something to all of our psyches that was so powerful and poetic and amazing.

“I really hope Mfundi gets the flowers when he can still smell them,” he says, referring to producer Mfundi Vundla, who created the original series. The most-viewed soapie in SA with more than 7-million viewers, it ran from 1993 to 2014.

In his matric year Makwarela told his parents he wanted to study film-making at the Tshwane University of Technology.

“My dad had me set on an engineering path; I had to tell him that I wanted to do this thing called motion picture production. That was the time when every kid in Limpopo was doing engineering. Every parent’s pride and joy was being able to say, ‘My child is doing engineering’. “That was the trend and here I was telling my father about this career he has never heard of. But I was lucky enough that he agreed,” he says.

My dad had me set on an engineering path; I had to tell him that I wanted to do this thing called motion picture production

The next hurdle was convincing “the old guard” that television could be better and that a young black creative could be head writer of a show.

Makwarela says he and Beynon, who met while working on Muvhango in the early 2000s, are from very different worlds.

“He’s from Parkhurst, he grew up watching Star Wars, I had never watched Star Wars. The only ‘star’ thing was Star Trek on SABC on Sunday night and I didn’t like it because they had those funny costumes.”

On Sunday Makwarela was named “most stylish media personality” at the SA Style Awards.

Recently he was in a butchery when someone stopped him and asked for a picture. Makwarela finds this kind of thing “uncomfortable”, but says he’s come to understand that it shows a genuine appreciation of his work.

Some traffic officers are also big fans. “[They] watch my shows all the time. I had no idea. They will stop me… what usually happens is they’ll ask for my licence. They’ll look at the name and look at me. Then they do that 10 seconds of ‘do I ask him?’ and usually they start to laugh, you can see they want to ask, then I say ‘yes’.

Whenever Makwarela drives on the N4 past Diepsloot and Alexandra, the sea of satellite dishes reminds him who his main audience is.

THE PLOT OF LEGACY

Legacy, set in the multibillion investment world, focuses on the family of patriarch  Sebastian Price (Deon Lotz). He is approaching retirement and one  family member will soon need to take over the reins of Legacy Investment.

At the centre of the betrayal, lies and secrets are the current Mrs Price, Dineo (Kgomotso Christopher), Sebastian’s ex-wife, Angelique (Michelle Botes), a former lawyer but now a woman of leisure.

Best and worst dressed celebs at the 2020 SA Style Awards

Rachel Kolisi, Ayanda Thabethe, Blue Mbombo and more — here’s who nailed their wardrobe choices and who failed on the fashion front.
Lifestyle
1 year ago