At 51, the multi-talented British director has achieved more than most of his peers, writes Thembalethu Zulu 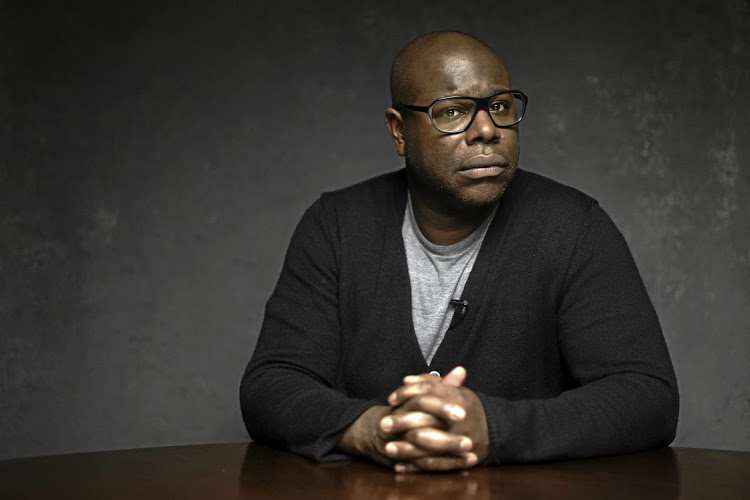 WHETSTONE: A decade after conceiving ’Small Axe’, Sir Steve McQueen has brought the anthology to the screen. The five films are grounded in the struggle for equality in the UK from the 1960s to the ’80s.
Image: BBC Studios

The prospect of interviewing Sir Steve McQueen is a daunting one. The Oscar winner, visual artist and knighted British filmmaker is one of the biggest cultural influencers right now, so when he yawns after my first question, panic sets in.

Gulp. It is not the start I expected. And perhaps he sees it. “Hold on, let me answer you properly,” he says, warming up. “Optimistic. I’m an optimist.”

We’re two minutes in and I have sweated through my shirt at the prospect of more terse responses for the 30 minutes I’ve been allocated. McQueen, dressed in a black hoodie and fashionable transparent-framed glasses, seems uninterested as he sips his coffee over Zoom.

But all is not lost as he moves into second gear with the change of topic to his latest work. Small Axe, about which he has agreed to be interviewed, is an anthology of five films set in Britain during the period from the late 1960s to the mid-’80s. The title comes from the Bob Marley song of the same name — “If you are the big tree, we are the small axe, ready to cut you down.”

Each film explores a history that many seem to have overlooked — that of the culture and challenges experienced by black immigrants of West Indian origin. The first of the films, Mangrove, is based on a true story about Frank Crichlow, whose West Indian restaurant, Mangrove, despite being drug-free, suffers relentless police raids. 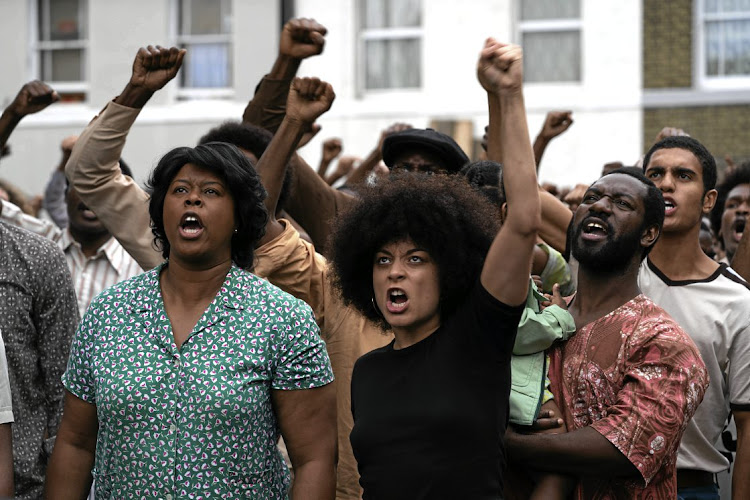 In protest, Crichlow and friends stage a peaceful march, which is met with police aggression. This results in the arrest of nine of the community’s leaders, including British Black Panther Movement leader Altheia Jones-LeCointe (Letitia Wright). Four of the five films are based on true stories. The exception is the love story Lovers Rock.

McQueen had the idea for the films over a decade ago. Why did it take him so long to make and release the project? “I don’t think I was emotionally or spiritually ready because I often think that looking back at your own past, it’s very difficult to get a perspective until a certain age,” he says, referring to his London upbringing with his parents of Grenadian and Trinidadian descent. “It changes, doesn’t it? As you mature it changes.”

At 51, McQueen has achieved more than most of his peers. A celebrated writer, producer and director, his previous work includes Hunger, 2011’s Shame and 2018’s star-studded heist drama Widows, starring Viola Davis.

All his films have been critically acclaimed, but it was the Oscar-winning 12 Years a Slave that shone the world’s spotlight on the director.

Despite the long time it took to complete his latest venture, is there perhaps something serendipitous about the timing of the release, considering the current sociopolitical climate around race?

McQueen does not agree. “The state of the world was always the state of the world. Unfortunately, it took a pandemic and a man [George Floyd] dying in this gruesome fashion, with a policeman with a knee on his neck, to get to the stage where the world is taking things into consideration. But it’s taken this amount of things to happen,” he says in his characteristic rapid speech. “I wish George Floyd was alive today, but he didn’t die in vain. That’s for sure.”

In an interview with Esquire UK, the director referred to Small Axe as being set during a “golden period of resistance”.

'Small Axe' is a powerful celebration of the black British experience

I ask what he makes of this current period of resistance, and he seems visibly irritated. “I’m not interested in the ‘golden age’… that, that’s …” he trips over his words. “It’s like the word revolution, I can’t stand it. I want change. I’m not interested in ‘revolution’. It’s almost like glamorizing the struggle. Struggle isn’t glamorous. It’s a struggle. I want change.”

McQueen is known to be vocal about issues of race, often speaking about his experiences as a black man, and how as a child he experienced institutionalised racism at school. Small Axe, he says, is therefore “a love letter to black resilience, triumph, hope, joy and love”.

“What’s interesting to me is to see how black people have shaped the UK,” he says. “How black people shaped it politically and socially. We have changed the fabric of the country.”

The last of the films, Red, White and Blue, is based on the real-life story of Leroy Logan, a London policeman who experienced “blatant racism” in the Metropolitan Police. The film stars John Boyega as Logan. Boyega’s portrayal came at a time when art seemed to mimic real life.

“What was interesting about John is at the same time as [shooting], he had that situation where he was at the march and made that speech,” McQueen says. Earlier this year, at the peak of the #BlackLivesMatter movement, the 28-year-old actor delivered an emotional speech denouncing the murder of Floyd in front of a huge crowd gathered at London’s Hyde Park. Realising the potential professional backlash for being racially outspoken, Boyega added: “Look, I don’t know if I’m going to have a career after this but f*** it.”

The career fragility experienced by many black creatives drives McQueen. In the making of this anthology, he insisted every department have a trainee who is a person of colour.

“I am nothing without other people. Nothing. Name me one person like me in the UK, in film … you can’t do that. What the hell is that about? I need to bring people up.”

So is he hopeful that change can come in this lifetime? “I always hope for that … but change is a slow-turning wheel.”

One wheel that does seem to be turning is that of the traditionally white Academy Awards. Earlier this year, the academy announced new rules around inclusivity, saying: “The aperture must widen to reflect our diverse global population in both the creation of motion pictures and in the audiences who connect with them … We believe these inclusion standards will be a catalyst for long-lasting, essential change in our industry.”

The suggested changes include the requirement to have at least two people from “underrepresented groups” heading departments and occupying leadership positions such as casting director, editor, producer and director.

In 2014, McQueen was the first black director to win Best Picture. He refers to the Oscars as Mount Everest and says that, despite the accolade, he is not even at base camp.

“I’m in training — altitude training. I want to make space for young black filmmakers to get involved in the industry so they can be their own person; young writers, editors, young screenwriters, directors and producers. That’s what I’m about.”

When I ask if winning the Oscar has opened doors for him, McQueen is quick to downplay the achievement. “Awards are great, they are very nice, but that’s not my focus. It’s always been the work.” 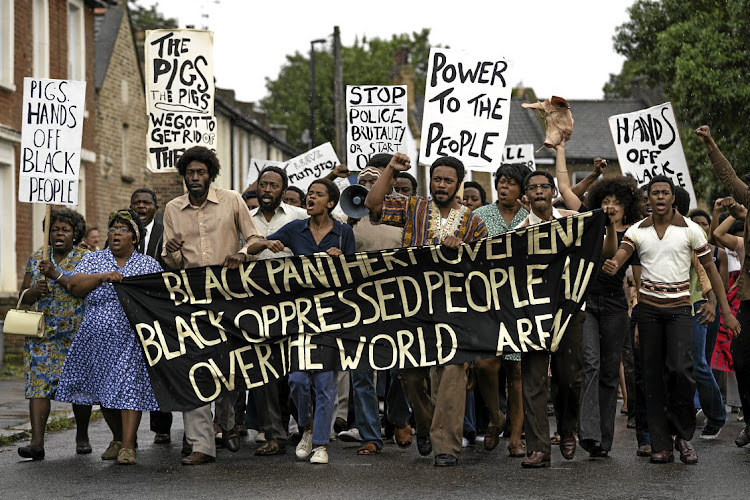 The Small Axe series is available for DStv compact subscribers across sub-Saharan Africa as well as on DStv Catch Up.
Image: A scene from the first film, Mangrove 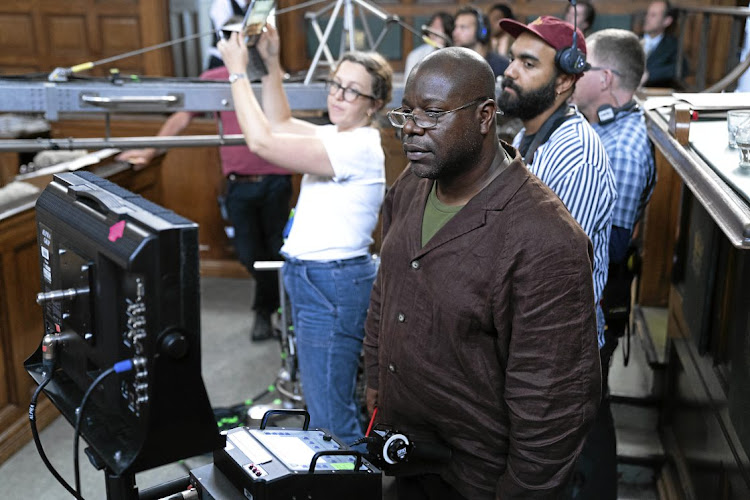 McQueen directing a courtroom scene in ’Mangrove’, the first film in ’Small Axe’. He says: ’Every time I go on set, I have to remind myself how I do things.’
Image: Kieron McCarron

His approach to his work is based on the idea that each film could be the last. “Every time I go on set, I have to remind myself how I do things. I remember the first night of making Small Axe, I didn’t sleep all night. I didn’t sleep, I was so nervous,” says McQueen.

For someone as accomplished as McQueen — recipient of an Oscar, a Golden Globe, the Turner Prize and several British Academy Film Awards — his trepidatious approach to each project is surprising. But he says it is the fear that drives him.

“The day I lose that is the day it’s over,” he says. The awareness of potential endings seems to be foremost in his general approach. One of his personal mantras is: “We’re all gonna die anyway, so get on with it.”

As the publicist asks me to wrap up our chat, I quickly ask what is the biggest lesson he has learnt in 2020. “Take it one day at a time,” he says. “You can’t control the future, but you can control what’s happening right now.”

In this action film, director Spike Lee sets the record straight on African-American participation in the Vietnam War, its legacy and its aftermath ...
Lifestyle
1 year ago