'Transplant' stands out in the oversaturated world of medical dramas 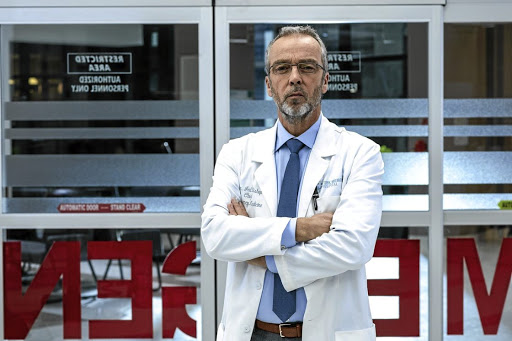 Since his breakout role as Matthew in Four Weddings and Funeral in 1994, Scottish actor John Hannah has become a familiar face.

Born in 1962 in Lanarkshire, Hannah left school to become an apprentice electrician before attending the Royal Scottish Academy of Music and Drama. His role in Four Weddings led to a career as one of the UK's most recognisable workhorse actors - appearing in a host of TV shows and films.

Hannah is now back on television screens in the Canadian medical drama Transplant, in which he plays Dr Jed Bishop, the gruff, no-nonsense head of the emergency department at the fictional York Memorial Hospital in Toronto.

The show's hook, which sets it apart from the other players in the familiar and oversaturated world of medical dramas, is that it follows the fortunes of Bashir "Bash" Hamed (Hamza Haq), a Syrian doctor living as a refugee in Canada before his quick thinking during an accident leads him to become a medical resident at York Memorial.

WATCH | The trailer for 'Transplant'

For Hannah, the show offered an opportunity to be a part of something fresh and original. "I think this kind of story being told on a mainstream platform will be interesting right from the start ... it seemed to be a story well worth telling in a time when so many people are on the move for so many different reasons and the crazy way that the world is trying to deal with it, or not. I think that in these very difficult times the show is original and asks pertinent questions about society in an entertaining and mainstream manner. I think that it starts a great conversation that people can have while enjoying the show as well."

The show has premiered in the US and Canada and has been renewed for a second season.

Hannah hopes Transplant will offer audiences a chance to think about issues, particularly in relation to refugees and their experiences in new countries.

"If we're lucky enough we have enough imagination to empathise or put ourselves in another person's shoes. And that's always got to be a good thing."

•'Transplant' airs on Universal TV (Channel 117 on DStv) on Mondays at 8pm.

As our emergence from the blur of 2020 is delayed by the ongoing global pandemic, the writer offers some new and entertaining escapes.
Lifestyle
1 year ago

Whether you've got an hour to spare or eight, these are the shows to spend it watching.
Lifestyle
1 year ago