I've asked my 'friends' to provide proof if I'm to believe Bill Gates is actually a reptile or the devil incarnate. It didn't go down well 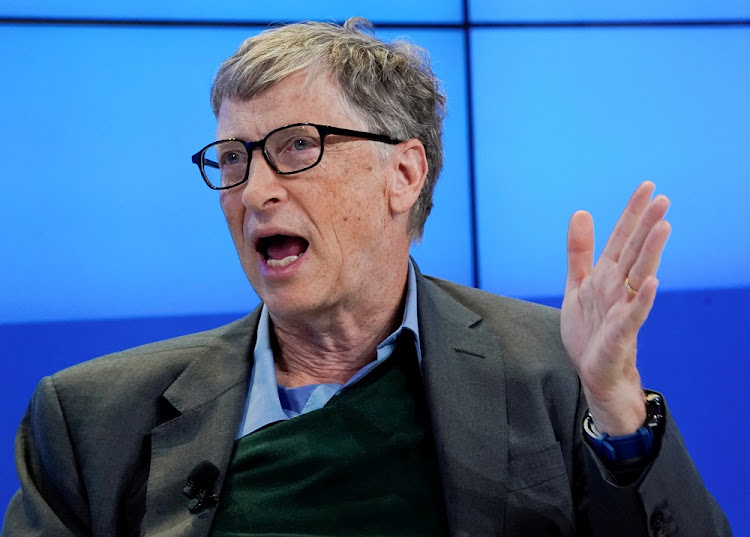 In conspiracy theory world, Bill Gates is the devil incarnate - hellbent on killing off half the planet while cashing in on our misery.
Image: Denis Balibouse/File Photo/Reuters

Conspiracy theorists are a rare breed living on the fringes of society, with weird beliefs like "the earth is flat". Or maybe it's hollow and there are other more advanced civilisations that we're thoroughly unaware of living inside it.

Until recently, I thought that was true, but in the last few months, owing to the imminent arrival of the Covid-19 vaccine, I'd be inclined to suggest that if there is an advanced civilisation out there, they should keep their distance from the lunacy engulfing this particular realm.

After our God-fearing Chief Justice Mogoeng Mogoeng's utterances about devils and 999-somethings in the vaccine and his subsequent refusal to denounce his dangerous theories, I posted on my Facebook page that I don't understand why anyone would be opposed to vaccines, a development that's served humanity for the better part of the past century.

Why do people buy in to crazy coronavirus conspiracy theories?

As Covid-19 spreads around the world, so too does fake news and myths about malevolent forces causing the pandemic, writes Monique Verduyn
Lifestyle
2 years ago

I realised that I have many conspiracy theorists roaming my social circle. I had thought this unfathomable. Surely no-one I know and consider a friend thinks 5G is the reason we have Covid-19 or that the virus was created in a lab with population control in mind? Boy, was I wrong!

"You need to stop reading the New York Times. Bill Gates is paying them," one comment said. "The vaccine is meant to alter our DNA," said another. "Bill Gates wants to get rid of half the planet" ... and so on.

I was amused by the Bill Gates obsession. In conspiracy theory world, Gates is the devil incarnate - hellbent on killing off half the planet while cashing in on our misery - so the theory that publications who tout medical advances, like the Covid-19 vaccine, are on his payroll checks out.

For a Marvel fan, this Thanos-level villainy is the stuff of blockbusters.

Naively believing these well-educated people of my generation could be somehow sensible and not completely nuts, I asked politely: "Much of what you're suggesting is easily debunked with a Google search. Do you have any proof or references for what you are claiming?" My question only stoked their fury. "You need to do your own research! A simple Google won't do!"

I was offered a link that I suppose is meant to be an example of thorough research. I have a general contempt for obscure websites that claim things like "Bill Gates is a reptile" but I was curious. Why did this particular fellow find this site credible?

The website's founder is a culinary school graduate (as I discovered from LinkedIn) with zero experience in medicine or science, let alone journalism or any research field that might grant credibility on any subject beyond meatballs and spaghetti.

And, for me, this is the problem with conspiracy theorists: according to them, no-one, except faceless people with internet access to God-knows-what, or discredited fringe scientists expelled from institutions, are credible.

Pointing this out made my now former Facebook friends very angry. They couldn't understand why I wanted to remain blind to the reality that our DNA is being harvested by (I suppose) the aliens who granted Bill Gates his billions. How dare I question these unshakeable facts delivered by the internet?

What followed over the next week was a barrage of links in my DMs. I eventually just couldn't take it anymore — the "unfriend" button came in handy.

While I'm happy to be able to switch off the noise, it doesn't assuage my concern. There are people among us who believe in things that many of us think are outlandish if we consider fact and logic.

They don't trust the government and they're sceptical of what they call "mainstream media". While many of us share those sentiments to varying degrees, it appears an ever-growing number of people are going further — believing things that are completely devoid of truth, never mind logic.

Considering the views of the former president of the US, and the lies he used to prop himself up, while calling everything he disagreed with "fake news", perhaps the prevalence of allergy to the truth shouldn't surprise us. These voices on Facebook aren't recluse loonies existing on the fringes of society. They're real people — and some of them are people we previously called our friends.

People fear Covid-19. But many South Africans are also scared of the vaccines that have been proved to offer protection against the virus.
News
1 year ago

Here's one way to deal with anti-vaccine messages in your WhatsApp groups.
News
1 year ago