The Supra is quick, comfortable and a sharp looker. So it's a bit of a mystery as to why we don't we see more of them on the roads 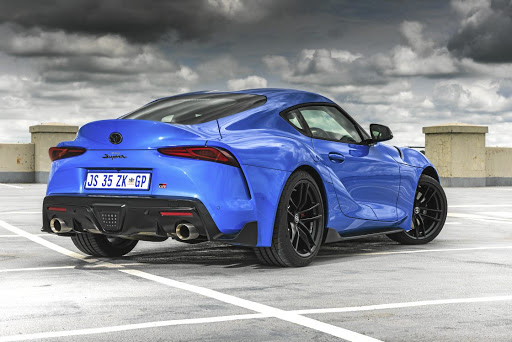 My optimism for 2021 was dampened somewhat when a stern e-mail blindsided me last week. The subject bar had a single, ominous word. Infringement with a capital "I" - I just knew the contents were going to be sombre. Opening the attachment revealed a grainy, blurry silhouette profiled down a Johannesburg road.

Yes, it was a speeding fine — the details of which will remain between me, the Johannesburg Metro Police Department (JMPD) and the rightful custodians of the Toyota GR Supra Horizon Blue in question.

For the record, I'm a mindful, cautious driver. Seriously. My colleagues associate me best with a slow, steady, economy-run style of operating a motor vehicle. All it took was one poorly-timed and absent-minded prod of the throttle to earn an unwanted selfie courtesy of law enforcement.

It has to be said, though, this is probably not the last time that JS 35 ZK GP is going to be photographed in such a manner in its lifetime.

Certain enthusiasts were ready to fall on their keyboards when they learnt that the revival of the Toyota Supra would involve the foundation of the ...
Motoring
1 year ago

To use a motoring journalism cliché, it looks as though it's moving fast even when standing still. A month and nearly 800km with the Supra affirmed just why the model is so well regarded among critics.

And among actual car buyers? That's a different story, it seems, because you hardly see examples of the model on our roads, even though Toyota are offering substantial discounts on the car.

Could the knowledge of its kinship with the BMW Z4 really be that much of a deterrent for those ardent Toyota purists? And do the shoppers who fall outside of this niche feel their sports-car needs would be better served by the BMW M2 Competition, Audi TT RS or Porsche 718 Cayman GTS?

At least take the Toyota for a spin. Give it the benefit of the doubt. It's something of a value champion in this company, with a price-tag starting at R1,011,300, replete with a standard level of equipment that would cost you considerably more in those other peers.

The Horizon Blue edition we drove goes for R1,163,900. And for your extra money you get more power, revised suspension geometry and a front strut brace. That is, of course, in addition to the bespoke pearlescent paint job and contrasting black alloys.

Output from the 2,998cc, six-cylinder, turbocharged mill is 285kW (from 250kW), while the torque figure remains at 500Nm. An eight-speed automatic is on duty as before. The Horizon Blue is marginally quicker to 100km/h than its standard counterpart: the sprint is now dispatched in 4.1 seconds instead of 4.3 seconds.

We asked virtually all the players in the sphere about what could be expected from their respective stables. Some had more to say than others.
Motoring
1 year ago

To drive, it is superior to the G29 Z4 on which it's based. But you knew that already: the rigidity afforded by that fixed metal ceiling gives the Supra a tautness and solidity that's instantly noticeable.

So, it's a rapid performer, as we've established, and it can scythe its way merrily through a stretch of ribboning asphalt, inspiring confidence in the driver as its well-accomplished chassis works in tandem with the Michelin Pilot Sport Cup rubber (255/35R19 front and 275/35R19 rear).

But the surprising thing about the Supra is how cosseting it can be, despite the low-profile rubber and performance-orientated suspension. It rides with more suppleness and compliance than expected. The cruising character of the car puts one in mind of a luxurious grand tourer, rather than a traditional sports car.

That makes it easy to live with as a daily chariot. The 290l luggage capacity is on par with what's offered by some B-segment hatchbacks. And if you keep a beady eye on your speed (and watch your modulation of the accelerator), your consumption figures can be reasonable too. Our long-term average was 11l/100km, with commutes that were largely around town, with a few highway stints in between.

It looks the part, offers strong performance, a surprisingly comfortable ride and is keenly priced in relation to its rivals. Hopefully it doesn't become one of those cars whose appeal is only fully realised once it's exited the market altogether.