The Black Death, Aids: How other pandemics 'prepared' us for Covid-19 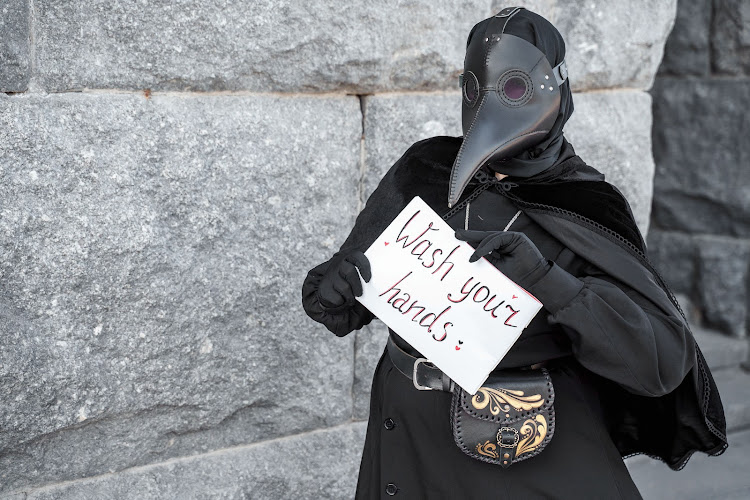 A man dressed as a medieval plague doctor shares a message to help stop the spread of today's pandemic.
Image: 123RF\Vitaly Davydov

The course of human history has been shaped by infectious diseases, and the current crisis certainly won’t be the last time.

However, we can capitalise on the knowledge gained from past experiences, and reflect on how we’re better off this time around.

1. THE PLAGUE OR ‘BLACK DEATH’

While outbreaks of the plague (caused by the bacterium Yersinia pestis) still occur in several parts of the world, there are two that are particularly infamous.

The 200-year long Plague of Justinian began in 541 CE, wiping out millions in several waves across Europe, North Africa and the Middle East and crimping the expansionary aspirations of the Roman Empire (although some scholars argue that its impact has been overstated).

Then there’s the better known 14th century pandemic, which likely emerged from China and decimated populations in Asia, Europe and Northern Africa.

Perhaps one of the greatest public health legacies to have emerged from the 14th century plague pandemic is the concept of “quarantine”, from the Venetian term “quarantena” meaning forty days.

The 14th century Black Death pandemic is thought to have catalysed enormous societal, economic, artistic and cultural reforms in Medieval Europe. It illustrates how infectious disease pandemics can be major turning points in history, with lasting impacts.

Various authorities lost credibility, since they were seen to have failed to protect communities from the overwhelming devastation of plague. People began to openly question long held certainties around societal structure, traditions, and religious orthodoxy.

This prompted fundamental shifts in peoples’ interactions and experience with religion, philosophy, and politics. The Renaissance period, which encouraged humanism and learning, soon followed.

The Black Death also had profound effects on art and literature, which took on more pessimistic and morbid themes. There were vivid depictions of violence and death in Biblical narratives, still seen in many Christian places of worship across Europe.

How Covid-19 will reshape our culture, and what unexpected influence it will have for generations to come is unknown. There are already clear economic changes arising from this outbreak, as some industries rise, others fall and some businesses seem likely to disappear forever.

Covid-19 may permanently normalise the use of virtual technologies for socialising, business, education, health care, religious worship and even government.

The 1918 “Spanish Flu” pandemic’s reputation as one of the deadliest in human history is due to a complex interplay between how the virus works, the immune response and the social context in which it spread.

It arose in a world left vulnerable by the preceding four years of World War 1. Malnutrition and overcrowding were common.

Around 500 million people were infected — a third of the global population at the time — leading to 50-100 million deaths.

A unique characteristic of infection was its tendency to kill healthy adults between the ages of 20 and 40.

Remembering Freddy | Grief and gratitude in a time of Covid-19

Covid-19 vaccines have hit SA: We answer three FAQs about the jabs

As the possibility of getting a Covid-19 jab will soon become a reality for some, questions have been raised about how the vaccine works.
Lifestyle
1 year ago

At the time, influenza infection was attributed to a bacterium (Haemophilus influenzas) rather than a virus. Antibiotics for secondary bacterial infections were still more than a decade away, and intensive care wards with mechanical ventilators were unheard of.

Clearly, our medical and scientific understanding of the ‘flu in 1918 made it difficult to combat. However, public health interventions, including quarantine, the use of face masks and bans on mass gatherings helped limit the spread in some areas, building on prior successes in controlling tuberculosis, cholera and other infectious diseases. 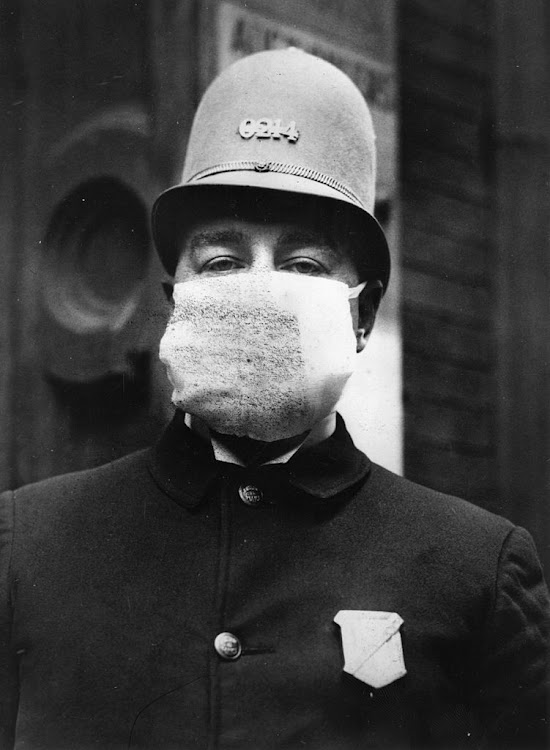 An American policeman wearing a 'flu mask' to protect himself from the outbreak of Spanish Flu following World War I.
Image: Topical Press Agency/Getty Images

Australia imposed maritime quarantine, requiring all arriving ships to be cleared by Commonwealth Quarantine Officials before disembarkation. That likely delayed and reduced the Spanish flu impact on Australia, and had secondary effects on the other Pacific Islands.

The effect of maritime quarantine was most striking in Western and American Samoa, with the latter enforcing strict quarantine and experiencing no deaths. By contrast, 25% of Western Samoans died, after influenza was introduced by a ship from New Zealand.

In some cities, mass gatherings were banned, and schools, churches, theatres, dance and pool halls closed.

In the US, cities that committed earlier, longer and more aggressively to social distancing interventions, not only saved lives, but also emerged economically stronger than those that didn’t.

Face masks and hand hygiene were popularised and sometimes enforced in cities.

In San Francisco, a Red Cross-led public education campaign was combined with mandatory mask-wearing outside the home.

This was tightly enforced in some jurisdictions by police officers issuing fines, and at times using weapons.

The first reported cases of HIV/AIDS in the Western world emerged in 1981.

Many readers may remember how baffling and frightening the HIV/AIDs pandemic was in the early days (and still is in many parts of the developing world).

We now understand that people living with HIV infection who are on treatment are far less likely to develop serious complications.

Scientists are optimistic they have found a new approach to prevent HIV infection.
Lifestyle
1 year ago

Condoms and PREP (short for “pre-exposure prophylaxis,” where people take an oral antiretroviral pill once a day), can be used by people who don’t have HIV infection to reduce the risk of acquiring the virus.

Unfortunately, there are currently no proven antivirals available for the prevention or treatment of Covid-19, though research is ongoing.

The HIV pandemic taught us about the value of a well-designed public health campaign, and the importance of contact tracing

The HIV pandemic taught us about the value of a well-designed public health campaign, and the importance of contact tracing. Broad testing in appropriate people is fundamental to this, to understand the extent of infection in the community and allow appropriately targeted individual and population-level interventions.

It also demonstrated that words and stigma matter; people need to feel they can test safely and be supported, rather than ostracised. Stigmatising language can fuel misconceptions, discrimination and discourage testing.

The current pandemic is the third coronavirus outbreak in the past two decades.

The first was in 2002, when SARS emerged from horseshoe bats in China and spread to at least 29 countries around the world, causing 8,098 cases and 774 deaths.

SARS was finally contained in July, 2003. SARS-CoV-2, however, appears much more easily spread than the original SARS coronavirus.

To some extent SARS was a practice run for Covid-19. Researchers focused on SARS and MERS (Middle Eastern Respiratory Syndrome, another coronavirus that remains a problem in selected regions), are providing important foundational research for potential vaccines against SARS-CoV-2.

Knowledge gleaned from SARS may also lead to antiviral drugs to treat the current virus.

Is the new Covid-19 variant, 501Y.V2, more deadly? Will existing vaccines work against it? We asked an expert from the National Institute for ...
Lifestyle
1 year ago

SARS also emphasised the importance of communication in a pandemic, and the need for frank, honest and timely information sharing.

Certainly, SARS was a catalyst for change in China; the government invested in enhanced surveillance systems, that facilitate the real time collection and communication of infectious diseases and syndromes from emergency departments back to a centralised government database.

This was coupled with the International Health Regulations, which requires the reporting of unusual and unexpected outbreaks of disease.

SARS demonstrated how quickly and comprehensively a virus could spread around the world in the era of air transportation, and the role of individual “superspreaders”.

SARS also underlined the importance of the inextricable link between human, animal and environmental health, known as “One Health”, that may facilitate the crossover of germs between species.

Finally, a crucial, but perhaps overlooked lesson from SARS is the need for sustained investment in vaccine and infectious disease treatment research.

Few infectious disease researchers were surprised when another coronavirus pandemic broke out. A globalised world, with overcrowded, well connected people and cities, where humans and animals live in close proximity, provides fertile conditions for infectious diseases.

We must be ever prepared for the emergence of another pandemic, and learn the lessons of history to navigate the next threat.

• The author of this article, David Griffin, is a infectious diseases fellow at Monash University in Australia. The co-author, Justin Denholm, is an associate professor at Melbourne Health.

• This article was originally published on The Conversation. Read the original here.

An ABC of Covid-19 and other global pandemics

Nadine Dreyer takes a look at how humanity is coping with the coronavirus — and how it previously handled such scourges.
Opinion & Analysis
2 years ago

Are you suffering from coronasomnia? An expert explains how Covid-19 can mess with your sleep

It could also have something to do with working from home.
Lifestyle
1 year ago

Five simple strategies to stay hopeful — even after Covid doomscrolling

If ever there were a time for a conversation about hope, it's now, writes clinical psychologist Jacqueline S Mattis
Lifestyle
1 year ago