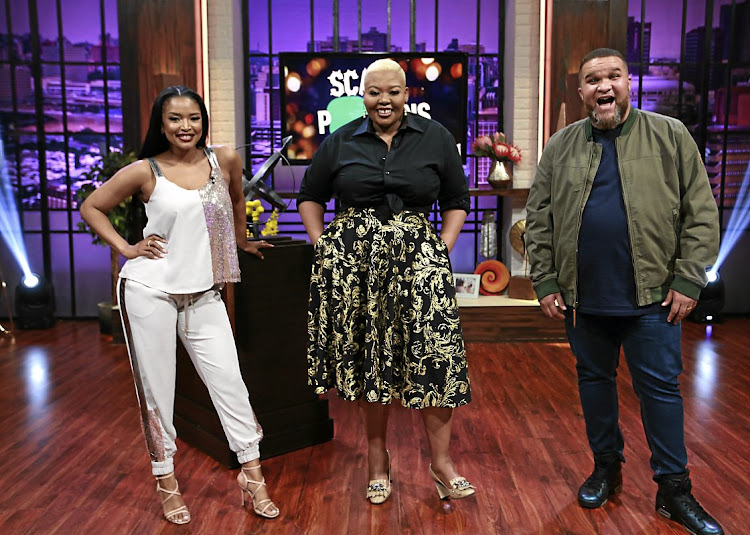 The South African version of the popular show Celebrity Game Night returns to screens tonight for a second season, in which its host Anele Mdoda promises: "The games are a lot better because we have the wisdom and knowledge of season 1 behind us."

A winner of a South African Film and Television Award last year, the show has one of those simple premises that at first might seem a little infuriating — celebrities compete against each other in teams for points as they play a series of parlour games.

But watching famous people do the things we all like to do turns out to have a certain intriguing charm and shows us that, as Mdoda points out, "these are celebrities who like to put their best foot forward but for that hour there's something that happens and winning takes over. Before people were celebrities they were human and humans love to win. I think that's what Celebrity Game Night brings out in them."

You might want to believe that it's all about the banter between Mdoda, her celebrity contestants and team captains Jason Goliath and Ayanda Thabethe, but the truth is that, for one hour, it's the points that are the point.

Mdoda says that she's watched as dolled-up stars have rushed to throw off their heels and shed their glamourous frocks in favour of more practical attire, let down their expensive hairdos and watch her tally the points with eagle eyes as they become obsessed with winning.

She offers the example of singer Majozi in season 1, who "sings these little love songs - and then the teeth came out. I was like, 'Whoa! Hello, Hulk! What's going on here?" It doesn't happen in a malicious way but yoh, people don't want to lose. That's why I stand far away from them."

Of course, things have changed somewhat over the last year and this season has been produced under strict coronavirus protocols. No more teams sitting together on big couches, instead contestants are all seated on their own couches at a suitably socially distanced space from each other.

Gone are the games that involved contestants touching or standing in close proximity to one another and Mdoda says that even off set with the crew, they lived in bubbles or pods. "The sound guys never saw the camera guys, we all met on set at different times so that we didn't bump into each other. It's a big setup with 60/70 people and no-one got Covid."

The games themselves are chosen by Mdoda and the production team from a basket of games but "ultimately what you're doing is taking 30 Seconds, Charades, Finish the Lyric and things like that and making different variants. We fine-tune the games and the questions to fit our celebrity and pop culture. The premise is international but the execution is local," says Mdoda.

Highlights from this season include rapper Kwesta, who Mdoda describes as "a pretty serious guy". She says: "He's got that deep voice — we've always been a bit scared of him, but when he came on the show he was like a fluffy rabbit, a marshmallow. He had so much fun and he was good entertainment."

There's also actress Terry Pheto who, Mdoda says, appears to be proud and queen-like with great posture but in the Celebrity Game Night studio she forgets about that when it comes to winning.

Celebrity brother and sister Lasizwe and Khanyi Mbau provide some sibling rivalry this season. "They're on the show on opposite teams and they know each other's tricks, especially when one of them is trying to cheat," says Mdoda.

Who is related to whom? Celebs and their famous relatives

Here some of SA's famous people and those to whom they are related.
Lifestyle
1 year ago

Mdoda says she believes the show provides an opportunity for families to get together in front of the television to enjoy a unifying moment in their busy, separate lives. This was illustrated to her recently when, while playing tennis, she was approached by a guy and his kids who came up to her and said: "We can't wait for Celebrity Game Night, it's our time to bond as a family because it's the one programme that our grandmother likes, Dad likes, Mom likes and the kids who are age 19, 17 and nine also like."

That, more than the accumulation of points by a group of well-known faces is, for its host, what the show is really about. She says she believes that, in these uncertain, stay-at-home times, having moments where we know that it's together time for "popcorn, juice, couch and Celebrity Game Night" is more important than winning awards or making beautiful sets.

She says: "The backbone of South Africa is the family and that's something we can contribute to bringing together every week, on an honest tip. That's why I do it."

Charismatic radio host Anele Mdoda will once again be taking a seat at the judges' table for the upcoming finale of the 2020 Miss SA pageant.
Lifestyle
1 year ago

Get a taste of 'Dinner at Somizi's': The celeb shares his fave recipes