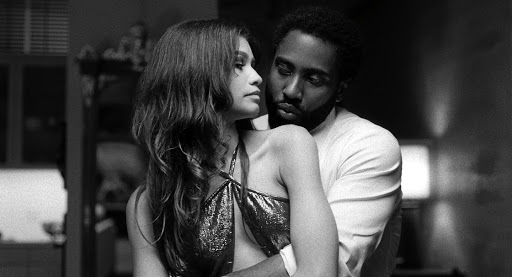 It's early in the morning in a suitably envy-inducing modernist mansion in the Hollywood hills. The cool silence of this carefully constructed monument to success and detached observation of the world below is soon shattered by the arrival of brashly self-confident film director Malcolm (John David Washington) and his beautiful but clearly bothered girlfriend Marie (Zendaya).

As she sets about making some early morning mac 'n cheese, he pours himself the first in a long line of whiskies, loosens his tie and pumps James Brown's Down and Out in New York City over the sound system.

Malcolm is on a high because the couple have just returned from the seemingly successful premiere of his latest film. He's overjoyed by the response of the audience and his apparent success at "kicking it out the park", but is perplexed and cynically amused by a white film critic's insistence on judging his work through the lens of his race. Despite this, he's buoyed by what seems to be the warranted recognition of his long, hard journey to bring his vision to the screen.

Marie nods as she lights a cigarette and waits for the macaroni to boil, but it's evident from her eye-rolling and well-timed frowns that she doesn't share in her partner's celebratory monologue - something is eating at her beneath her cool, glacially glamourous exterior.

As the night wears on, it's revealed that all is not right between Malcolm and Marie. What follows is a millennial, talk-heavy, emotionally bloody dissection of their personal flaws and an analysis of the tenuous strings of their co-dependent relationship. They're both narcissistic and self-involved and there's little to like about either Malcolm, Marie or director Sam Levinson's film.

The project was produced as a piece of lockdown experimentation to overcome Zendaya and Levinson's inability to move forward with their popular and critically acclaimed drama series Euphoria.

The artfully shot black and white two-hander is a messy, rambling and deeply unengaging attempt to offer a 21st-century version of the claustrophobic, high-stakes, emotionally manipulative, low-budget, inventive drama so successfully and energetically pioneered by independent maverick John Cassavetes. There's also a largely derivative dose of the nasty, raw-nerve relationship classic Who's Afraid of Virginia Woolf? thrown in to the muddy, bitter-tasting mix.

The problem with Levinson's film is not with its actors, both of whom throw themselves wholeheartedly into the material. Instead, it's the material itself - and characters with few endearing or relatable characteristics to root for. We're left to stew in the hell of watching a series of circular navel-gazing monologues that only serve to make us increasingly dislike both of these vapid, deeply boring egotists.

Malcolm's diatribe against the white critical establishment and its insistence on pigeonholing any examination of his work through the narrow lens of his race is indeed a valid criticism but in a film in which this sentiment has been shoved into the mouth of a black character by a white director, it rings horribly hollow as an attempt to strive for plaudits from a woke section of his audience. His own experience gives him no real access.

Zendaya uses the opportunity to show that she's more than the sum of her Disney darling and glamour model pasts, but she can't escape the traps of the dull, obvious, heavy-handed diatribes that she has to deliver.

Washington, for his part, does his best to try to create a sympathetic balance between Malcolm's deep insecurity and his bristling self-involvement, but ultimately both the actors are stuck in a drawn-out, exhausting and relentless series of nauseating solipsistic ramblings.

By the time its very tiring 106 minutes draw to a close, the film, in spite of its committed performances, admirably coolly-executed cinematography and hip soundtrack, has failed to convince us of any real reason for its existence.

It all plays like an interminable, depressing, disappointingly overblown final-year film school project that, rather than showing that glamourous, creative people who stalk the halls of elegant hill-topped modernist eagle's nests might have the same relatable human insecurities and fears as the rest of us - just reminds us that they really shouldn't throw stones.

• 'Malcolm & Marie' is available on Netflix.

The best movies and series to binge on Netflix, Showmax and Apple TV
Lifestyle
7 months ago

The former king of British cinema makes a desperate attempt to relive past glories. Someone tell him times have changed and movies have changed with ...
Lifestyle
1 year ago