'If you want to change the world, you have to know how power mutated' teases the trailer for documentarian Adam Curtis's new six-part series 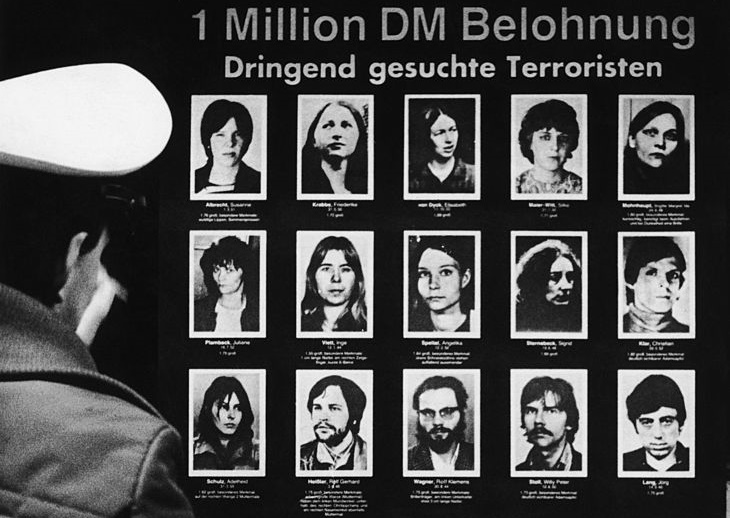 A wanted poster for members of the Baader-Meinhof Gang. This group of violent German idealists are explored in the documentary 'Can't Get You Out of My Head'.
Image: Keystone/Hulton Archive/Getty Images

Over the past 30 years British documentarian Adam Curtis has established himself as the singular most brilliant deployer of archive footage.

Curtis's latest offering, the six-part BBC series Can't Get You Out of My Head, builds on some of his previous investigations of the effects of the battle between individual identity, psychology and expression and the groupthink of political organisation in society. But the series also adds a new perspective.

Twisting through time and threading several overarching stories of forgotten characters from the recent past of the 20th century, the film presents a depressing vision. The primal forces that govern human behaviour continue to be humanity's greatest obstacle to achieving Utopia in which we all get along and look out for each other and look after the world we inhabit.

There is the story of Chairman Mao's fourth wife, Jiang Qing. Her belief in the power of her will to shape not just her own destiny but that of China unleashed the horrors of the Cultural Revolution.

There is the British black power activist Michael X who began life as a Trinidadian immigrant gangster before reinventing himself as a civil rights activist and then fell from grace as an outlaw marijuana smuggler and murderer who was sentenced to death in his native land.

WATCH | 'Can't Get You Out Of My Head' trailer.

There are also the violent idealists of the 1970s German left, like the Baader-Meinhof Gang and Red Brigade who, in their determination to expose the hypocrisies of their parents' Nazi complicity, ended up perpetrating the same terrible acts of prejudice as the generation before them.

Never mind the army friend of Lee Harvey Oswald who, determined not to believe in the conspiracies that surrounded his friend's involvement in the Kennedy assassination, began to invent conspiracy theories as a means of exposing their absurdity only to end up believing in them himself.

There are cameos from Tupac Shakur's mother, the Black Panther activist Afeni Shakur - whose story demonstrates the thin line that separated the anti-government actions of her militant group from the actions of the FBI agents tasked with infiltrating it and bringing it down - and an early British trans-rights activist whose story lays down some bigger fights that would find their ultimate expression in the war over Brexit.

All of this is elegantly and poetically underlined by Curtis's love of pop music and an attention to detail that serves to make the experience as emotional as watching a more directly manipulative, heavy-handed piece of cinematic activism.

Can't Get You Out of My Head leaves you unable to get his big ideas out of your head.

• 'Can't Get You Out of My Head' is available on YouTube.

'Crazy, Not Insane' explores the life's work of a serial killer researcher

'The White Tiger' exposes the harsh realities of India's inequality

Based on the award-winning book of the same name, this film is a hugely entertaining and thoughtful examination of what it takes to achieve success ...
Lifestyle
4 months ago