The natural historian talks about his new doccie series, 'A Perfect Planet', and what he's been getting up to while stuck at home during the pandemic 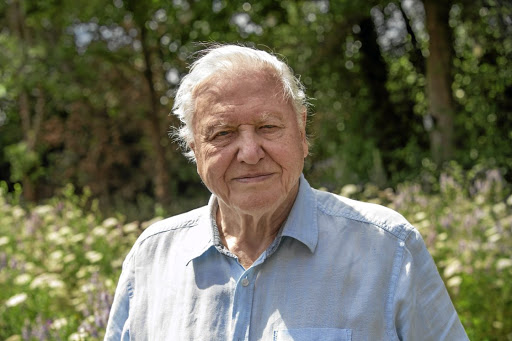 Hearing Sir David Attenborough narrate the latest BBC Earth documentary, I'd never have guessed he'd done the voice recording in his own garden.

The filming for the new series, A Perfect Planet, wrapped before the world was forced into a mass lockdown, but Attenborough's description of the process of recording the narration is like listening to his childhood memories of building a fort.

"I've a reasonably-sized garden and I have a dining room that has windows which open into that garden," Attenborough explains over a Zoom call.

"In the dining room we hung duvets all around the walls, so that it knocked out all the echoes that you'd otherwise have gotten."

Running a Zoom call and transmitting the footage from Bristol, he sat with a microphone in front of him and ran a lead through a crack in his dining-room window into the garden, where a voice recorder was perched on his lawn.

More surprising than this home-made setup for one of the world's most famous natural historians, perhaps, is the fact that the BBC continually find new stories for him to tell.

"I don't know how long we can go on finding new things to say and new ways to say them but throughout my last 60 years, every year there's been a major technical improvement which has made it easier for us to tell stories in new ways," Attenborough says.

One such story is that of the 2-million lesser flamingos that flock to Lake Natron in Tanzania to breed when the conditions are just right.

Sitting at the foot of Ol Doinyo Lengai, one of Africa's most active volcanoes, the water is so alkaline in some places it can burn the human skin. This story has been filmed before — but never with a drone, that has now captured views of flamingos in the middle of the lake from above.

Last year Attenborough released one of his most moving documentary films yet, A Life on Our Planet. Calling it his "witness statement", Attenborough painted a very emotive picture of where the world is heading if humans don't literally clean up their act.

A Perfect Planet reverts to Attenborough's more traditional format. The six-part series explores how the forces of nature work in synergy to make our planet just perfect — how volcanoes, solar energy, the weather and ocean currents shape and support life on Earth.

I always marvel at how the beautiful videography, together with Attenborough's narration, has the power to elicit empathy for even the most monstrous-looking creatures. How unimaginable worlds come to life on the screen and nature's colours are painted in strikingly vivid strokes.

If you consider the work that goes into producing the series, it's not surprising. Huw Cordey, the producer, started work on the series in January 2016. Ideally, you would need at least a year to plan a series of this kind and two years to shoot. They spent four years filming.

The days of making nature documentaries without touching on the ever-present human threat to the planet are over. This series in no way departs from Attenborough's previous messages.

Each episode touches on what's at stake in these perfect systems if humans don't change their ways, and the final episode considers the impact of the world's newest force of nature — humans.

It's as difficult to watch as it is hopeful and Attenborough's message rings out clear: "We have the capacity and knowledge to stop the damage we're doing. What we don't have is time."

Doing the narration of A Perfect Planet is just one of the things that kept Attenborough busy last year.

Between March and the end of November last year, he left the house only twice — to visit the dentist.

Boredom, however, doesn't seem to be a word Attenborough is acquainted with and he insists he has a million things to do. He still hasn't sorted out sections of his library that "went and got themselves in a frightful muddle", and despite his best efforts he still hasn't documented all the geological specimens that have been collecting in his cellar over the years.

He uses Zoom to regularly talk to his son who lives in Cambridge, and he's spent some time analysing human interaction over the video communication app.

"When I turn off the Zoom I do actually think there's been somebody else here. And we speak in a quite different way to one another than we do on the telephone. What that shows is that there's an element of human behaviour that's different when there's a visual element in our conversations — seeing each other is a major part of how we communicate with one another."

He also keeps busy writing commentaries and answering letters from his viewers — he receives between 50 and 70 a day.

And if you didn't know, Attenborough quite enjoys playing a tune or two on the piano. If ever you find yourself on a Zoom call with him, he might just offer to play some music for you as the call fades out.

'The Adventures of a Young Naturalist - The Zoo Quest Expeditions' is an invaluable record of David Attenborough's first quests to film strange ...
Lifestyle
4 years ago

The series Seven Worlds, One Planet is the biggest series on biodiversity produced to date
Lifestyle
1 year ago

WATCH | I can only hope it gave people hope, says filmmaker on 'My Octopus Teacher'

My Octopus Teacher, the remarkable underwater love story, has inspired a string of memes, spoofs and even a mockumentary.
Opinion & Analysis
1 year ago