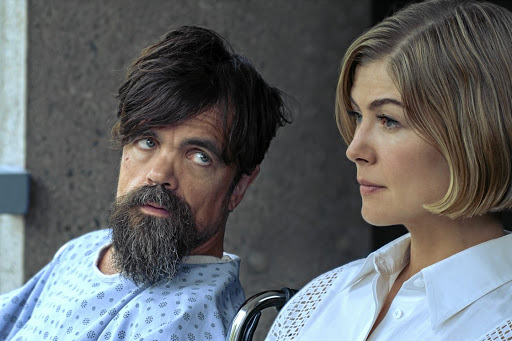 Peter Dinklage as Russian mobster Roman and Rosamund Pike as Marla Grayson in 'I Care a Lot'.
Image: Netflix

Rosamund Pike offers her steeliest, most glacial turn since 2014's Gone Girl in this vicious little black satire of the follies of late capitalist America and the ruthless grifters who work its loopholes to their financial advantage.

Directed by J Blakeson, I Care a Lot offers a cynical vision of a world in which the weak are prey to those wolves who are indifferent and cold enough to work the system for personal gain.

Pike - complete with severe, carefully angled bob, icy smile and an archly delivered voiceover dissection of the absurdities of the situation she's exploiting - cuts through her environment like an angel of death bent on extracting every last penny from the victims of the simple con game she's perfected.

She plays Marla Grayson, a woman who's crafted a unique place in the flawed system of government policy with regard to elderly care. She swoops in as a state-appointed guardian for old people who are deemed incapable of taking care of themselves.

Once she's appointed as their guardian angel, she and her business partner and lover Fran (Eiza González) sweep them off to a care facility, cut them off from their families and set about stripping their homes and any assets they might have for their own profit. It's all legally sanctioned, above board and sustained by a network of relationships with various players in the system to ensure that, by the time anyone figures out what's going on, it's too late to do anything about it.

But when Marla and Fran try to work their con on an unaware "cherry" target - a wealthy woman with no apparent family and plenty of Fabergé and other expensive tchotchkes to sell off - they get more than they bargained for.

It becomes clear that sweet little old lady Jennifer Peterson (Dianne Wiest) is not what she seems and they may have finally messed with the wrong OAP. Peterson is far from the golden goose Marla pegged her for and she has a son, a coolly menacing, angry former Russian mobster named Roman (Peter Dinklage) who loves his mom and is intent on getting her out of the facility she's been dumped in.

Blakeson sets up an increasingly horrible and violent conflict between two equally dislikeable foes that will provide plenty of darkly comic twists and turns while also leaving you feeling a little scarred and queasy by the end as you realise that in this bleak, immoral playing field, both teams are made up of terrible players who don't deserve any sympathy and make you hate the world that allows them to play their torrid games.

There's no real back story here for Marla - no tearful revelation of an abusive childhood or mistreatment by a grandparent to warrant her actions - and Pike revels in the space she's given to be a monstrous villain who makes no apologies for her actions.

Dinklage offers a nice hangdog foil to Marla's icy indifference and the whole sordid affair ticks along towards its slightly weak, third act resolution, which isn't quite as surprising or satisfying as it should be.

Blakeson holds it together with wit, pace and a nicely garish over-the-top colour palette that hammers home the point that beneath the chocolate-box trappings of middle-class, suburban, modern American life lie the undigestible, selfish, squalid truths of the darker side of human nature.

If, by the end of it all, you're a little weary and battered by the sheer nihilism of the characters and their story, that's unfortunately a consequence of the times we live in.

It may not always be as smart as it wants you to believe it is, and its half-hearted attempts to occasionally make you feel something for its characters don't succeed, but overall it's a good, bitter spoonful of salty cinematic medicine that's carried by a standout performance from Pike in a mean-spirited tale that leaves an uncomfortable metallic aftertaste in the throat that's hard to get rid of.

• 'I Care a Lot' is available on Netflix

The theme of this solid, if sometimes slow, film resonates in a world recently devastated by the insanity of fake news
Lifestyle
1 year ago

You'd expect more from the origins story of one of cinema's most memorable villains, Nurse Ratched
Lifestyle
1 year ago